Lync manages office communications such as voice calls, video calls, instant messages, meetings, and shared whiteboard sessions all from a single interface. If this sounds like OCS, then you're right, it is the new improved version. Johan explains the background, why it is better, and how you can get started with it.

Microsoft Lync 2010 is the replacement for Office Communications Server (OCS). Lync, just like OCS, manages various forms of communication from a single user-interface: voice calls, video calls, instant messages, meetings, and shared whiteboard sessions. It works with Office, SharePoint and Exchange: It makes it possible to converse with other people, such as the users of Windows Live Messenger.

On the 22nd of March 2010 at VoiceCon Microsoft officially announced Lync, at that moment called Wave “14”. Some features were presented to the public: Call Admission Control, Location Awareness, Branch Office Survivability and tighter integration with SharePoint, Office and Exchange.

In the background a Technology Adoption Program (TAP) program had already started with several customers and partners.

In June 2010 Microsoft gave a lot more information at TechEd North America, which was held in Orlando. Many presentations were given that included demos. These were then published on TechEd online.

On the 13th of September Microsoft released the release candidate (RC) of Communications Server “14” also then known as Wave “14”.

Some people might think “Why Lync?” That was my reaction too. On this Technet Blog Kirk Gregersen, Senior Director Microsoft Communications, explains how they have chosen the name. Lync is a combination of “link” and “sync” and is chosen because Microsoft wanted a new name that reflected the major transformation of the product.

On the 17th of November Lync reached the General Availability (GA) Status.

In this table, we give the “new” names of all the members of the product family:

Because it would create an enormous article to list all the new features, we will now have a look at just a few of the more interesting ones offered by Microsoft Lync Server 2010.

In Office Communications Server 2007 R2, the configuration was stored in several places: Active Directory, SQL database and local on the server. Starting from Lync, a Central Management Store is used to store the configuration for all server roles. To be more specific, the following information will be stored in the database:

In case of an Enterprise pool, this database is placed on a dedicated SQL server. When using a Standard pool, a local installation of SQL 2008 Express will be installed on the first Front End Server and the Central Management Store database will be stored on that server.

The update process can be divided into the following steps:

The replication traffic between the Edge server(s) and the CMS will be performed by using HTTPS. If security policies will not allow this, a manual update will need to be performed every time the configuration is changed.

Lync has two management utilities: Lync Server Windows PowerShell, and the Lync Server 2010 Control Panel. The PowerShell modules can be used for several tasks and are equivalent to the Exchange Management Shell of Exchange 2010.

The GUI uses Silverlight; which has the consequence that one of the requirements for using the tool is the latest version of Silverlight. If it isn’t detected during the startup it will display both a warning and a link to download Silverlight: So there is no MMC for Lync anymore.

Just like Exchange 2010, Microsoft Lync Server 2010 now also contains Role-Based Access Control, RBAC for short. Using RBAC, administrative privileges can be added to users using pre-defined administrative roles. Depending on the role assigned to a user he or she can perform tasks using either the Lync Management Shell or Lync Control Panel. Lync does contain 11 predefined RBAC-roles. Besides these predefined roles you can create custom roles yourself.

A complete overview of predefined RBAC-roles and the associated cmdlets can be found here.

If you have several branch offices you might not want to deploy a complete Lync environment to offer the Enterprise voice functionality. Microsoft introduced two options for this specific case:

Both the SBA and SBS can be configured as backup registrar for the users in the branch office. If a WAN link failure occurs, then users will re-register with the backup registrar and can continue to use basic voice functionalities.

Can a SBA or SBS host users? Yes, both solutions can host users: Before doing this, verify that the PSTN connectivity works correctly.

In the previous paragraphs we had a look at a server side of Lync. In this paragraph we will have a look at what has been improved or changed for the end user. 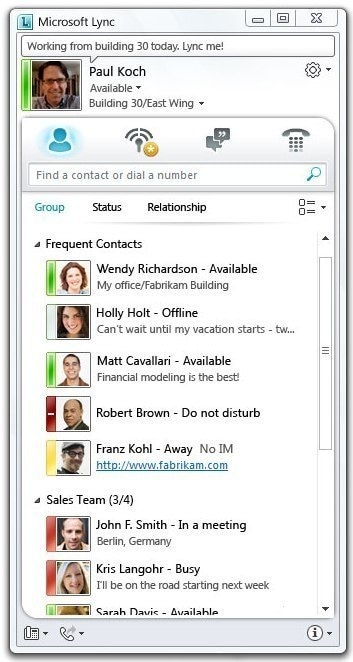 As you can see in this screenshot, the look of the client has completely changed. We can split up the client window into a few parts:

Besides searching for contacts on their name you will now have the opportunity to search for people based on their skills. This functionality does require at least SharePoint 2007 and will enable you to search in the profiles of users.

There are two ways to start the implementation of Lync:

The first option might look a little bit strange to you. How could you start an implementation with a planning tool that is, in most cases, used before the implementation? Well, you’re completely right about this; but, starting from Lync, you can use the output from the planning tool as input for the setup. The planning tool can be downloaded for free from this website.

The other option can be compared to the method which was available in OCS 2007 R2.

Before starting the installation you will need to install some prerequisites. First start with .NET 3.5 SP1 and the hotfixes mentioned in KB959209 and KB967190. Once these are installed the Web Server Role needs to be installed with some additional features. This can be done by running the following cmdlet:

Once everything is installed you can start the setup of Lync.

The same steps are required for preparing the Active Directory as with OCS 2007 R2, so I do not need to explain them. Make sure you’ve got a backup of your Active Directory environment and try the installation in a test environment if possible, before deploying it in a production environment. Depending on your deployment, you will either choose the option to deploy the first Front End Server (only used for standard edition) or install the Topology Builder:

In Lync you won’t deploy a pool immediately but first will create a configuration using the Topology Builder.

When you’ve finished building your Lync environment, it’s time to publish the configuration to the Central Management Store. Once this is done, you can deploy the servers. Each server will look in the Central Management Store to determine which components it needs to install during the setup. This has the advantage that you don’t have to select the components manually anymore, because you’ve already specified them. 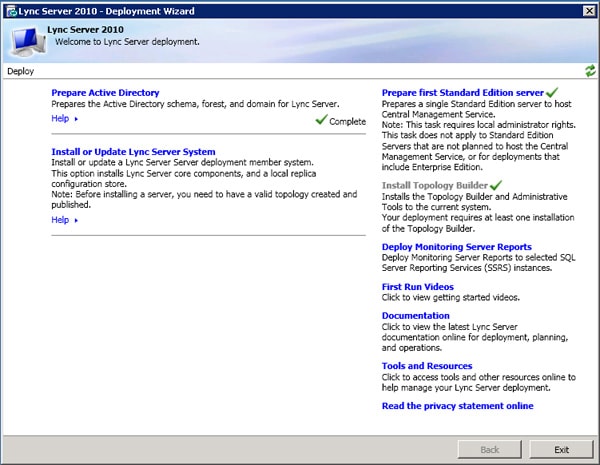 The setup can be started by selecting the option ‘Install or Update Lync Server System’. The first step is to install the local configuration store by selecting the ‘Install Local Configuration Store’. This will install a SQL 2008 Express instance with a replica of the CMS database. Once the local configuration store is installed, select the ‘Setup or Remove Server Components’. You will receive a prompt to select the method which should be used to gather the configuration file. As long as you can reach the CMS, you should leave the default option checked, which is ‘retrieve directly from the Central Management Store’. The second option, ‘import from a file’, is only needed when performing the installation of the Edge Server.

When you make a change to the topology, for example by adding the conferencing feature, you will need to run the setup again and select the ‘Install or Update Lync Server System’ option.

When the certificate is installed it’s time to start the Lync services: This can be done by selecting the Start Services option. Once this task has been performed you have the option to check if all services are running by selecting the Check Services button. This will launch services.msc which will give you the ability to check if all services have the started state.

Johan Veldhuis is a Techncial Consultant for Communicativ. Prior to working for Communicativ Johan worked several years for AXIANS a system integrator in The Netherlands, first as service desk engineer and later as server & storage engineer. Johan is a MCSE-M and MCITP and was awarded the Microsoft MVP Award (Exchange Server) for his contributions to the messaging and collaboration community. Johan has also his own website where he blogs and publishes tutorials mostly about Exchange. You can reach Johan at j.veldhuis@communicativ.nl. j.veldhuis@communicativ.nl or follow him on twitter via @jveldh

View all articles by Johan Veldhuis

Migrating to Microsoft BPOS - Part I

By now, you've probably heard of Microsoft's latest foray into the PaaS arena - Office 365 - but you might not know that Microsoft's BPOS offering is going to be a component of this latest incarnation. If you're considering either of these platforms, Johan Veldhuis' clear and comprehensive guide to Migrating from Exchange to BPOS is essential reading.… Read more