Installing Hyper-V and Beyond

In his previous article "Hyper-V, an introduction" Jaap Wesselius explained about the Hypervisor, the parent partition, the child partition, and Integration Components. In this article Jaap discusses installing Hyper-V, all kinds of Virtual Hard Disks, Virtual Networks, and some best practices.

Furthermore you need plenty of physical memory in the server. For testing purposes the absolute minimum is 4 GB of memory, the amount of memory needed in a production environment is dependant of the services you want to run.

Windows Server 2008 Hyper-V is a Server Role in the Standard Edition, Enterprise Edition and the Datacenter Edition. From a technical perspective there’s no difference, it’s a licensing issue:

Note: There’s also a Hyper-V Server available. This is a very small Operating System (command-line based) that’s only capable of running the Hypervisor, nothing else. There are a few graphical UI’s, like the date and time applet, but it’s mainly command-line. Hyper-V Server is a free download, but when configuring Virtual Machines you need one license for each Virtual Machine!

Logon to the server and open the Server Manager. In the left pane select “Roles” and in the right pane you’ll see “Roles: 0 of 18 installed”. Click on “Add Roles” and select “Hyper-V” in the Select Server Roles Window. 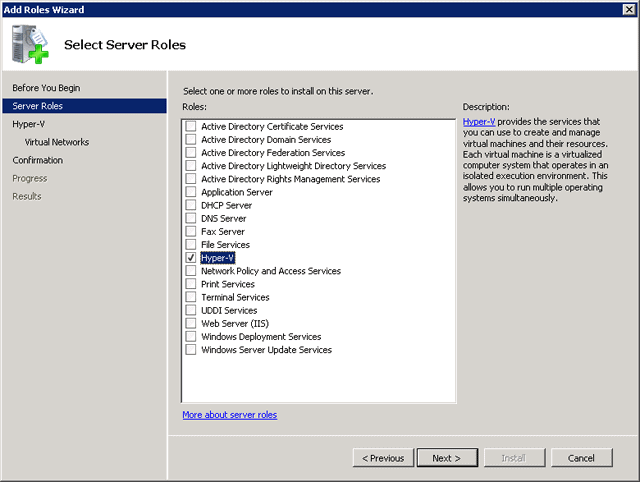 Click Next to install the Hyper-V Server role. The wizard also includes the possibility to create Virtual Networks. We’ll cover that later in this article so leave all options blank and click Next to continue. 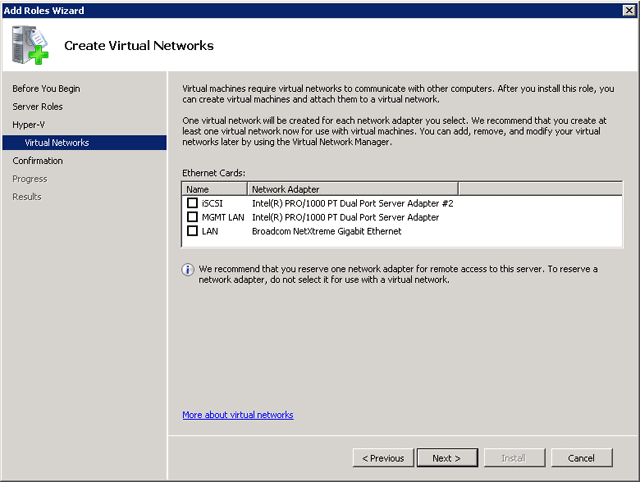 Figure 2. In the Add Roles wizard there’s the possibility to create Virtual Networks. You can create these later as well.

When you logon after rebooting you’ll see nothing special, it just looks like Windows Server 2008, and it is…. The only new part is the Hyper-V Manager that can be found in the “Administrative Tools” menu.

The Hyper-V Manager is an MMC snap-in, with a server pane (left), a results pane (middle) and an actions pane (right). In the server pane you’ll see only the server that you’re logged on to, additional Hyper-V servers can be added later on. 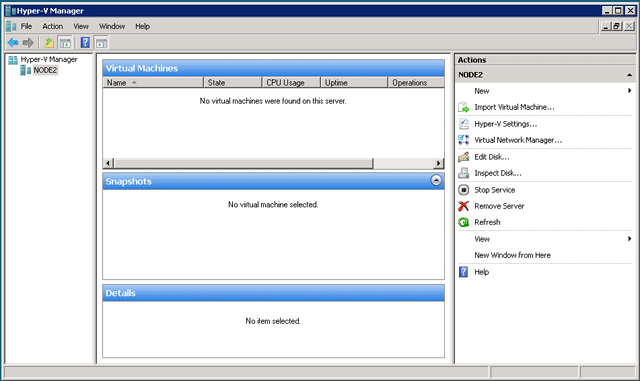 One of the first things that has to be done is changing the settings. Click on “Hyper-V Settings…” in the actions pane and enter new paths for the Virtual Hard Disks and the Virtual Machine. By default these will be placed on the C:\ drive, but from a performance perspective these should be configured on a separate drive. This can be a physical disk in the server, a storage cabinet attached to the server or a SAN (iSCSI or Fiber). 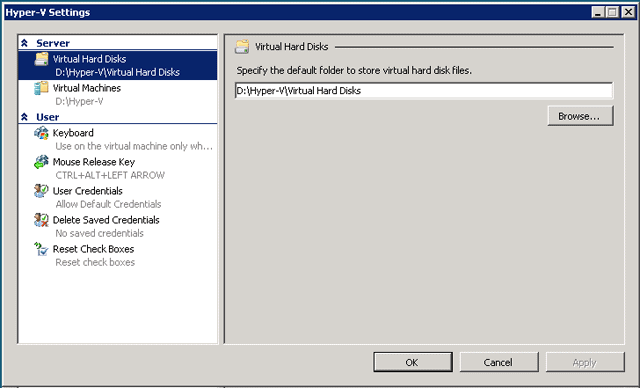 There’s also a fourth type of disk, the pass-through or dedicated disk. This is a dedicated disk on the Parent Partition that’s connected to a disk controller of a Virtual Machine. The complete disk is used in this configuration without the VHD file. Therefore it has no overhead. Besides the fixed size disk Microsoft also recommends using this kind of disk in a production environment. Check the Technet site for more information.

The pass-through disk can be a physical hard disk in the Hyper-V host, but it can also be a LUN on an iSCSI or Fiber Channel SAN.

To create a new Virtual Hard Disk open the Hyper-V Manager, in the Actions Pane click New and select “Hard Disk…”. The New Virtual Hard Disk Wizards shows up with a welcome screen. Click Next to continue. In the Choose Disk Type window you can select what type of VHD needs to be created. Please be aware that creating a large fixed VHD file will take a considerable amount of time!

I will cover a dedicated or pass-through disk later in this article, after the creation of a Virtual Machine.

By default Virtual Machines are not connected to any network, so they are pretty useless actually. To connect Virtual Machine to each other, to the Parent Partition or to the network outside the Hyper-V host Virtual Networks need to be used.

So, for having a Virtual Machine communicating with the outside world we have to create an External Virtual Network. Logon to the server and open the Hyper-V Manager. In the tasks pane select the Virtual Network Manager.

Click Add, enter a name like “Public Virtual Network” and select the network interface that needs to be used by this Virtual Network. In this example this is the first Broadcom that’s available. 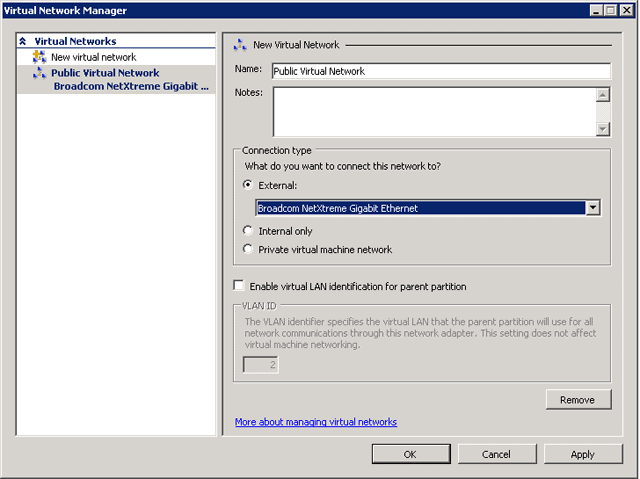 Figure 4. During creation of an External Private Network you have to select the physical network interface.

When you click OK the new Virtual Network will be created. A warning message will pop-up indicating you may temporarily lose network connectivity with the Hyper-V host. If you’re connected via a Remote Desktop sessions you may have to re-establish the connection.

Figure 5. The new Network Connection after the creation of a External Virtual Network

On Hyper-V there are two types of Virtual machines, Supported and Unsupported Guest Operating Systems. This has nothing to do with the ability to run in a Hyper-V Virtual Machine, but whether it is directly supported by Microsoft:

Suse Linux Enterprise Server is a Supported Guest Operating System. This will run under Hyper-V and if you encounter an issue you can call Microsoft Product Support. SCO Unix is an Unsupported Guest Operating System. This will run perfectly under Hyper-V but it is not supported by Microsoft, but fully supported by SCO. For more information check the site of SCO:

Now we are going to create a Virtual Machine running Windows Sever 2003 SP2. You can use the Windows installation CD or you can use an ISO image. The latter is usually faster. 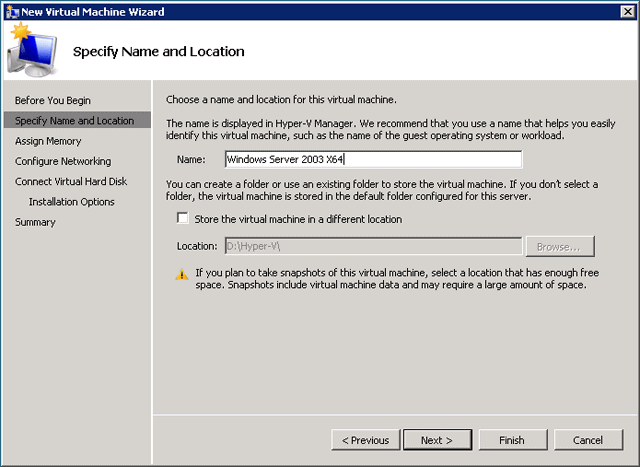 The location will be same as we configured in the Hyper-V settings earlier in this article. You can check the “Store the virtual machine in a different location” checkbox when you want to have the new Virtual Machine on another location (i.e. another disk). Click Next to continue.

The new Virtual Machine needs a Virtual Hard Disk (VHD) to use. Since we did not create a VHD in advance use the default setting “Create a Virtual hard disk”: 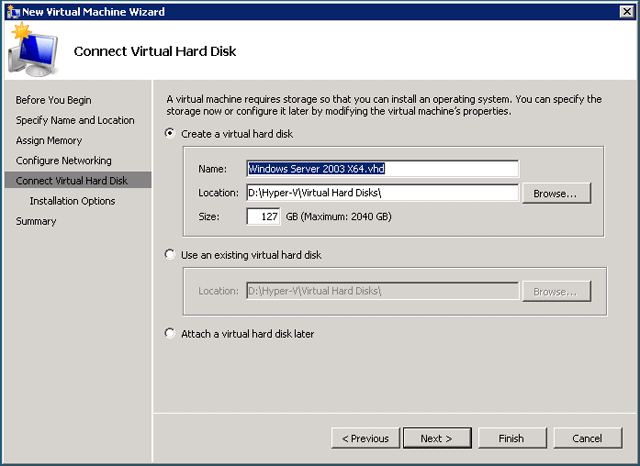 Figure 7. A new Virtual Hard Disk will be created

If we created a Virtual hard Disk in advance, for example a fixed size Virtual Hard disk you have to select “use an existing virtual hard disk” and select the Virtual Hard Disk in the Location field. If you’re using disk intensive applications like SQL Server, MySQL or Exchange Server fixed disks or pass-through disks should be used for best performance. Click Next to Continue.

Since we will be installing a new Operating System we have to select the installation media. This can either be a CD/DVD or an ISO image, whichever your prefer.

Note: If you are accessing the Hyper-V server using Remote Desktop then it’s not possible to use your mouse in the new Virtual Machine until you’ve installed the Integration Components. And Integration Components can only be installed after finalizing the setup of Windows, so the setup itself can be challenging. When you have access to the console itself then it’s no problem and the mouse works as expected.

Using a dedicated or pass-through disk

Creating a dedicated or pass-through disk requires a different approach. This is not really a Virtual Disk, but it is a physical disk connected to a virtual disk controller in a Virtual Machine. On the Hyper-V server, open the Server Manager and under storage select Disk Management. Make sure that the disk you want to use as a dedicated disk is Offline. This will ensure that the Parent Partition cannot access the disk. If it can access the disk, and write data on it, it will give unpredictable results in the Virtual Machine! 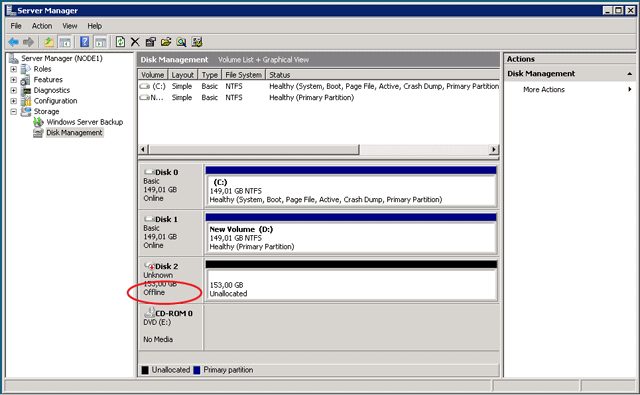 Figure 8. The dedicated disk needs to be offline in the Parent Partition!

In the Hyper-V Manager right-click the Virtual Machine and select Settings. Select the IDE Controller, select Hard Drive and click Add. Under Media select Physical Hard Disk and select the disk you want to assign to this controller. 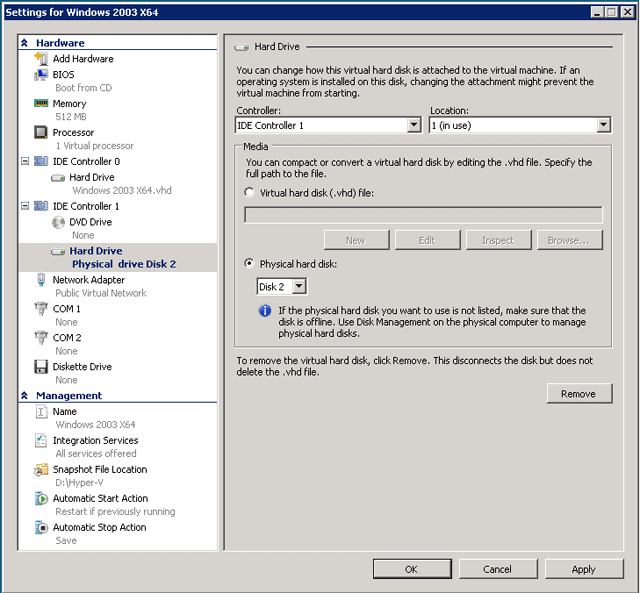 Figure 9. Add the physical disk to the disk controller. Note that this is the same disk as in Figure 8!

When you boot your Virtual Machine and open Disk Management the new disk will show up, ready to be partitioned and formatted.

In this second article I tried to give more information regarding the installation of Hyper-V, Hyper-V’s Virtual Networks, Virtual Hard disks and Virtual Machines running under Hyper-V. In my next article I’ll discuss the deployment of Virtual Machines and the use of System Center Virtual Machine Manager (VMM) 2008 in a Hyper-V environment.