In April 2009 Microsoft released a public beta of Exchange 2010, the latest and greatest version of a part of its unified communications family of products. Recently in August 2009, a feature complete Release Candidate version was released for public download. In this article Neil Hobson takes a look at some of the high availability features of Exchange 2010.

From my experiences, more organizations have deployed CCR in preference to SCC and it comes as no surprise to learn that SCC has been dropped entirely from Exchange 2010.  As you will shortly see, the continuous replication technology lives on in Exchange 2010 but there are many changes in the overall high availability model.

With Exchange 2007 Service Pack 1, a full high availability solution was generally deployed using a total of four servers. Two servers were installed as a single CCR environment, giving high availability for the users’ mailboxes.  The other two servers were deployed as combined Hub Transport and Client Access Servers, and were configured as a load-balanced pair. The reason for this was simply that if the mailbox server role was clustered, it was not possible to implement the additional Exchange 2007 server roles, such as the Hub Transport and Client Access Server role, on the server running the mailbox role. For the larger enterprises, this wasn’t an unreasonable approach but for the smaller organizations a total of four servers sometimes seemed to be overkill for an internal messaging system.  To address this specific issue, Microsoft has designed Exchange 2010 such that all server roles can be fully redundant with as few as two servers, providing you have deployed an external load balancer for incoming Client Access Server connections. In other words, it’s now possible to combine the mailbox server role with other roles such as the Hub Transport and Client Access Server role.  Of course, larger organizations will still be likely to implement dedicated servers running the various server roles but this is something that will definitely help the smaller organizations to reduce costs.  Remember, though, the external load balancer requirement for incoming Client Access Server connections.

With this in mind, let’s get going and look at some of the high availability features of Exchange 2010.  Don’t forget that this is a high-level look at the new features; in later articles here on Simple-Talk, we’ll be diving much more deeply into these features and how they work.  Right now, the idea with this article is to get you to understand the concepts behind these new features and to allow you to do some initial planning on how you might use them in your organization.

Perhaps one of the most important new terms to understand in Exchange 2010 is the Database Availability Group (DAG). The DAG is essentially a collection of as few as one (although two is the minimum to provide a high availability solution) and up to 16 mailbox servers that allow you to achieve high availability in Exchange 2010. DAGs use the continuous replication technology that was first introduced in Exchange 2007 and are effectively a combination of Cluster Continuous Replication (CCR) and Standby Continuous Replication (SCR).  DAGs make use of some of the components of Windows Failover Clustering to achieve high availability but to reduce overall complexity, these cluster elements are installed automatically when a mailbox server is added to a DAG and managed completely by Exchange.  For planning reasons, it’s important to understand that the DAG forms the boundary for replication in Exchange 2010.  This is a key difference over SCR in Exchange 2007, where it was possible to replicate outside of a CCR environment to a standalone server in a remote data center.  However, you should also be aware that DAGs can be split across Active Directory sites if required, meaning that DAGs can therefore offer high availability within a single data center as well as between different data centers.

A DAG can be created via the New-DatabaseAvailabilityGroup cmdlet or via the New Database Availability Group wizard in the Exchange Management Console.  The DAG must be created before any mailbox servers are added to it, meaning that effectively an empty container is created which is represented as an object in Active Directory.  For example, Figure 1 shows a newly created DAG, called DAG1, in Active Directory as viewed using ADSIEdit. 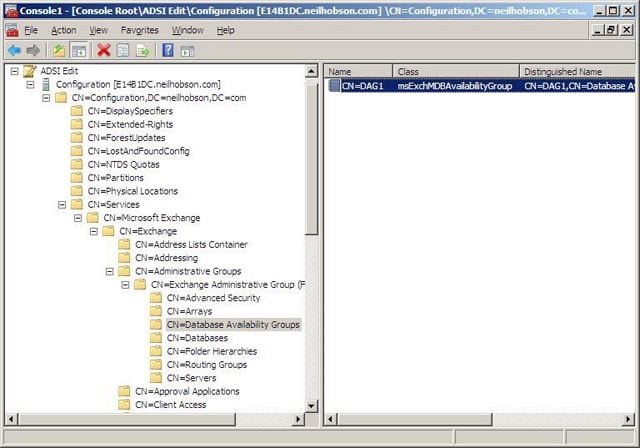 You can see that a DAG has an object class of msExchMDBAvailabilityGroup and that the actual Database Availability Group container location is found under the Exchange 2010 administrative group container.  Bringing up the properties of the DAG object in ADSIEdit reveals the important configuration items such as the file share witness share and directory names as you can see in Figure 2. 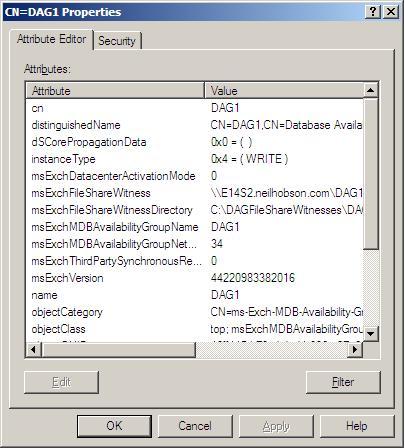 Once a DAG has been created, mailbox servers can be added to it as required.  This is another simple process that can be achieved by right-clicking the DAG object in the Exchange Management Console and choosing the Manage Database Availability Group Membership option from the context menu. The corresponding Exchange Management Shell cmdlet is the Add-DatabaseAvailabilityGroupServer cmdlet.  For example, to add the mailbox server called E14B1S1 to a DAG called DAG1, you’d run the following cmdlet:

Since DAGs make use of several Windows Failover Clustering components, it comes as no surprise to see that the Enterprise Edition of Windows Server 2008 is required on mailbox servers that are added to a DAG, so do ensure that you take this into account when planning your Exchange 2010 implementation.

When creating a DAG, there are options around network encryption and compression that can be set.  This is possible because Exchange 2010 uses TCP sockets for log shipping whereas Exchange 2007 used the Server Message Block (SMB) protocol.  For example, it’s possible to specify that the connections that occur using these TCP sockets are encrypted.  Equally, it’s also possible to decide that these same connections also use network compression.

Inside each DAG there will normally exist one or more mailbox servers, although it is possible to create an empty DAG as discussed earlier within this article. On each mailbox server in the DAG, there will typically exist multiple mailbox databases.  However, one of the key differences between Exchange 2010 mailbox servers and their Exchange 2007 counterparts is that Exchange 2010 mailbox servers can host active and passive copies of different mailbox databases; remember that in Exchange 2007, an entire server in a CCR environment, for example, was considered to be either active or passive.  However, in Exchange 2010, the unit of failover is now the database and not the server, which is a fantastic improvement in terms of failover granularity.  Consider the diagram below in Figure 3. 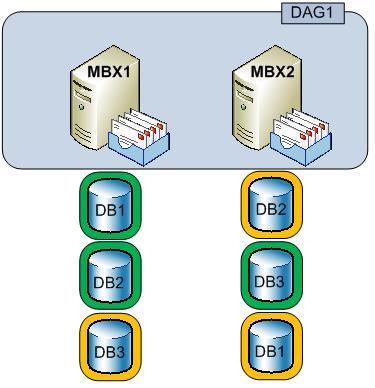 As mentioned earlier in this section, the unit of failover in Exchange 2010 is now the database.  However, if an entire mailbox server fails, all active databases on that server will need to failover to alternative servers within the DAG.

At this point, you might be wondering how Exchange 2010 determines which of the mailbox databases is considered to be the active copy.  To manage this, each mailbox server in a DAG runs a component called the Active Manager.  Specifically, one mailbox server in the DAG will be the Primary Active Manager (PAM) whilst the remaining mailbox servers in the DAG will run a Secondary Active Manager (SAM).  We will discuss the relationship between clients, Client Access Servers and the active copy of the mailbox database in the next section, as there are some significant changes in this area too.  To view the Active Manager information, you can use the Get-DatabaseAvailabilityGroup cmdlet and pipe the results into the format-list cmdlet.  In other words, you will need to run the following cmdlet:

Some of the information returned with the Get-DatabaseAvailabilityGroup cmdlet references real-time status information about the DAG and one of the parameters returned is the ControllingActiveManager parameter.  This parameter will show you which server is currently the PAM.  It’s the job of the PAM to decide which of the passive copies of the mailbox database should become the active copy in the event of an issue with the current active copy.  In an environment consisting of many passive copies of mailbox databases, there will naturally be many choices of suitable mailbox databases available to the PAM.  As might be expected, the PAM is able to determine the best copy of the mailbox database available for use and it does this via many different checks in order to minimize data loss.  Each SAM also has an important part to play, as they inform other services within the Exchange 2010 infrastructure, such as Hub Transport servers, which mailbox databases are currently active.

On each Client Access Server, there exists a new service known as the RPC Client Access Service that effectively replaces the RPC endpoint found on mailbox servers and also the DSProxy component found in legacy versions of Exchange.  The DSProxy component essentially provides the Outlook clients within the organization with an address book service either via a proxy (pre-Outlook 2000) or referral (Outlook 2000 and later) mechanism.  A likely high availability design scenario will therefore see a load-balanced array of Client Access Servers deployed, using technologies such as Windows Network Load Balancing or 3rd party load balancers, which will connect to two or more mailbox servers in a DAG as shown below in Figure 4. 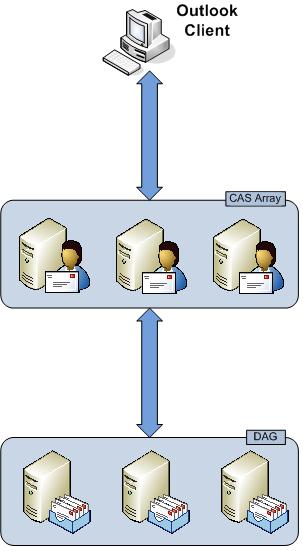 In this article we’ve taken a high-level look at some of the new Exchange 2010 high availability features and how they come together to provide an overall high availability solution.  If you’re planning on looking at Exchange 2010, it makes sense to start understanding these new features and how they can benefit your organization.  Also, there are other interesting features available in Exchange 2010 that further serve to increase the overall high availability and reliability of the messaging environment, such as shadow redundancy in the Hub Transport server role.  In future articles here on Simple-Talk, we’ll be covering these areas in much more detail.

Neil is a UK-based consultant responsible for the design, implementation and support of Microsoft infrastructure systems, most notably Microsoft Exchange systems. He has been in the IT industry since 1987 and has worked with Exchange since 1996. He was an Exchange MVP from 2003 to 2010 and still spends some of his spare time helping others in various Exchange online forums.

View all articles by Neil Hobson