With an Exchange Server, how do you measure performance? How, in particular do you do about measuring your disk subsystem's performance? Whereas the CPU Usage and Memory usage are both easy to measure, the measurement of disk performance is often described as a 'black art'. In fact it isn't so difficult, as Michael Smith explains

It is a real shame, actually. There are three major components that affect a computer’s performance:  the speed and power of its processor, how much memory that it has, and the performance of its disk subsystem. Figuring out those first two – whether you need more memory and/or processing power – is generally pretty easy. For an example, refer to Figure 1. 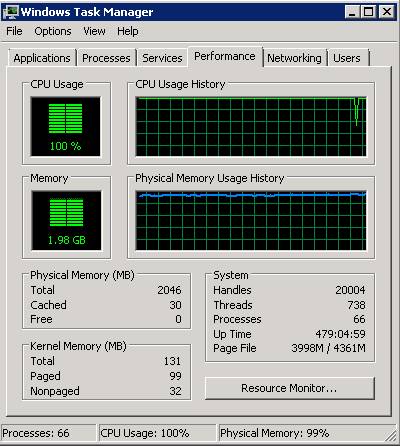 In Figure 1, it’s pretty easy to see that the processor on this computer is overburdened. For the entirety of the CPU Usage History graphical display, the utilization of the processor was almost always 100%. Similarly, when we look at the various memory indicators, it is also pretty plain that the memory on this computer is in short supply. It takes one more indicator to be certain of that, but we can reach that conclusion based on the following indicators:

Now, it is often true that processor utilization and memory utilization can be tightly related. For example, if a computer has so little memory that the operating system is constantly required to move data into and out of the swap file, this tends to keep the processor utilization higher than it would be otherwise. However, since disk is so much slower than memory, it’s rare that such a situation can cause a processor to be 100% utilized.

Also, you should note that physical memory being 99% utilized is not, by itself, an indication of memory depletion. In the general case, Windows will try to cache system files and system data into memory, if memory is available to do so. This allows Windows to access those items much more quickly, since memory is so much faster than disk.

If Figure 2, you can see another picture of that same computer, just a short while later. 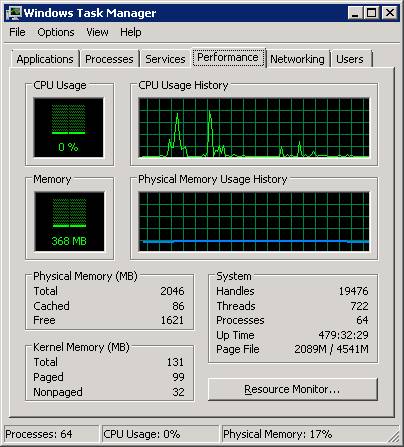 In Figure 2, you see a processor that is fairly idle with no memory pressure. The total physical memory has not changed, but in this second performance snapshot, the amount of free memory is up to 1,621 MB and the page file is only 46% in use.

Based on what we see in Task Manager, this computer should be performing very well, shouldn’t it?

The easiest way I’ve learned to explain them is below. Stay with me through the entire four parts of the explanation to find your “Ah-hah!” moment…

If you put all of these together, this means that in the case where a physical disk contains only a single Windows volume, LogicalDisk and PhysicalDisk measure the same thing.

Somewhat confusingly, disk aggregators (this includes RAID controllers, Storage Area Networks, Network Attached Storage, iSCSI, etc.) may present many physical disks as a single logical device to Windows. However, each of these devices (known as a logical unit number or LUN) may again actually represent multiple logical or physical disks. Thankfully, from a Windows performance perspective, those distinctions can be ignored, at least until a specific LUN is identified as having a performance issue. In that case, in order to acquire more specific data, you will have to use performance tools from the aggregator’s provider as the disk aggregators can sometimes provide unpredictable results.

Is there a conclusion here? Yes, there is. The conclusion is that in the most common cases, the performance of a LogicalDisk object is in what you are most interested.

Note: Lots of SAN and NAS software provides a feature called “LUN stacking” or “disk stacking” which allows multiple LUNS to exist on a single physical disk. This just complicates your life. Avoid it. J Just always remember that you have to be able to identify what you are measuring and the boundaries on that measurement. If you have multiple applications accessing a single physical disk, then your performance will always be non-deterministic and difficult to predict.

What do I measure?

Now that you know which performance object is interesting, what do you do with it?

As you probably know, any performance object is composed of a number of individual performance counters. A counter contains a discrete value which may be any of:

For the LogicalDisk performance object, there are 23 counters:

Speaking as a person who likes math, I think that all of these counters are interesting, and are worthwhile tracking over time.  For example, if the % Free Space is decreasing on a regular basis, then you may need to plan to add more disks – or stop the expansion in some way. If your Disk Write/sec is trending upward, you may need to investigate why more write operations are occurring to that disk drive.

For determining whether you have adequate performance, I would suggest that there are four main counters that you need to constantly monitor. Note that in this case, I’m suggesting that the counters should be checked every one to five minutes. Those counters are:

For [4], it should be obvious that if any write operations are occurring to a disk, if it fills up, performance will rapidly approach zero, the event log will starting filling with errors, and users will be calling your phone saying “Exchange is down” (or name your favorite application instead of Exchange). On the other hand, if a disk is read-only, such as a DVD-ROM database, there is no need to measure either [3] or [4]. Writes cannot occur. But that is a special case, and since we are primarily concerned with Exchange, it doesn’t support any type of read-only volume.

You may find it interesting that I use the average values instead of the current values. That is because any system can be instantaneously overwhelmed. At any given moment of time, you may have 50 I/O’s queued to a particular disk waiting to be satisfied; but that is unlikely to be the normal case. If that high queue value becomes the normal case, then the average values will trend quite high as well. That will server to provide you with an absolute indication of an issue which needs to be addressed.

If the average values are not high, then you had what is called a “usage spike” in which a device was temporarily overwhelmed. And that is why we have queues anyway

What is a “high value”? A high value occurs when the device cannot empty the queue. Because each I/O is variable in size, its arrival cannot be predicted, and the I/O takes a variable amount of time to complete; the point at which a device is considered saturated or overburdened with I/O requests actually occurs a little earlier than you may presume.

Now, I am not a statistician, nor do I play one on TV. However, like many of you, I took basic queuing theory in college. A device becomes saturated when its I/O queue exceeds 70% on an average basis. To put that another way: if the average disk queue length of a device exceeds 0.70 then the performance of that disk is negatively impacting user performance.

So now you know: the best way to check your Exchange disk performance is to:

The next thing you may want to know is – how can I predict how my disk subsystem should perform? But that is a topic for another article.

View all articles by Michael B. Smith