Of course, changing a 32,000 mailbox system, based in 40 Exchange Servers, to a centralised 25,000 mailbox solution is not a difficult task as long as you follow the Microsoft guidelines; It just takes patience, and time to understand Exchange's storage design principles. Jaap describes the design process and shares his experiences with the chosen server hardware.

Before designing anything for Exchange Server 2007 the existing environment needs to be investigated. The following figures were found, Type I, II and III are the type of users (or usage scenario):

All users were using Outlook 2003. Desktop were running in online mode due to the roaming profile, laptops were running in cached mode. Outlook Web Access is used by only a small number of users and so is POP3. There were approximately 3,000 Blackberry device and approximately 1,000 Windows Mobile devices.

At the beginning of the project approximately 27,000 mailboxes could be separated into three categories:

Table 2. Mailbox limits and the number of mailboxes

The customer wanted to maintain the mailbox limits in the Exchange Server 2007 environment.

As it turned out the mailbox types did follow the mailbox profiles we found earlier, in general a large mailbox had a higher IO profile compared to a mailbox which was of a smaller type.

Using the storage calculator and the mailbox profiles and sizes the following numbers were found for sizing the Exchange Server 2007 mailbox servers:

So now we know the total number of Exchange Mailbox servers: 9. The number of Hub Transport Servers and Client Access Servers can be derived from this number, or better, from the number of processors in the servers. For this customer no hard numbers were used though. The customer wanted to deploy Exchange Server 2007 into two separate rooms (in one building), so in each room 2 Hub Transport Servers and 3 Client Access Servers were used.

A Unix based anti-virus and anti-spam solution was already available so an Edge Transport Server is not used.

The customer was using a Standard Building Block (SBB) for their entire IT infrastructure. This SBB is based on a Dell PowerEdge 2950 with a dual Quad Core Intel Xenon processor, 2 local disks in a RAID-1 configuration, 16 GB internal memory and two Intel dual port network adapters. These servers are used for all Exchange Server 2007 servers. All servers are running Windows Server 2003 X64, Standard Edition or Enterprise Edition.

The storage being used for the Mailbox Servers is an iSCSI solution from Equallogic. The Equallogic PS-series should scale well and are very flexible, even in an enterprise environment like this. Well, so did the sales men tell us 😉

Before this deployment I’ve seen Equallogic PS-series storage in several scenarios, but never beyond three or four units. This is quite a different environment where one would expect a fiber channel storage solution from EMC or HP, but not an Equallogic iSCSI solution.

Because EqualLogic virtualizes storage and handles volumes differently that mainstream storage the exchange storage calculator has to be used differently. The important values are the IOPS which are needed and because the storage calculator still uses disk spindels to calculate requirements the values differ. Diskspindels do not matter (or at least less) in an EqualLogic design as all data is spread over 14 disks per member in the pool anyway. Also the controller logic within the Equallogic and the cache memory used in an Equallogic mean you have to interpret the numbers differently.

This is how we designed the storage solution:

Because EqualLogic virtualizes storage a volume is spread over multiple arrays in a pool to a maximum of three possibly utilizing 42 disks giving maximum performance and IOPS. 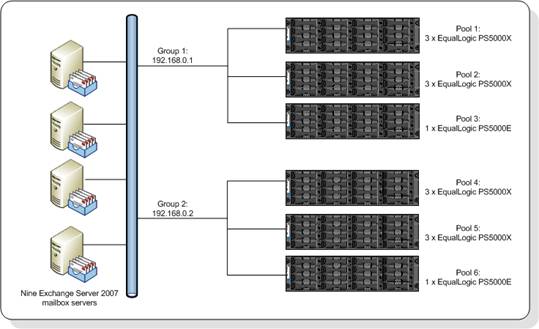 Figure 1. Schematical overview of the mailbox servers and the storage solution

All units are configured in a RAID-50 scenario, this will give the best performance on these particular devices. In total a net capacity of approximately 50 TB of storage is created this way and this should be sufficient to host the 25,000 mailboxes and provide enough for future growth.

A classic Windows limitation when using a large number of LUNs on a server is the drive letter limitation. There are only 26 characters in the alphabet, and 5 are already in use on the server, so only 21 are left. When configuring 20 Storage Groups 40 LUNs are used, so Volume Mount Points are configured on each mailbox server, resulting in only two drive letters being used. One for the databases and one for the LOG volumes.

When configuring an environment like this you really have to know how to script. Scripts were used to configure all the LUNs on the Equallogic environment, scripts were used to create all the partitions (be aware of the disk alignment!) and format the drivers. Best practice is a 64Kb disk offset which is not default in windows.

Finally a PowerShell (Exchange Management Shell) script was used to create and mount all the databases on the Exchange Server 2007 mailbox servers.

The performance of the Equallogic PS-series really surprised me, they were performing better than I initially expected. During testing we manged to get 35.000 IOPS from the storage which was a lot more than we needed. After migration 25,000 mailboxes to the new platform all nine mailbox servers are still running fine with a pretty low number of disk I/O’s and a fairly low processor utilization.

Are there challenges? Oh yes, think about the Online Maintenance. When using such an amount of databases and this sizing OLM really has a hard time to finish in time, so only two databases are configured each night to run the OLM. Each database is running OLM once every week; otherwise it cannot finish its run.

Reseeding a database is nothing else than a file copy over the network from the active node in the CCR cluster to the passive node. Copying a 150 GB or 200 GB mailbox database can take some time; imagine you have to reseed five databases.

You also need a good performing backup solution to have the backup finish within the available timeframes. Also monitoring becomes more important when dealing with these amounts of databases.

Designing a 25,000 mailbox solution is not a difficult task as long as you follow the Microsoft guidelines; use the Exchange Storage Calculator for designing a proper storage solution and understand exchange storage design principles. Failing to do so will always result in a poor performing Exchange server environment.

Using a storage solution from Dell/Equallogic is also possible, but special care has to be taken to design and implement the members the correct way, using the right number of portals, pools and members. If you do so, it will perform well. Please note that in this scenario the Equallogic solution was only used for storing the Exchange Server mailbox databases and logs. No other data, such as like SQL databases, is stored on the EqualLogic arrays.

Disclaimer: This article is a true scenario, but the entire project from the Exchange Server 2003 inventory up to decommissioning the Exchange Server 2003 servers took more than a year with three people, working full time on all aspects. The documentation that was created during the project covers more than 300 pages, so it is not possible to cover everything in great detail. My main objective was to explain a bit more about using the Equallogic hardware in combination with a 25,000 mailbox environment.