This article explains about how the data modifications is handled by Cassandra, to handle Update’s and Delete is effectively we need to first understand the Write Path and the Read Path in Cassandra.

When a write request (insert) is received is by Cassandra, the data will be stored in Memtable & Commit Log simultaneously. Imagine Memtable as data cache, once the Memcache is full, data is flushed out (written) to the SSTable. Below diagram showcases how writes are handled by Cassandra.

Memtable – Memtable is an in-memory cache (RAM), it is like Hash Table data structure where contents are stored as key-value pairs. When a Memtable exceeds the configured size, a flush is triggered which moves data from Memtable to SSTable. If we need to change the default Memtable configuration size, we need to modify the field ‘memtable_total_space_in_mb’ in Cassandra.yaml file

To change the default Commit Log configuration, we need to modify the ‘commitlog_total_space_in_mb’ field in Cassandra.yaml file.

We can manually flush the data from Memcache to SSTable using ‘nodetool’ command.

SSTable (Sorted Strings Table) – SSTable a flat file of Key-Value pairs which is sorted by keys and it is used by Cassandra to persist the data on the disk, SSTable files are immutable, each SSTable contains a sequence of blocks where by default each block is of 64 KB size and it can be configured.

On the disk, SSTable can be found under data folder with the name ‘/data/data/keyspace/table/*-Data’.db

Compaction: The processing of merging of various SSTables to fewer SSTables is known as Compaction. Compaction is essential process in Cassandra because every operation except ‘select’ is a write in Cassandra and every write happens with a new Timestamp for every Insert, Update and Delete. More details about compaction is provided later in the article.

How Data is Stored:

To understand how Cassandra stores the data, consider a table where column ‘Name’ is the Partitioning Key.

In Cassandra, data may be stored in various locations like Commit Log, ‘n’ number of SSTables. But Commit Log is used to recreate the Memtable in case of any node crashes, that’s why in the read path it’s not important to go in details of Commit Log.

Consider below table which represents the read operations performed against a table named ‘User’, where Partitioning Key is the ‘user_id’ and Timestamp is the time when the data is written to the Cassandra, the Data Location column represents where the data is currently located in Cassandra.

In the table we can see that Sequence 1 and 4 has the same info but timestamp is different, similarly in the Sequence 2,3 and 5 also has the same details except the timestamp. In this case, Cassandra compares the Timestamp of the records which has same details and the one with the latest timestamp is returned. Because, Cassandra uses Timestamp to resolve conflicts between the data which is stored in Memtable or SSTable.

On execution of the below queries, the data with the latest timestamp in the table will be returned and other records will be ignored after Timestamp comparison.

There is a possibility that Memtable contains the multiple entry of same the record, in this case also the record with the latest timestamp is returned.

Similarly, if the data is flushed from Memtable to SSTable, say a record is scattered across SSTables then also the timestamp is compared and the record with latest timestamp is returned.

When Cassandra receives an Update request, it never validates first whether data exists or not to update the data like it happens in SQL world. Instead, Cassandra creates a new record every time when an Update command is received by Cassandra, in a nutshell Update request is an Upsert operation in Cassandra.

Please keep in mind that, In Cassandra except ‘select’ every operation is a write including Deletes.

Scenario1: Let’s execute update query on the user table and create a new record which never exists in the system.

Note: ‘select * from user’ query is not very efficient, whenever the data is retrieved from Cassandra, Partitioning key is always expected in the where clause. If Partitioning key is not given, then most of the time query will be Timed out, because Cassandra needs to coordinate with every node to return the data and the default time out in Cassandra is 10 seconds. I have used that query as an example because I have a limited data.

Scenario 2: On modifying an existing user, let’s check whether a new record is created or the existing one is updated.

In the read-path section we have seen that Cassandra uses Timestamp to resolve the conflict, since user table already had an entry for user_id=10, on receiving the update query request, Cassandra must have created another record for the same user_id. To verify that, let’s flush the records from the Memtable and verify the SSTable, to do that execute nodetool command which is

After executing the nodetool command, with the help of ‘sstable2json’ or ‘sstabledump’ (windows equivalent) command, SSTable records are returned to us as a JSON. On my system, there are 2 SSTable files are created, first one with the name ‘mc-1-big-Data’ contains json record captured in a Screenshot. 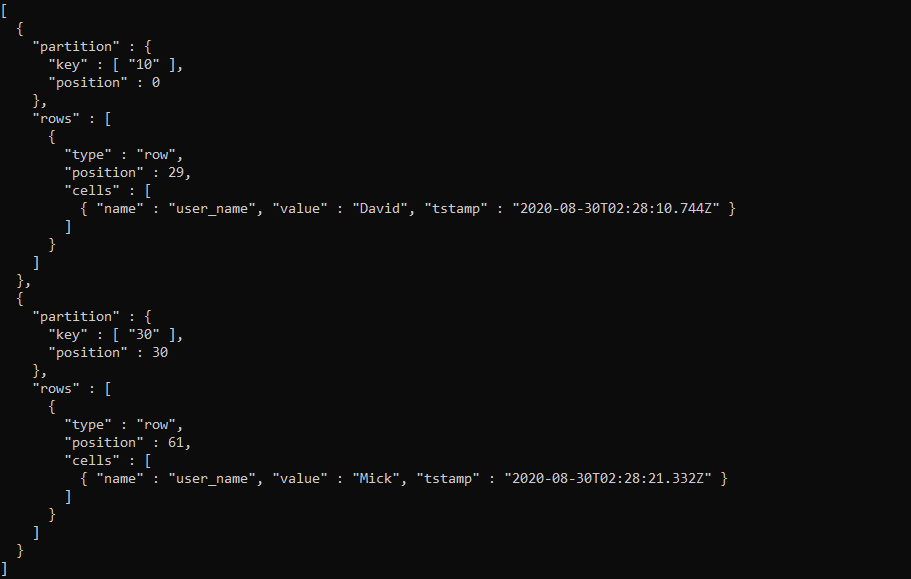 and the second with the name ‘mc-2-big-Data’ contains the record, which was created using update query. The second file is created after I manually flushed the data from the Memtable to SSTable

When Cassandra receives a delete request, it creates a tombstone, tombstone means it marks the record for deletion. Tombstone is just another JSON field which is a timestamp.

Let’s delete a record from the system

delete from user where user_id=30;

On flushing the data from Memtable to SSTable and check the JSON record,

‘deletion_info’ key is a Tombstone.

Cassandra doesn’t delete the record immediately because if the deletion happens immediately and a replica node is down, once the node is back-up there is a possibility that it replicates the data to the nodes that had previously deleted it, because this node is unaware of the delete. Usually there are lots of nodes in the cluster (100s) and it is a usual scenario. The below diagram indicates that it is a 6 nodes cluster and the node 4th is down. Once the 4th node is up it may replicate the data to other nodes. 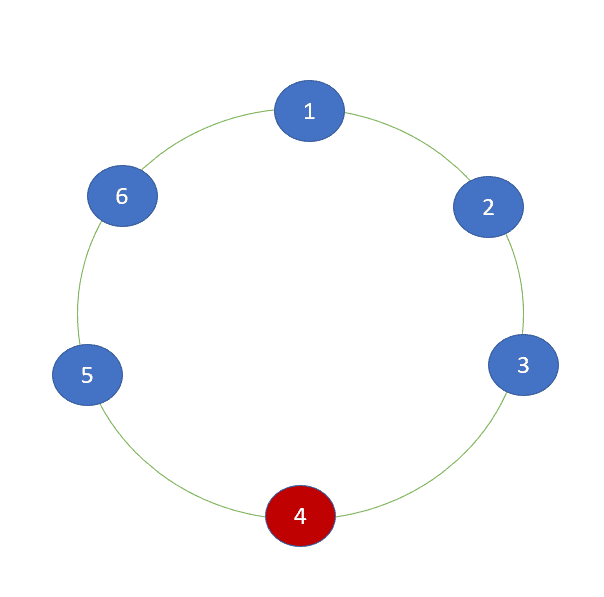 Compaction brings two benefits, first the read query performance will be improved as now Cassandra needs to read only fewer SSTables, second benefit is the disk space is reclaimed.

Time To Live (TTL) is a way of setting an expiration date in seconds for the data which is being written. TTL records are also marked like Tombstones and the flow is same as Delete, that once the ‘gc_grace_seconds’ is passed and after compaction data is deleted from the system.

Let’s understand by an example

On executing the select query, following rows will be returned.

After flushing the data from Memtable to SSTable, we can see that in the JSON file, the newly created record with a ‘ttl’ key set to 30 which means that data is set for expiration after 30 seconds.

On executing select query after 30 seconds, Cassandra removes the record

But the data from the disk will be remove only after ‘gc_grace_seconds’ is passed, and compaction is completed.

TTL of a record can be updated using Update query, let’s insert a record

Records in the table

Records in the table

The above query will set only user_name field as ‘null’ & in Cassandra if any column has ‘null’ values that record is marked with Tombstone.

Record can be set for expiration even with Insert query, if we want to remove the entire row using TTL approach

It becomes extremely important to understand the Read Path, Write Path, Update and Delete basics specially if we are using Cassandra as the backend for any web application, better understanding of these basics helps us in designing better data models.

Sameer Shukla is a technology enthusiast. He started his career in India and worked for various MNCs before moving to the US, where he is currently working as a Principal software engineer for a global transport and logistics company. Sameer's current expertise/interests are Functional Programming, Data Quality, Data Governance, Enterprise Information Management, analytics, cloud computing, microservices, NoSQL (Cassandra), SQL, and Big Data.

View all articles by Sameer Shukla