Redgate software first ran their SQL in the City event in 2011 in London and I was highly honoured to be asked to speak at the event, it was a success and so was the following event in Los Angeles. Sadly I wasn’t invited to speak at that one! So a year passes and when SQL in the City 2012 is announced there is a London date and 5 (yes, five) US events on the schedule. 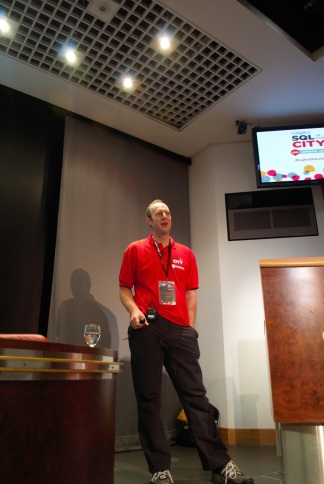 The London event was such a popular announcement that it was over-subscribed in minutes and led to a second date being added, instead of being just the Friday the event got amended so that it was repeated on the Saturday too, purely to cope with demand. This year the event has 3 tracks (DBA, Dev and RedGate Tools) instead of the 2 (DBA and Dev) in 2011. So let’s see how this event has grown – 2011 had 2 days of training with 2 tracks giving 4 days of content, 2012 has 7 days of training with 3 tracks giving a huge 21 days of training. That is a massive growth in contribution to the SQL Community from Redgate.

All events seem to have some sort of keynote session to start them off. I can honestly say that the 10 minutes that Simon Galbraith spent on the stage were splendid; to the point, amusing, entertaining and thought provoking. Well done sir.

I didn’t, indeed couldn’t attend all the sessions despite being there for both days. 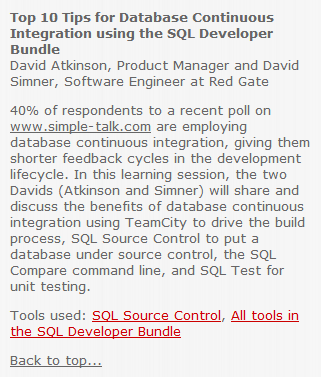 I saw an inspiring session on Top 10 tips on Continuous Integration from David Atkinson and David Simner. Bringing your databases under the same source control as your application code has so many advantages that the small step in effort to achieve it will pay dividends from day 1. Faster releases, fewer bugs, it’s all good. 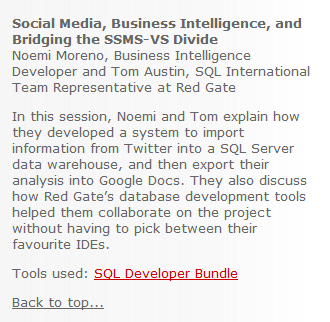 I followed this with a session on Social Media, Business Intelligence and bridging the SSMS-VS divide from Noemi Moreno and Tom Austin. Noemi had a big dose of the demo-gremlins on the Friday but this didn’t stop the session clearly demonstrating how easy it is becoming to work in SSMS or Visual Studio to achieve the same tasks and in a collaborative way. Getting Twitter content into a BI solution is a brilliant demonstration of how modern business can instantly measure public response to it’s marketing efforts. I understand from someone who attended the Saturday version of this session that the hours of work Noemi dedicated to resolving the issues paid off and it went without a hitch second time around. 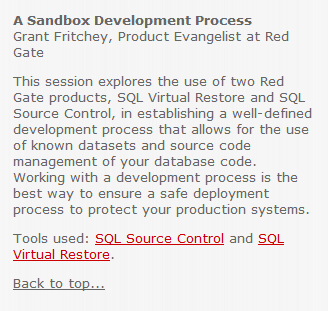 After lunch my session choice took me to see Grant Fritchey talk about Sandbox development process and I started to fear I was a bad influence on session as he too suffered with demo-gremlins. Once again though, the speakers experience, confidence and enthusiasm took the room past the problems and still delivered useful and entertaining content. I got the idea that lots of the audience were taking note and aiming to go back to the office and implement some of this session right away. 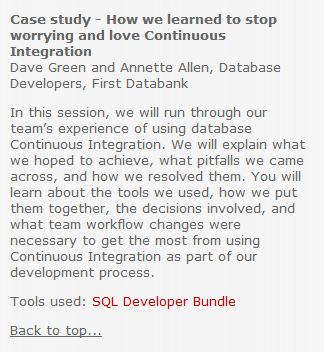 I was particularly interested in the next session Case study – How we learned to stop worrying and love Continuous Integration as the presenters Annette Allen and Dave Green are both members of my SQL User Group (SQL South West, and I’m married to one of them. Annette, if you weren’t sure!). They were introducing how they started working in a CI process on a new project, how it benefited them and what pitfalls they encountered along the way. Judging by the questions that people had following the session then there were lots of people inspired to source control their databases in this way. 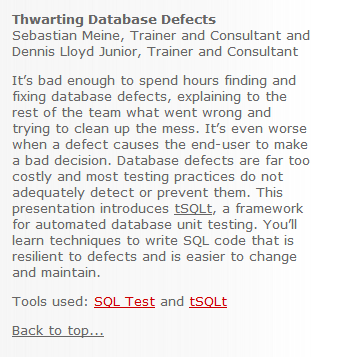 The final Friday session for me was Thwarting Database Defects from Sebastian Meine and Dennis Lloyd Junior. These guys are full-on Rocket Surgeons when it comes to thinking about TSQL and their TSQLT database unit-testing framework is genius on a stick. If you want to write bullet-proof TSQL then you need to attend this session and then explore their work.

Free beer and prizes filled the last half-hour of the day.

As I was uniquely linked to one of the presenters I was able to attend the Saturday event too so luckily got a 2nd bite at the SQL in the City cherry.

I skipped the keynote and spent some time with the Redgate staff preparing the demonstration pods and helped out a little at the registration desk, the Saturday, despite being a day that people would normally forget about work and all things connected to it was attended by over 250 people. It was pleasant to have a little more room in the venue and it seemed somehow easier to chat and get time to talk between sessions despite the session times being exactly the same as the previous day. 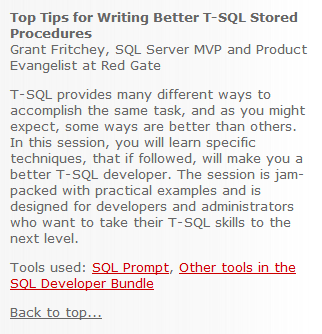 First session of the day was from Grant Fritchey and I must admit I didn’t attend it. I had the pleasure of being at the SQL Cambs user group earlier in the week where Grant did a dry run of the session so seeing it again so soon seemed a little pointless. The session is great and if you get the chance then I’d recommend it for sure. The legend that is ddltbl will be explained. 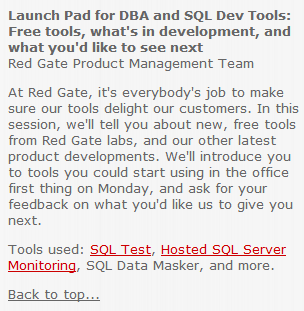 I took the opportunity to hear from some of the Redgate Product Managers for the next session. Hearing their enthusiastic approach to solving problems for SQL Server professionals was great to witness, they clearly enjoy making other peoples work easier to manage. If you want the inside track on what Redgate are working on (including hints at things they are attempting to achieve) and having the chance to give them your thoughts on them then this will be a must for you.

Lunch break was the same as Friday. Don’t read this as a bad thing. The food ‘sessions’ were as good as the technology sessions, having a 2nd time allowed me to try some of the other dishes! All excellent. 🙂 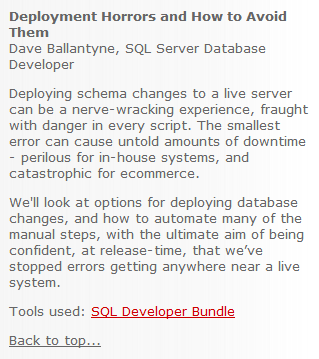 The difficult first-session-after-lunch was with Dave Ballantyne – Deployment Horrors and How to Avoid Them was a technical session based on Dave’s considerable experience working with enterprise deployments and how to automate them. If you have ever had one of these go wrong or are worried that you have been trying your luck so far then the ideas and suggestions in this hour will be invaluable.

I took an extended break in the next session as I got talking to one of the Redgate guys and we were deep in discussion when I noticed that the exhibition hall was empty. All the sessions had started 15 minutes earlier! I kept talking to the team and gave them some feedback on the tools that were being demonstrated and what I’d like to see added to them. Hopefully some of this will chime with comments from other attendees and the next versions of the tools will incorporate them. Redgate were very open, saying that our feedback to them was as important as any other reason for SQL in the City taking place. 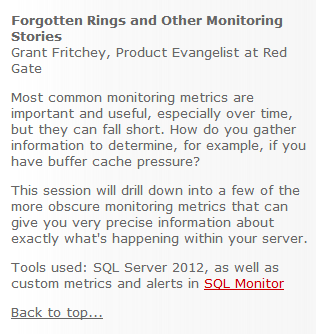 This left me with the final session of the conference to be spent with Grant Fritchey again. The title had me guessing right up until the session started – Forgotten Rings and Other Monitoring Stories. Grant took the session to explore all the monitoring points that are important and reduced them to a single number. Each metric having a value means you can do some funky stuff with Redgate tools and track how the value changes over time and then see how your systems are performing. Whether you use the tools or not, knowing about these metrics and monitoring them means you are better able to diagnose causes of slow downs and then prevent them from taking your systems off line. He also mentioned a competition coming up that I’ll write a separate blog about.

So in summary, an epic day of free training and a great day to meet friends and discuss SQL Server with a premier SQL Tools provider. If you go you wont regret it.