Phil Factor shares a SQL Prompt snippet called timings, which he uses as a standard testbed for getting execution times for procedures and functions.

A SQL Prompt snippet is a pre-defined block of code, which we can insert at the current cursor position, or around currently-selected SQL text, in an SSMS query pane. DBAs use them to store all their most commonly-used checks and routines. It’s often useful to have your favorite troubleshooting scripts available to you within a few keystrokes, especially when firefighting an urgent issue, with people staring over your shoulder.

A developer like me uses them to try to aim for a better quality of code in the same amount of time. In this quick tip, I share the SQL Prompt snippet I use as a standard testbed for getting execution times for procedures and functions.

During development work, I might have two functions that perform the same task in different ways, and want to compare their performance. I need timings under different workloads so I can ensure the functions work at scale. I need to record all timings, so if I change a function, I can see if there is an improvement or regression.

For example, Listing 1 calls two functions that shred a JSON document into a SQL hierarchy table, JSONHierachy and ParseJSON, and then two, JSONVersion and ToJSON, which create JSON documents from a hierarchy table. I’m not going to show the full routines here because it’s a lot of code, and all these routines are published on Simple-Talk, in my series about JSON and SQL Server.

I want to compare the performance of each of these functions, and I want to store the results in a table so I can query them easily. How do I do it?

However, it still isn’t easy to associate the time with the part of the batch that was executed; I’d need to cut and paste the results. Also, there is a suspicion that the SET STATSTICS TIME ON could even affect the timings. I want more precision, and I want to save timings to a table.

Listing 2 shows my timings snippet, which I can use and adapt to get the timings for specific parts of any routine.

In an SSMS query window, highlight the code in Listing 2 and, from the right-click context menu, select Create Snippet. Give it a name (I called mine timings) and a description and save it.

Next, select the original routine calls in Listing 1 and evoke the snippet from the Action list.

SQL Prompt will inject the selected code into the timings snippet, as shown in Figure 2. I’ve filled in the value for the $routine$ placeholder. 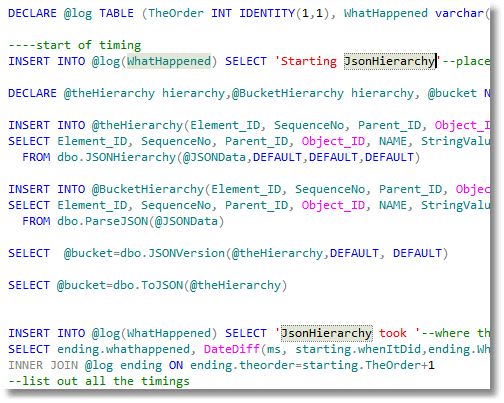 From there, with a quick bit of cut-and-paste, I extend it to record separate timings for each of the sections I want to measure (see the where <routine> ends comments in the code).

Figure 2 shows the results, with timing in milliseconds for each step in the batch.

Hmm, nearly half a second for JSONversion! I don’t like the look of that; clearly, this routine needs a bit more development work!

I can, of course, save the timings into a more permanent log, as part of testing. Often, I will run the sequence of tests with different sizes of data, a longer or shorted JSON document in this case, so it is useful to be able to compare with previous results. I often export the results and plot them in Excel or GnuPlot.