SQL Compare has project options that allow you to ignore certain objects, or certain differences between objects, as well as deal with more complicated object differences, such as different column orders in a table in the source.

A database comparison tool like SQL Compare removes a lot of the pain behind the task of comparing SQL Server database schemas, generating a synchronization script, and then deploying the changes from the source to the target database.

However, depending on how you have SQL Compare configured, there may still be some manual work to be done, once you’ve generated the synchronization script.

For example, if the collation settings on the source and target databases are different, SQL Compare will detect that each text column in the source is different from its counterpart in the target. If you’ve got to pick through all of these results to find the meaningful differences, that’s going to waste precious time.

SQL Compare can deal with a lot of the hard work automatically. It has project options that allow you to ignore certain objects or certain differences between objects as well as deal quickly with more complicated object differences, such as different column orders in a table in the source.

If you tend to amend deployment scripts by hand before executing, or passing over for sign-off, you risk missing meaningful changes amongst ‘noise’ and introducing errors.

When comparing databases, SQL Compare offers a number of configurable options, in order to reduce ‘noise’ in your comparison results, and help you diagnose differences more quickly. They allow us to control certain behaviors, such as how to deal with tables where the column order is different in source and target, as well as to ignore certain objects in the comparison.

You can find the project options in the startup New Project dialog, under the Options menu (or you can get to these options from the comparison results by clicking Edit project). 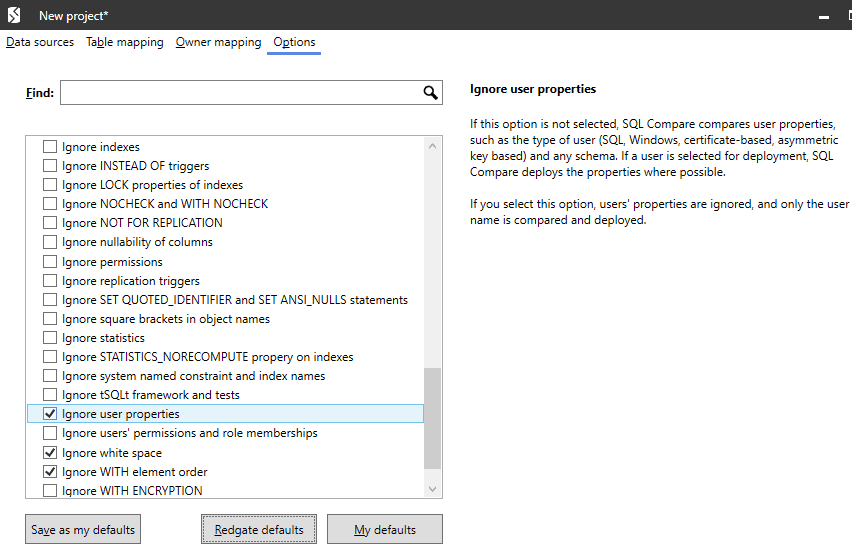 Hover over any of the options and SQL Compare will give you more detail on exactly how the option will behave if you select it.

A number of these options, eight of them in SQL Compare 12.1.3, are enabled by default. For example, by default SQL Compare will ignore white space, database user properties, database and server names in synonyms, and so on.

Beyond the defaults, there are many other project options for you to pick and choose. In this article, I’m just going to focus on some of the most commonly-used options that will help reduce noise in your synchronization scripts.

Sometimes, you simply want to ignore certain types of object altogether, when performing the schema comparison.

Ignore indexes, constraints, and so on

SQL Compare offers several options for ignoring objects such as indexes and constraints. For example, a common requirement is to load transactional OLTP data from a Customer table (say) to the Staging environment, transform it, then merge that data into the table in a data mart.

In such cases, it might not be appropriate to deploy indexes to the Staging environment, and so we can use SQL Compare’s Ignore Indexes option.

In the following example, I’ve created ‘identical’ Customers databases on two SQL Server instances, and then compared them. Figure 2 shows the side-by-side comparison of the definitions of the Persons table on the source and target databases. As you can see, for each of the text columns, SQL Compare has detected differences in the collation setting.

To ignore these collation differences in the comparison, click Edit Project, click on the Options menu, and check the Ignore collations checkbox, then hit Compare now.

Now SQL Compare detects no differences in the collations, but we are still seeing a difference in naming of one of the constraints. Let’s deal with that next.

Our database designer in this case has chosen to allow auto-naming of constraints, so they get a system-generated name. Again, we can choose to ignore the names of system names indexes, statistics, foreign keys, primary keys, and default, unique, and check constraints when comparing and deploying databases, simply by checking the Ignore system named constraints and index names box.

Notice, in Figure 4, how use of the search box allows us to narrow in on the option we need very quickly.

Handling security issues during database deployments can be painful. Some teams choose to handle all security objects (logins, users, roles, permissions) entirely separately from the code objects and tables, for example defining configuration files that define the correct security configuration for each environment.

Some teams allow SQL Compare to include database users and roles in the comparisons, but prefer to set up all permissions as a separate manual step on the target server, ensuring for example the use of entirely role-based security.

There are a couple of project options to help deal with differences in permissions between databases, as shown in Figure 5. 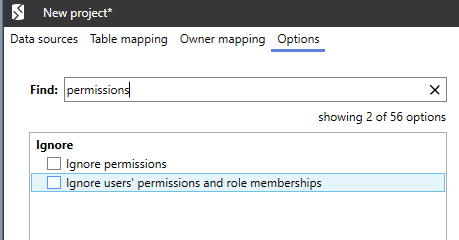 To demonstrate how each of these options work, I created on the source Customers database only, the following security scheme:

Figure 6 shows the results of the database comparison (with neither option in Figure 5 enabled), with the differences for the Customer schema highlighted.

Figure 7 shows the comparison for the Sensitive_low database role.

In our example, with this option enabled, the database user TonyTest will be deployed to the target, but without any direct permissions or role membership, as shown in Figure 8.

We can reduce ‘noise’ in our comparison results by ignoring comments when comparing views, stored procedures, and so on. Be aware though that comments will not be ignored when the objects are deployed.

Say you’re comparing source control to a target database and have tSQLt frameworks and tests in the source environment but not the target. You don’t want to deploy these, so quickly jump back into the Options and simply check the appropriate box.

Control other behaviors during comparisons

Finally, let’s briefly review how to avoid a few behaviors that could cause deployment, or post-deployment problems.

One step beyond that, SQL Compare can sometimes auto-map columns with compatible data types and similar names. Of course, you’ll see a warning to make you aware that automatic mapping has taken place, so you know exactly what is being compared.

To demonstrate this, I simply renamed the Note column in the Customer.Note table, in the source database, to Note2.

In this particular example, the collation settings on the target and source columns don’t match, as discussed previously, and this is a case where SQL Compare will not attempt to do auto-mapping. The deployment script it generates would simply drop the existing Note column on the target database, and create a new one called Note2, with a warning that a migration script will be required to avoid possible data loss.

Note that SQL Compare warns us that auto-map has been used, and this new option, Auto-map similar columns, can be turned off if you’d rather SQL Compare didn’t make these assumptions for you.

If additional columns are inserted into the middle of a table, this option forces a rebuild of the table so the column order is correct following deployment. Data will be preserved.

For example, I used SSMS to add a new column (ShortNote) into the middle of the Customer.Note table, on the source database.

If you save such a change (you may need to navigate Tools | Options | Designers and temporarily disable the Prevent saving changes that require table recreation option), and then re-run the schema comparison you’ll see that SQL Compare will detect the new column and in the deployment script, simply add it to the end of the table.

However, if you have code objects that rely on the exact order of the columns (a bad idea), then you can enable the Force Column Order option. Having done so, SQL Compare will generate a deployment script that will rebuild the table while preserving data. It will recommend you re-deploy all dependent objects, in this case the Customer.NotePerson table.

Then, it will present a warning that the Customer.Note table will be rebuilt.

Save your own default settings

SQL Compare also allows you to create your own default options. I’d recommend you run the comparison with the default options first, review your comparison results, and then consider changing some of the options to remove ‘noise’ from the results and help you identify meaningful differences more quickly.

For example, perhaps you want to ignore a variety of different objects when you’re running a quick comparison to check on the state of differences between dev and production. Simply make your selections and select Save as my defaults.

It’s likely you’ll want to change your options for different circumstances, say if you’re doing a quick comparison between environments, as I described, or if you want to generate a deployment or run a deployment with SQL Compare. You can always reset the default by selecting Redgate defaults.

Identify what works for you, then save your own default settings to save you some time and effort next time round.

Make sure you’re on the latest version of SQL Compare by running Check for updates from the Help menu. If you’re new to SQL Compare, get your free 14-day trial today and give it a go for yourself.