Chuck Moore: Geek of the Week

Charles Moore is one of the greatest ever programmers. The 'Forth' language he invented is still in use today, particularly by NASA, and has never been bettered for instrumentation and process control. He still argues persuasively that the only way we can develop effective software quickly is to embrace simplicity. Like Niklaus Wirth, he remains a radical whose views have become increasingly relevant to current software development

A descendant of the language that Charles Moore developed was, at one time, the most widely implemented of all computer languages; it was not so much the language of commercial applications but of process control, instrumentation, and of computer peripherals. Forth was extraordinarily advanced for its time, and is still being developed. It spawned other languages such as STOIC and PostScript, and proved so versatile that even a commercial spreadsheet was written in it. In a sense, if you use a PostScript printer, or send .psf or .eps files, you’re using a software technology that Charles Moore first developed.

“I despair. Technology, and
our very civilization, will get
more and more complex until
it collapses. There is no
opposing pressure to limit
this growth.”

It may sound hard to believe but four decades ago, when computing was almost exclusively the province of a handful of scientists, giant corporations, and the military,  it was the Governments that were the chief funders of personal computing research. They bought the machines on which the early researchers worked and were visionary advocates who imagined that technology held far-reaching economic implications, way beyond the immediate military uses.

It was the era in which ideas being pursued at two laboratories located on opposite sides of Stanford University would re-shape the way we communicate. 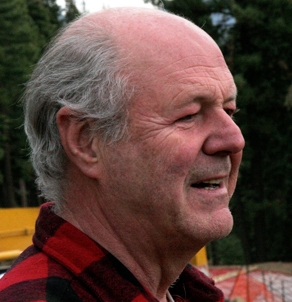 At one end of the Stanford campus was Doug Englebart’s Augmented Human Intellect Research Institute, dedicated to the concept that powerful computing machines would be able to substantially increase (augment) the power of the human mind. In contrast John McCarthy’s Artificial Intelligence Laboratory at the other end of the university began with the goal of creating a simulated human intelligence.

Charles ‘Chuck’ Moore, best known for the work in developing the Forth software language, was a disciple of McCarthy and his development of simple but powerful languages and applications owes a lot to his tutor’s clear mind.

Born in McKeesport Pennsylvania, near Pittsburgh, in 1938, Moore grew up in Flint Michigan he was granted a National Merit scholarship to MIT where he joined Kappa Sigma fraternity.

Awarded a degree in physics he arrived at Stanford where he studied mathematics for 2 years from 1961. He then worked on Fortran II for the IBM 704 to predict Moonwatch satellite observations at Smithsonian Astrophysical Observatory. Around this time he began learning Algol for the Burroughs B5500 to optimize and as Charles H Moore and Associates, he wrote a Fortran-Algol translator to support a timesharing service.

“Get a bare-bones application running quickly.
Demonstrate it and get feedback from users.
Then modify and expand capability: much
more satisfactory than planning in advance”

Moore co-founded Forth Inc. in 1971 with Elizabeth Rather, after which he developed the Forth-based chip that was taken to market in the mid 1980s by Harris Corporation as the RTX2000, derivatives of which are still being widely used by NASA. At Computer Cowboys, he designed the wonderfully named Sh-Boom microprocessor, and then co-founded iTV, an Internet Appliance manufacturer.

During the1990s, Moore used his own CAD software to design several custom VLSI chips, including the F21 processor with a network interface. More recently, he invented ColorForth and ported his VLSI design tools to it. His software is still in widespread use today.

Chuck Moore on the Lost Art of Keeping It Simple

0 116
Chuck Moore is still the radical thinker of Information Technology, After an astonishing career designing languages (e.g. FORTH), browser-based computers, CAD systems and CPUs, he is now energetically designing extremely low-powered 'green' multi-processor chips for embedded systems. Behind everything he does is a radical message: 'Embrace the entire problem, Keep it simple'.… Read more
0 116