You can find memory leaks in Python code with tracemalloc. In this article, Priyanka Nawalramka demonstrates how to use tracemalloc to find the leaks.

Memory profiling is useful when looking at how much memory an application is using. The most important use case, however, is when you suspect that the application is leaking memory, and it is important to trace where that leak occurs in the code.

A memory leak happens when a block of memory allocated by an application is not released back to the operating system, even after the object is out of scope and there are no remaining references to it. When this happens, memory utilization keeps increasing, until an OOM (out-of-memory error) occurs, and the operating system kills the application. If the utilization metric is plotted on a graph, it will display a constantly growing trend until the application dies. If the application restarts itself after the OOM, it will exhibit a sawtooth behavior, indicating the repeated increase and sudden drop at OOM. In programming languages where the compiler/interpreter doesn’t manage allocations, a leak can occur if the developer forgets to free allocated memory. It is, however, not uncommon, to see memory leaks in memory-managed languages as well.

Python manages memory allocations itself. Python’s memory manager is responsible for all allocations and deallocations on the private heap. By default, Python uses reference counting to keep track of freeable objects. The optional garbage collector provides supplemental mechanisms to detect unreachable objects, otherwise not reclaimed due to cyclic referencing.

Several tools are available for profiling memory in Python. This article covers “tracemalloc” which is part of the standard library. Getting started is very easy because no special installation is needed. One can start profiling and viewing the statistics straight out of the box. Tracemalloc provides statistics about objects allocated by Python on the heap. It does not account for any allocations done by underlying C libraries.

The profiler works by letting you take a snapshot of memory during runtime. There are several convenient APIs to then display the statistics contained in that snapshot, grouped by filename or lineno. It is also possible to compare two snapshots, which helps identify how memory use changes over the course of program execution. Finally, there are methods to display the traceback to where a block of memory is allocated in the code.

I will go through an example that simulates constant growing memory (similar to a leak) and how to use the tracemalloc module to display statistics and eventually trace the line of code introducing that leak.

Here is a one-liner function called mem_leaker() that will be used to simulate the memory leak. It grows a global array by ten thousand elements every time it is invoked.

I wrapped this function inside a script named memleak.py with some driver code. The first thing to do is to call tracemalloc.start() as early as possible in order to start profiling. The default frame count is 1. This value defines the depth of a trace python will capture. The value can be overridden by setting PYTHONTRACEMALLOC environment variable to a desired number. In this example, I am passing a value of “10” to set the count to ten at runtime.

The tiny for loop iterates five times, invoking the make-shift memory leaker each time. The call to gc.collect() just nudges Python’s garbage collector to release any unreachable memory blocks to filter out noise. Although, you can be sure this program does not create any cyclic references.

All the profiling code is written inside a separate script called profiler.py.

Going back to the for loop in the driver code, after mem_leaker() is invoked, profiler.snapshot(), which is just a wrapper around tracemalloc.take_snapshot(), will take a snapshot and store it in a list. The length of the list will be five at the end of the loop.

Once you have the snapshots, you can see how much memory was allocated. It can be useful to begin with per file grouping if the application is big, and you have no idea where the leak is happening. For demonstration, take a closer look at profiler.display_stats(); it displays the first five grouped items from the first snapshot.

At the top of the list, numpy’s numeric.py allocated 78.2 Kb of memory. The tracemalloc module itself will also use some memory for profiling. That should be ignored during observation.

Now, in order to debug further, The code compared the first snapshot with each subsequent snapshot to see the top ten differences using compare(). 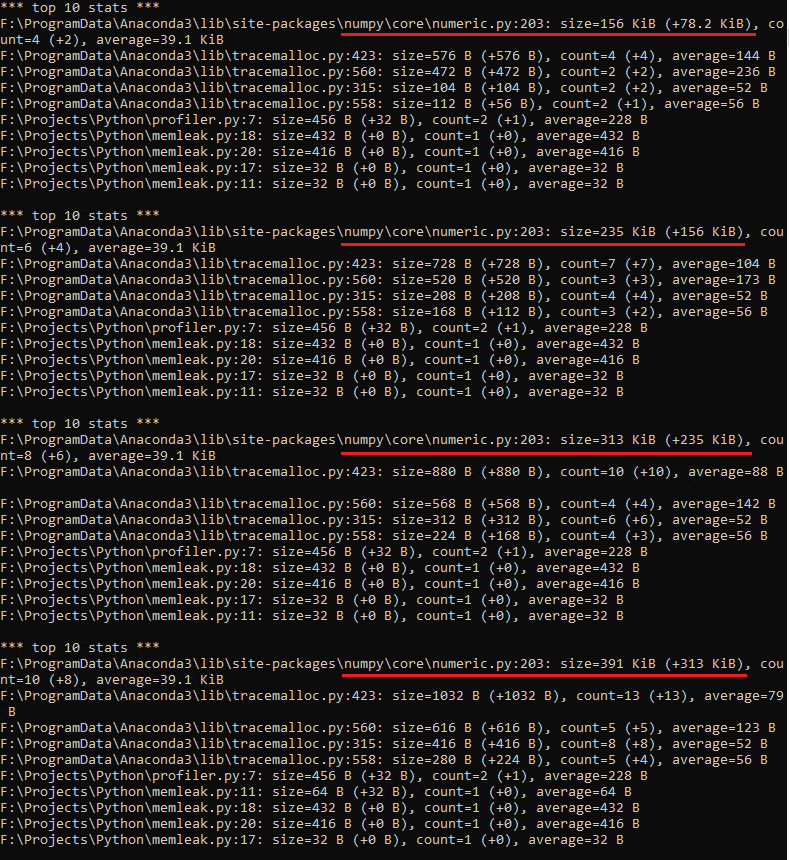 Since there were five total snapshots, there are four sets of statistics from the comparisons. Some important observations here:

In the first set, the total memory used by numeric.py is 156 Kb, an increase of 78 Kb from the first snapshot.

In the second set, total memory used by numeric.py jumps to 235 Kb, a total increase of 156 Kb from the first snapshot. Doing a little math, this also means there was an increase of ~79 Kb since the last snapshot.

In the third set, total memory used by numeric.py jumps to 313 Kb, a total increase of 235 Kb from the first snapshot. This also means there was again an increase of ~78 Kb since the last snapshot.

In the fourth set, total memory used by numeric.py jumps to 391 Kb, a total increase of 313 Kb from the first snapshot. This also means there was, once again, an increase of ~78 Kb since the last snapshot.

The last thing in the example was to print the traceback for the largest memory block for more granularity. In this case, the largest block is one from numeric.py. The filter_traces() method is very helpful in eliminating noise when debugging long traces.

This trace leads from the application code to the line in the numpy library, where the allocation actually takes place. You can look at the source code here – https://github.com/numpy/numpy/blob/main/numpy/core/numeric.py#L204.

Here, you saw a simple demonstration of using Python stdlib’s tracemalloc module to observe various memory related statistics, compared snapshots to see the allocation deltas and used all this information to trace back to the code using a substantial amount of memory. In large applications, it may take some time to narrow down scope and find the line of code introducing a leak. The tracemalloc module provides all the necessary APIs to do so, and it just works out of the box.

Priyanka is a Software Engineer with more than a decade of industry experience. She has helped develop and maintain several software products in the storage, security and cloud space. She loves programming and solving interesting problems with the best of latest technology.

View all articles by Priyanka Nawalramka