Our fictitious company, called Inframan, has approximately 500 employees. Most of them are located on the internal network, but there are also quite a number of employees who access the Exchange 2007 environment from the Internet. On the internal network, a mix of Outlook 2003 as well as Outlook 2007 is being used, and remote workers have a laptop with Outlook 2007, and a mix of mobile devices using ActiveSync to keep in sync with the Exchange Server 2007 environment. Being a typical customer, Inframan also uses Public Folders, not only for free/busy information and to download the Offline Address Book, but also for storing company wide documents, digital invoices, etc.

From a message hygiene perspective, an Exchange Server 2007 Edge Transport Server is used between the Internet and the internal network. The Edge Transport Server has anti-spam enabled; Real-time Block Lists (RBL) are used in conjunction with Content Filtering to minimize the amount of spam coming in from the Internet, and a Threat Management Gateway (TMG) was recently installed. All clients now connect to the TMG Server and from the TMG Server, and client requests are forwarded to the Client Access Server. 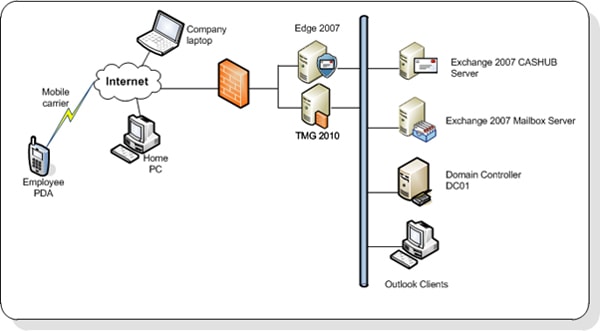 The externally accessible fully qualified domain names (FQDN) that are in use at Inframan are webmail.inframan.nl and autodiscover.inframan.nl. These FQDN’s are used internally as well, but to prevent internal Outlook 2007 client to be rerouted to the TMG server a “split DNS” is used. Factoring in this internet-facing security, the external IP address for webmail is the external address of the TMG server, while the internal IP address for webmail is the IP address of the Exchange 2007 Client Access Server. To achieve this, a DNS zone is created on the internal DNS server for ‘inframan.nl’, where the internal Address (“A”) records are stored.

Figure 2. The internal DNS zone for the split DNS implementation

All external IP addresses for inframan.nl must be stored in the internal DNS zone. If you forget to, for example, include the Address record of the external webserver, then internal clients cannot resolve its IP address, and accessing the site via an internet browser will fail!

This setup has been working successfully for a couple of years now, but since Inframan needs to upgrade their hardware, it was decided to upgrade to Exchange Server 2010 SP1 at the same time.

The upgrade path for the Inframan scenario is as follows:

Of course, before you try and upgrade, you need to make sure you have all of the prerequisites in place for Exchange 2010 SP1 with respect to Active Directory, which are:

Microsoft has a Supportability Matrix where you can quickly check all requirements for Exchange Server 2010, which can be found on the Microsoft TechNet site:. As far as Exchange 2007 is concerned, it needs to be on at least an Exchange Server 2007 Service Pack 2 level. Assuming you’ve got all the prerequisites in place, let’s take a look at the steps of the upgrade.

Changing the Active Directory Schema isn’t that different than in the Exchange 2003 to Exchange 2010 upgrade path, so I won’t go into detail about that. It’s just a matter of running the setup.com /PrepareSchema command to achieve this.

So, you’ll need both the Exchange 2007 and Exchange 2010 versions of the Administration Tools to manage a coexistence scenario with Exchange Server 2007 and Exchange Server 2010, and thankfully both versions of the Administration Tools can coexist on the same Management Server or Management Workstation. Background aside, you can accomplish the changing of the Active Directory Forest Configuration using the setup.com /PrepareAD command.

Next, when running the setup.com /PrepareDomain (or /PrepareAllDomains if you want to change all of the domains with Exchange Server objects in one command), the Active Directory Domain is finally prepared for Exchange Server 2010.

Of course, there’s no actual need to change the Active Directory manually as outlined above. You can also start the graphical setup program (setup.exe on the installation media) and just install the first server, which automatically invokes the Active Directory changes, assuming you have sufficient permissions of course.

So, we are going jump ahead to after the installation of Windows Server 2008 R2 is complete, and the following prerequisites are now required before installing the first Exchange Server 2010 Server role:

Internet Information Server is part of the prerequisite software as well, but this feature will be installed as part of the actual Exchange Server role installation, so it’s not really worth mentioning here. Additionally, over time, the last bullet won’t be a manual step anymore, as the Windows Server 2008 R2 Server will eventually be automatically updated using Windows Update (or your own patch management solution in the future, of course).

After preparing the two new Exchange 2010 servers, it is time to think about moving resources from Exchange 2007 to Exchange 2010. The following steps need to be performed:

There’s no real need to follow the first three steps in this specific order; it is also possible to, for example, configure the Exchange 2010 Mailbox Server and setup Public Folder replication first. It’s really up to you to choose what to do first.

Figure 6. The 2007/2010 coexistence scenario. All communication is going through the Exchange 2007 server.

So, we have to figure out a way to change the message routing and the client access methods with as little downtime as possible.

For the normal SMTP message flow, only port 25 needs to be opened on both firewalls. For the synchronization to take place from the internal Exchange 2010 Hub Transport Server to the DMZ Exchange 2007 Edge Transport Server, port 50636 needs to be opened, but only from the inside out -There’s no need to open this port from the DMZ back to the internal network.

This can easily be checked by examining the header information of a new message. It should read something like:

If you’ve done this correctly, then when clients access the Exchange 2010 CAS Server using https://webmail.inframan.nl/owa</strong, and their mailbox is still on Exchange Server 2007, they are silently redirected to https://legacy.inframan.nl/owa, which is actually the Exchange 2007 CAS Server. This therefore means that the current publishing rules on the TMG Server need to be changed as well for this upgrade to work:

Walking through all of that is a little outside the scope of this article, so we’ll have to come back to that in part 2.

Now for those pesky PSTs…
When you are installing Exchange Server 2010, you are likely to have a headache with locating and migrating all the old PST files, including calendars, contacts and tasks. Red Gate’s PST Importer 2010 makes quick work of the whole process of finding and importing PSTs into Exchange mailboxes or user’s Online Archives. Try it for free for 14 days and find where all your PSTs are hiding.

0 19
Having gotten us up and running with the basics of Office365, Jaap Wesselius now dives deeper, walking us through the setup process for Lync Online, the Office365 component which provides cloud-based Unified Communications. He even shows us how to integrate it with our on-premises systems in quick, easy steps.… Read more
0 19