Microsoft released Exchange Server 2010 in October 2009, and this new version of Exchange Server contains a lot of compelling new features such as the new High Availability, the facility to store your Exchange databases on JBOD (Just a Bunch of Disks), the archiving option and the new Outlook Web App. Oh, and do not forget the new Windows Mobile 6.5 and its new mail client.

Suppose we have a fictitious company called Inframan, which is a consulting company specializing in bridges, tunnels, buildings etc. Inframan has approximately 500 employees, 50 employees are working in the office, 450 employees are working ‘in the field’. Employees within the office have their own desktop which connects to an Exchange 2003 Mailbox Server using Outlook 2003 and Outlook 2007. Employees outside the office connect to the office using their company laptop with Outlook 2007 and Outlook Anywhere and with Windows Mobile devices. When needed they can use their PC at home to use Outlook Web Access to access their mailbox. Typical usage profile is “light”, approximately 25 messages are received per day and 10 messages are sent per day, per user that is. Behind the firewall is an ISA Server 2006 acting as a reverse proxy to publish all Exchange Services to the Internet. Inframan’s environment will look something like this:

Inframan is using only one namespace for accessing all services from the Internet: webmail.inframan.nl. This is used for Outlook Web Access, Outlook Anywhere and Windows Mobile devices.

Be careful when upgrading your Active Directory Domain Controllers since not all versions are supported to run with Exchange Server 2003. For a complete overview check the Microsoft Technet Site: http://technet.microsoft.com/en-us/library/ee338574.aspx. 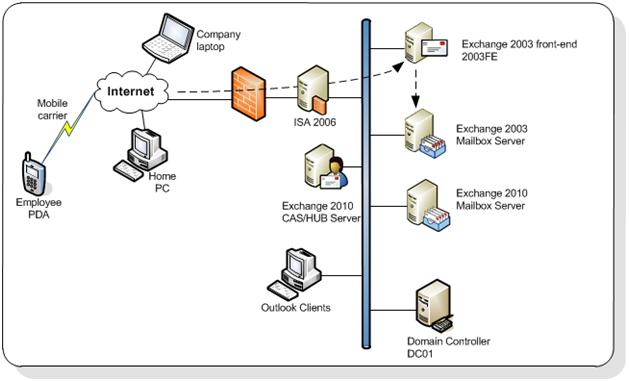 The servers that will hold the Exchange Server 2010 server roles have the following prerequisites:

Make sure that after installing Windows on the servers that they are up-to-date with the latest hotfixes and service packs.

Setup.com /PrepareLegacyExchangePermissions – Exchange Server 2003 uses the Recipient Update Service to stamp the user with the appropriate Exchange attributes during provisioning. This is replaced in Exchange Server 2010 by E-Mail Address Policies. The /PrepareLegacyExchangePermissions parameter changes security settings so that both the Recipient Update Service and E-mail Address Policies can coexist in the same Active Directory;

Setup.com /PrepareSchema – This command upgrades the Active Directory schema to include the Exchange Server 2010 extensions. This can be checked by using ADSIEDit and checking the value of the UpperRange parameter of the  CN=ms-Exch-Schema-Version-Pt object in the Schema. This should have one of the following values: 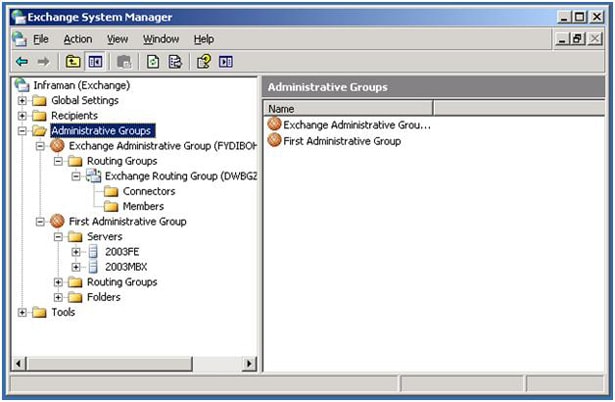 Setup.com /PrepareDomain – This is the last step in preparing the Active Directory and will create all necessary groups in the domain being prepared.

When Active Directory is fully prepared we can continue with installing the first Exchange Server 2010 server in the environment. For our example, this has to be the combined Hub Transport and Client Access Server. Start the graphical setup program (setup.exe) and download the Language File bundle if needed. If you select “install only languages from the DVD” only the language setting of your DVD (for example English or French) will be available. This is used not only for the language of the Exchange Server, but also the available language settings for the clients being used. 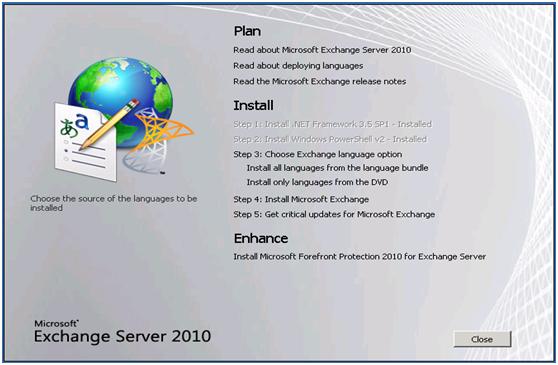 During the installation of the combined Hub Transport and Client Access Server a so called ‘custom setup’ will be used. This means we can select which server roles will be installed. In the Inframan example the following needs to be selected during setup: 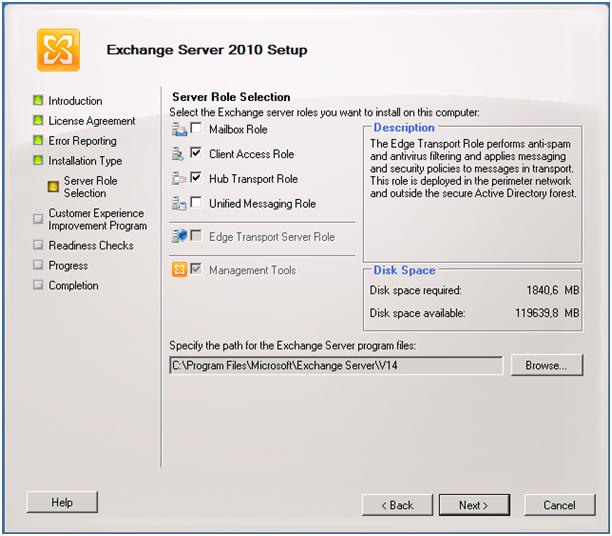 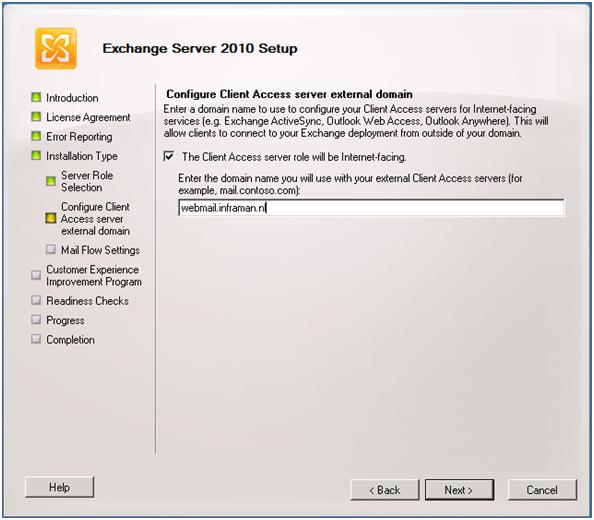 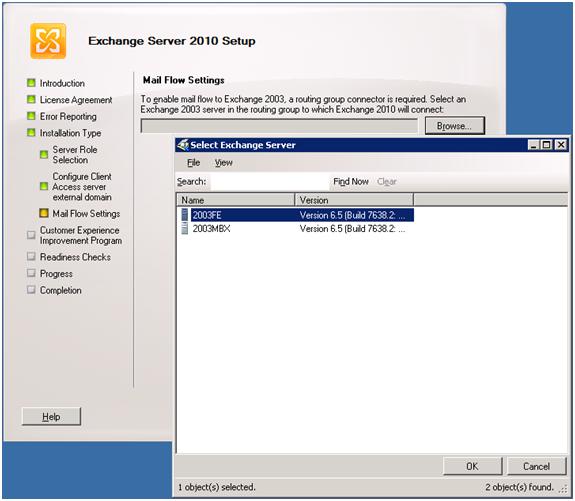 Note that this choice can be changed and/or added to after setup is complete.

Now finish the setup wizard and install the Client Access and Hub Transport Server roles on this server.

It is also possible to use the command line setup application to setup the above mentioned configuration. Open a command prompt, navigate to the installation media and enter the following command:

Before installing the Exchange Server 2010 Mailbox Server role a proper storage design has to be made. Microsoft has recently released the new storage calculator, which is now called the “Exchange 2010 Mailbox Server Role Requirements Calculator” and can be downloaded here:

The Requirements Calculator will show the following results:

An interesting part of Exchange Server 2010 is the database technology. Microsoft has made significant changes to the database structure to lower the disk performance requirements. It should be sufficient to run the Mailbox databases and its accompanying log files from SATA disks.

When both Exchange servers are installed it is time to configure the Exchange environment properly before Exchange Server 2010 can be used and mailboxes can be moved. The following needs to be configured:

On the new Mailbox Server there are two drives, from a hardware perspective configured as outlined before. These drives are F:\ for the Mailbox Databases and the Public Folder database and drive G:\ for the Log Files.

If needed create new databases and locate the new database file on drive F:\ and the accompanying log files on driver G:\

During the coexistence phase Internet clients will connect to the Exchange Server 2010 Client Access Server while their mailbox is still on Exchange Server 2003. The client request will then be redirected to the old Exchange Server 2003 front-end server. This server will therefore get a new FQDN (Fully Qualified Domain Name) and thus need a new certificate. This new FQDN will be legacy.inframan.nl.

This will make sure that when a user connects to Exchange Server 2010 Client Access Server for Outlook Web Access and the mailbox is still on Exchange 2003 the client will be redirected to the old Exchange Server 2003 front-end server.

During installation of the Mailbox Server a new Exchange Server 2010 Mailbox Database will be automatically created. After installation you have to make sure that this database is moved from the default location to an alternate location for recovery and performance reasons. 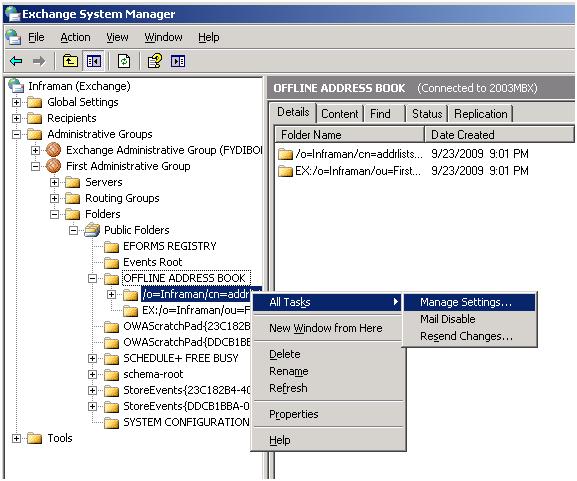 The “Manage Public Folder Settings wizard” will appear. Click Next on the Welcome page and select the “Modify lists of replica servers”. Follow the wizard and add the Exchange Server 2010 Mailbox Server role as a new replica. When finished, the folder and all its subfolders will be replicated to the Exchange Server 2010 Public Folder database. Repeat this step for the second Offline Address Book folder and the Schedule+ Free Busy folder.

Note: When the “Manage Settings” option is not available you can select “Properties” and select the replication tab to add the Exchange Server 2010 Public Folder Database.

Note: replication of public folders can take quite some time. 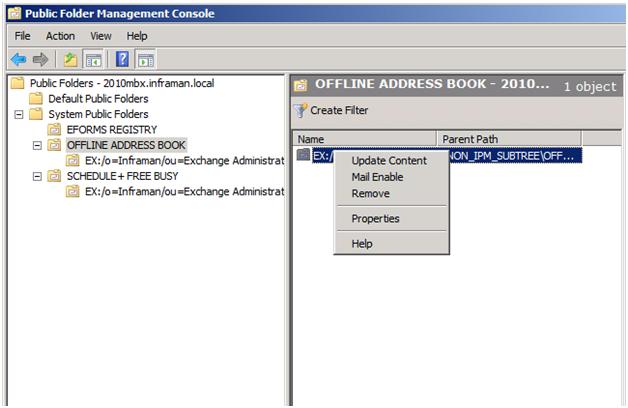 Repeat these steps for the Schedule+ Free/Busy folder.

In the next article I will cover the actual movement of the mailboxes and the steps that are needed to decommission the Exchange 2003 servers like moving the Offline Address Book generation server and conversion of Recipient Policies and Address Books.

Now for those pesky PSTs…

When you are installing Exchange Server 2010, you are likely to have a headache with locating and migrating all the old PST files, including calendars, contacts and tasks. Red Gate’s PST Importer 2010 could well be the answer to your, and your users’, prayers. Try it!

0 91
Many applications require the handling of geospatial data. Roy and Surenda take you through the basics of SQL Server spatial data types. … Read more
0 91

0 3
SQL Server replication works well on a low latency, high bandwidth network. When actual networks have high latency or limited bandwidth, problems may occur. Such conditions can be emulated with hardware or software tools. You can quickly set up a test environment to emulate high latency and limited bandwidth by using free, open source software. … Read more
0 3