Backing up Exchange 2010 For Free

It's hardly surprising that many SysAdmins are willing to pay over the odds for sophisticated backup solutions which they don't necessarily need, just to make sure their data is safe ASAP. Thankfully, Antoine Khater is here to give you a short and sweet walkthrough on how to keep your Exchange 2010 Server backed up for free. And the best news? You've already got everything you need.

So you have deployed Microsoft Exchange 2010 in your enterprise, and you are now sitting back and enjoying this state-of-the-art enterprise mailing solution when, suddenly, you realize that you seriously need to backup this business-critical data (which emails have become, for any business today).

Before rushing out and investing in 3rd party solutions to protect your data, why not first inspect free and built-in alternatives to see if they can fit your business needs?

In this article I will cover the essentials of how to backup your Microsoft Exchange 2010 databases using Windows Server Backup, which ships with your Windows Operating System (and thus is essentially free of charge). While this is a quick and effective basic solution, I will also go on to highlight the shortcomings of this solution compared to other, more expensive solutions. If you follow each of the steps I describe, you should find your experience to be similar to the screenshots I’ve provided as examples.

First, I need to point out that Microsoft has enabled Windows Server Backup to take VSS backups of the Exchange databases in Exchange 2007 SP2, so the following can work on Exchange 2007 SP2 or Exchange 2010, on Windows 2008 or Windows 2008 R2. You will find a similar walkthrough for Exchange Server 2007 R2 in an earlier article by Jaap Wesselius; while there is some overlap, there have also been some changes since then. Nevertheless, it is an excellent article, and well worth reading (both on it’s own merits, and because Jaap and I have included details in different areas). Just so you know what you’re looking at in this article, the screenshots here specifically apply to Exchange 2010 running on Windows 2008 R2.

By default, the Windows Server Backup Feature is not installed with your Windows Server, so we need to install it by, either by using the “Add Feature” as shown in Figure 1. 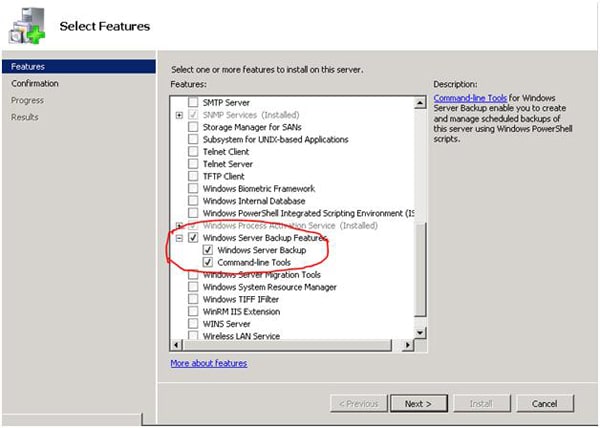 Or, if you prefer the Command Line Interface like me, using PowerShell:

The expected outcome is shown in Figure 2, below:

If you have completed all of the above steps successfully, you should now be able to find “Windows Server Backup” in your Administrative Tools; go ahead and run it.

From the task pane, on your right-hand side, select “Backup Schedule” or “Backup Once” depending on your needs. This article will illustrate the “Backup Once” procedure, as shown in figure 3, but both are pretty similar.

On the next screen, and since I have selected “Backup Once“, the only option available is to select “Different Options“; do so and then click next. 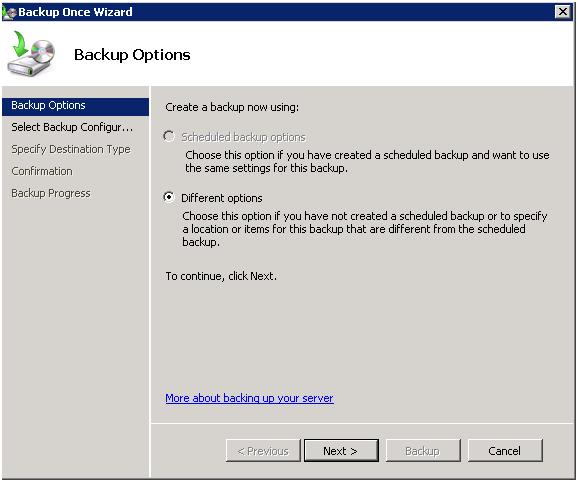 In the “Select Backup Configuration” section, we will choose “Custom“. 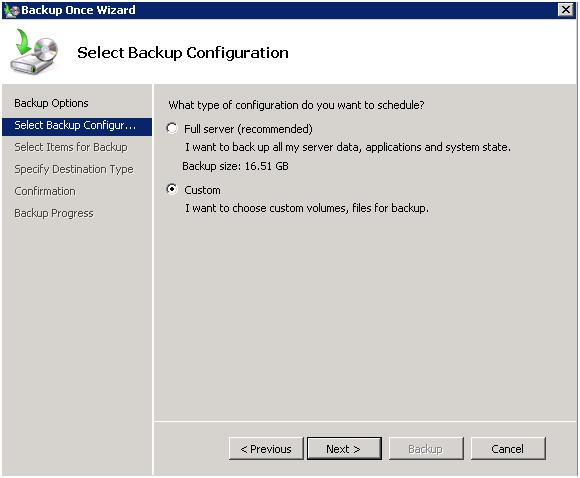 The “Select Items for Backup” section is obviously the most important part of our configuration. First click on “Add Items” and select the folder holding your Mailbox Databases and their associated logfiles, as shown in figure 7. In Exchange 2010, by default, this folder is located at C:\Program Files\Microsoft\Exchange Server\V14\Mailbox

Note: One of the new features in Windows Server Backup in 2008 R2 is that you can now select individual folders to backup, instead of entire volumes. 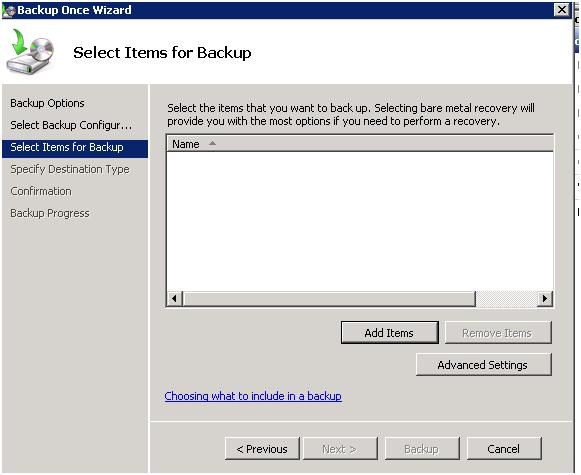 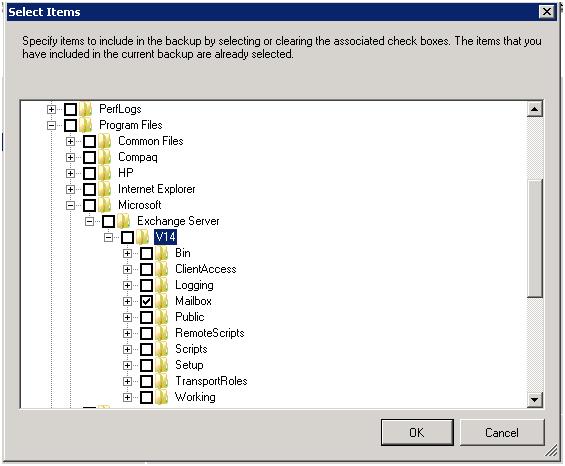 After you have selected the mailbox folders but before you go to the next screen, click on “Advanced settings” and then “VSS Settings“, making sure to select “VSS Full Backup” as shown in figure 8.

In the next screen, I have selected to use a remote shared folder… 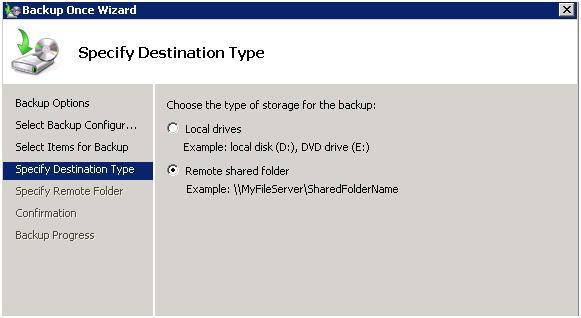 …And selected the shared folder I am planning to backup to. 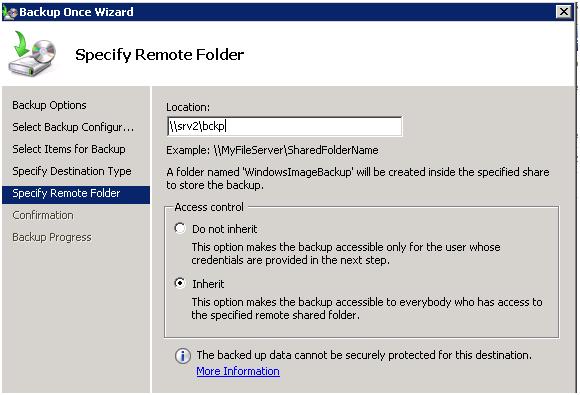 Finally, confirm your backup options, and wait for the process to finish. 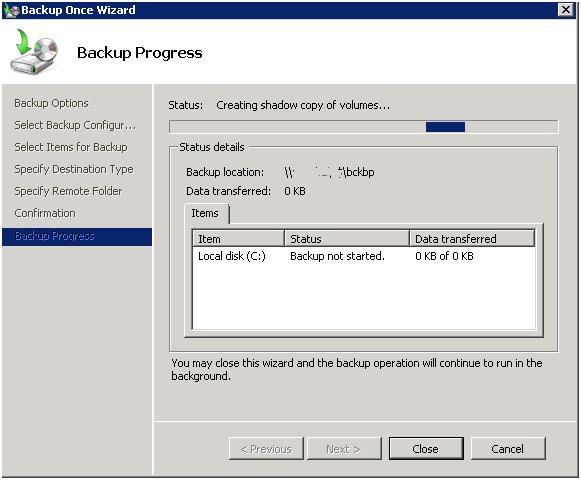 Another new feature that’s come with the Windows Backup Server of Windows 2008 R2 is that, on Windows 2008 R2, backups can be taken from both the Active and the Passive databases of a DAG (Database Availability Group). This is pretty good news because, in Windows 2008, backups could only be taken from the Active Node. This meant that, in the event of a database failover to any node other than the one where backup was configured, all subsequent backup jobs would fail. Thankfully, that is not something you need to worry about anymore in Windows 2008 R2.

If you’re curious, you can see the difference in the event reports; figure 12 shows the backup from an Active Database, and figure 13 shows one of the passive database:

Figure 12: Event log after successful backup from the Active Database

Figure 13: Event log after successful backup from the Passive Database

Whether or not these are significant drawbacks will most likely depend largely on the situation and environment you find yourself in. Extremely large or highly sophisticated organizations will possibly need to look for 3rd party solutions, but this approach is perfectly serviceable, and a useful stop-gap solution if you are currently looking for a more fine-grained option.

Windows Server Backup is greatly improved in Windows 2008 R2 (as compared to Windows 2008). Specifically, in the “Backing-Up Exchange 2010” section above, we saw two very important new features in R2: The ability to backup a specific folder rather than a volume and, when running Database Availability Groups, the flexibility to backup from both an Active or Passive database.

Although this gives SysAdmins a lot more choice and flexibility with regards to how they run their backups, this approach has its own limitations when compared to some dedicated backup solutions. That being said, it is good enough for most businesses.

In my next article, we will look at the restore procedure and scenarios, but until then, backup your databases.

Antoine has been working in IT consultancy and solution integration since 1998, and considers himself lucky to be one of the few making a living out of his passion. On the side, he has also been a MCSE since 1999, and recently upgraded to being a MCITP, including MCITP: Enterprise Messaging Administrator 2007/2010 and an official Microsoft Certified Trainer (since 2001). He blogs regularly at ZeroHourSleep, and can also be found on twitter as @zerohoursleep.

View all articles by Antoine Khater