The best way of checking SQL Server backups is to restore them and run DBCC CHECKDB on the restored database. To do this regularly means that you need to automate the task. Allen White shows how, with PowerShell.

You’re a good DBA, and you know that the first thing a DBA has to do is make sure that backups are done.  Every one of us knows that our backups are the first most important thing we’re responsible for, so we make sure they’re done. So my next question to you is ‘have you tested them?’

Sure we all periodically have to restore a copy of a database to recover some data that got inadvertently deleted, and we haven’t had a problem with that, so we’re good, right? Well, not necessarily. Are we really good? Are we testing all of our backups? Are we running a DBCC CHECKDB against those databases? Sometimes running CHECKDB can impact server performance in unfortunate ways, so maybe we’re not doing that as consistently as we should. Is that bad? (Yeah, it really is. You know it, but you’re busy, and we’ve got all these user requests we’ve got to get done first, right?)

One of the things I love about PowerShell is the ability to automate tasks, so my solution to this problem uses PowerShell and the new Backup-SqlDatabase and Restore-SqlDatabase cmdlets I presented in my last article.  I’ve created a script which you can download, use, modify or just study.  It uses two separate instances of SQL Server, which you specify on the command line when you invoke the script, and a directory which is accessible by both instances, and to which the service accounts for both instances have full rights. I’ve added an alternative version for Red Gate SQL Backup Pro as an attachment to this article.

The first thing we want to do is create a backup of all the user databases in the first instance.  I’ll assume that this instance is your production instance, and has the databases which your business relies upon. We don’t want to interfere with the log chain in these databases, so we’ll do a ‘copy only’ backup.  As it backs these databases up it writes the backups to the directory you’ve specified on the command line, and since both Enterprise and Standard editions of SQL Server 2008 R2 and newer support backup compression, we’ll include that option as well.

After the backups are complete we’ll connect to the destination instance and determine the default file and log directory locations, so we can intelligently place the data files as we restore them.  We’ll also use WMI (Windows Management Instrumentation) to determine the space available on the destination drives, and use that to make sure we have enough space on those drives before attempting to restore the databases.

Finally we’ll run DBCC CHECKDB against each of the user databases on the destination server, to make sure that there aren’t any corruption issues in the production databases that haven’t been caught yet.

The first thing we’ll do is to provide comment-based help for anyone wanting to use the script. To see the results of this use the Get-Help cmdlet followed by the path and name of the script.

As always, we should provide error handling, and I still tend to use the Trap function for that purpose. (Note that I specify ‘continue’ after the break, because I want to try to restore each database backed up, even if one restore might fail.)

Because the new backup and restore cmdlets are part of the SQL Server 2012 SQLPS module, we need to test to see if it’s loaded, and load it if it hasn’t already been.  Also, because loading the module changes the current location the script’s running in, I added Push-Location to store the current location before loading the module, and Pop-Location after it, to return us to our original location.

If you want to use SQL Backup Pro, you’ll need to use Transact-SQL. Normally you’d use the Invoke-Sqlcmd cmdlet to send T-SQL to the server, but there’s a bug (that’s been fixed – see Connect: invoke-sqlcmd -querytimeout 0 still times out by Grant Fritchey) that may prevent large databases from backing up correctly.  Instead, ADO.NET makes perfect sense. (Notice that we open the connection to run the query, then close it after it’s done, following database development best practices.)

We use these commands instead of the Backup-SqlDatabase command.

The backups are done, so it’s time to connect to the destination instance using the SMO Server object, and determine the default file and log locations for the destination databases.

Using the Win32_LogicalDisk namespace in WMI, we can capture the size and free space on each of the disk drives on our destination server.  We’ll store just the disk drive (DeviceID) and free space in note properties in a system object and add them to a collection we’ll use during the restore process.

Now, for each backup we’ll store the filename and database name in simple string variables and create a new backup device item object for the backup.  This backup device gives us a lot of information about the backup, which we’ll use when restoring on the destination instance.  We’ll also create an empty collection for the relocation objects we’ll need to be able to ‘MOVE’ the restored database data files to the new directories on the destination instance.

Firstly, this is the way of doing this for native backup.

We have to create an SMO Restore object to be able to read the contents of the backup device, so we’ll do that, and add the backup device to the Restore Devices collection.  We can then use the Restore’s ReadFileList() method to see what files need to be ‘moved’.

For each file we want to determine the filename and path, and its size on disk.  We can use PowerShell’s Split-Path cmdlet with the -Leaf argument to get just the file name without the path (which is useful, since we’ll be placing that file into a new directory on a new drive anyway) and again later with the -Qualifier argument on the default file or log path to determine the just the disk drive for our space calculation.  We’ll create a RelocateFile object for each file, set its properties for LogicalFileName from the source file list and PhysicalFileName from the default file or log directories combined with the physical file name we split out, and we’ll save the file size for the next step.

If using SQL Backup Pro, you’d instead use

We want to make sure we’re not going to run out of space, so we loop through the disk drive collection we stored earlier, and subtract the amount of space for the file from the FreeSpace property in the collection for that drive.  Then, after setting a variable called $spaceok to $True, we loop through the drives looking for any where the space has fallen below zero. If we find one, we set the variable to $False.

The last thing we need to do is to run DBCC CHECKDB against all the databases on the destination server.  That’s done via an SMO Database method called CheckTables.  Any errors returned by the CHECKDB will be returned to the console, and will also be posted on the server’s error log for later reference.

The complete script can be downloaded here for Native Backup and here for Redgate Backup. Both are also from links on the right of the title to the article

I’ve used a set of virtual machines I’ve built with a domain controller (where I’ve also put the file share to store the backup files), a client machine where I’m running the PowerShell console, and two servers running SQL Server 2012 on Windows Server 2012 Core.  I’ve set up a set of databases on WS12SQL01, the “production” server, and we’ll restore those databases and test them on WS12SQL02.  The share where the databases will be stored is \\WinSrvrDC\BackupWork and the SQL Server service account on both WS12SQL01 and WS12SQL02 has full access to that share.

To test the help features, first I’ll use Get-Help with the name of the script. 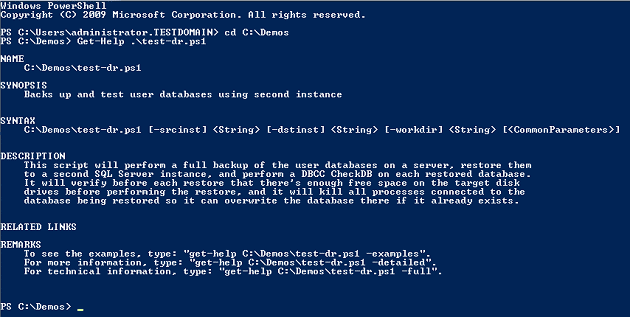 Now, to run the script with the proper parameters.

Using the Backup-SqlDatabase and Restore-SqlDatabase cmdlets allows you to see the progress of the backups and restores while the script’s running.

By running this script on a regular basis you can test to make sure your backups are sound and usable, and that your production databases don’t have hidden corruption, without impacting your production environment.

0 7
There are a handful of options when backing up SQL Server databases. A DBA must understand the differences and come up with a plan that protects the organisation’s data. In this article, Pamela Mooney explains service level agreements, recovery models, and some strategies to ensure that the data can be restored quickly.… Read more
0 7

0 6
Almost every environment now a days need to source data from different source system. Here is how you can establish connection using Attunity Connector from Microsoft SQL Server to Oracle Database  from SSIS. This method is extremely fast if you want to land millions and millions of records on the fly from Oracle to SQL Server. … Read more
0 6