If your organisation is committed to using Oracle Business Intelligence Enterprise Edition (OBIEE) 10g/11g /12c as their BI solution, you aren't thereby committed to using Oracle throughout your organisation. You can use a range of data sources including SQL Server, and save a great deal of money by doing so. Sadly, Oracle will only support the use of the venerable SQL Server 2008 R2. Zafar Ali demonstrates how to connect OBIEE to the world beyond Oracle

Most of the enterprises that use Oracle Business Intelligence Enterprise Edition (OBIEE) 10g/11g /12c for their business analytics and reporting will be using Oracle Enterprise Database as their underlying source of data. However, there are plenty of other options: By adopting other relational database systems as well, such as SQL Server, NoSQL, or cloud hosted databases, it is possible to provide a more versatile, scalable and cost-effective reporting solution. By using these other data sources, It can keep options open for the business, and avoid having to commit to an Oracle-only solution. This has the advantage of avoiding the perpetual license and the initial Oracle database setup cost but you lose the advantage of Oracle support and the integration of heterogeneous technologies. You also lose the core Oracle Data Warehouse features such as parallel processing, bitmap index, cost based optimizer and the Very Large Database (VLDBs). However not all enterprises need these features and many are still using Oracle Database 11g/12c with Oracle 7i or 8i anyway. The loss of these features are therefore unlikely to prove to be a show stopper.

We have five main options for data sources that we can use to integrate with Oracle Business Intelligence Enterprise Edition (OBIEE) 10g+:

The cost of deploying a small sized Oracle Data Warehouse (DWH) on three servers (Dev, Test and Production) with following hardware specification – based on the current Oracle Price List: The three servers and their platforms would be:

For time being we will ignore the cost of the Extract Transform and Load (ETL) element, and will focus on the estimated cost of Oracle Database setup on these three server environments.

This will come to a total estimated cost of $276K per server (Total of $828K to cover the cost of 3) for perpetual licenses for Oracle Database Enterprise Edition. In addition there are other cost factors such as

Now if we then factor in the cost of hardware and other resources, the company will end up paying around $500K in its first year and perhaps an estimate of $200K per annum afterward. You could, of course, get a cheaper Oracle Database version such as Standard Edition (SE), which doesn’t have an option of add-on, losing the Tuning Pack, the partitioning option and various other high-end Data Warehouse (DWH) performance-tuning features.

If we start looking around for alternative RDBMSs to Oracle Database, we will find two main conventional RDBMSs that are competitive: IBM DB/2 or Microsoft SQL Server. For this article we will not be looking at other options such as MySQL, PostgreSQL that are more difficult to make direct comparisons with.

Unfortunately, Oracle does not support any of the recent versions of SQL Server. Oracle currently only support Microsoft SQL Server 2005, 2008 and 2008 R2 for Oracle’s Repository Creation Utility (RCU) and BI Publisher connectivity – based on OBIEE 11g (11.1.1.7.0) certification matrix. Other later versions seem to work but they aren’t supported by Oracle. 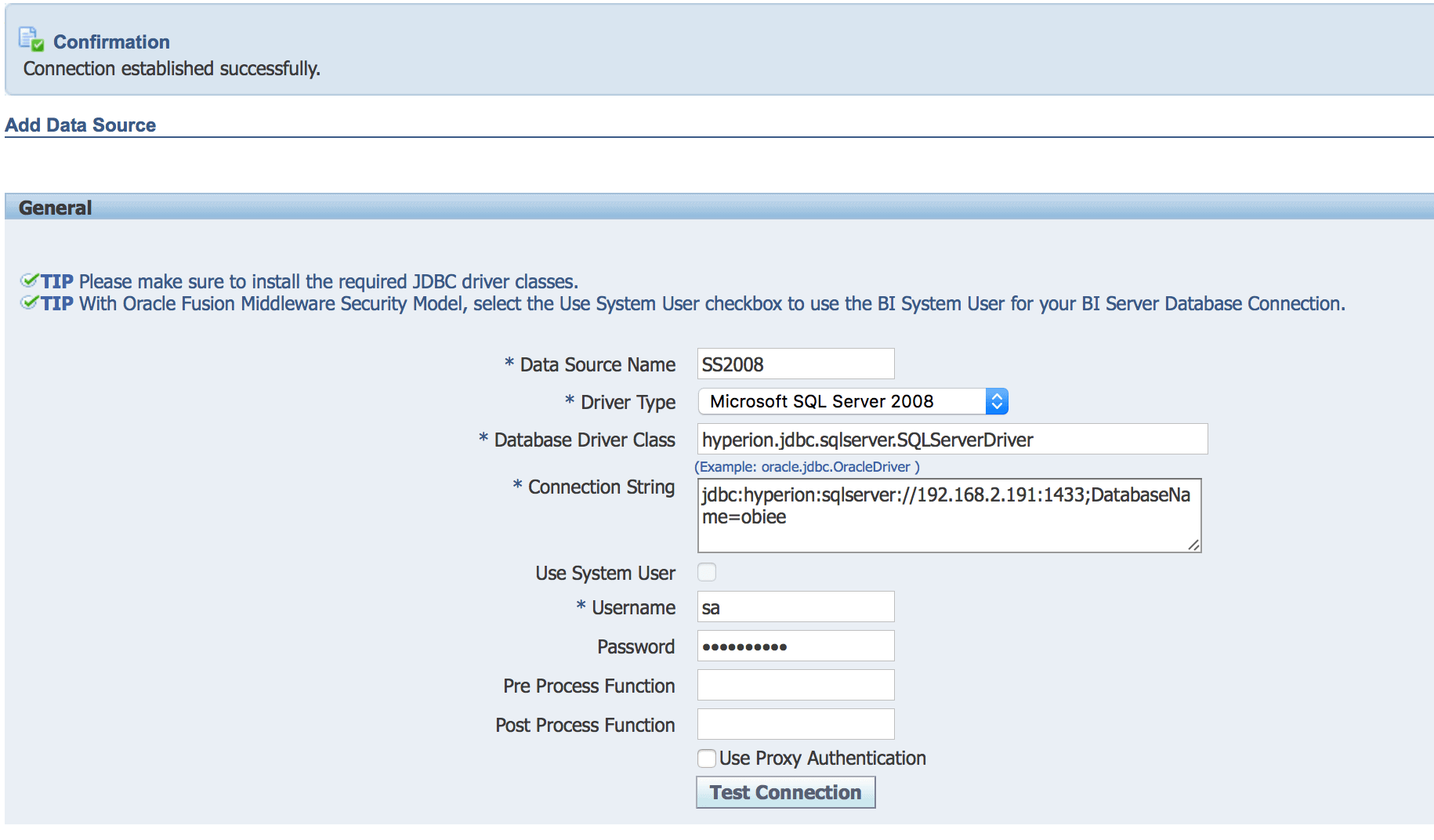 Installing MS SQL Server 2008R2 is done very straightforwardly by downloading the package from Microsoft website. Once installed it will create an entry on the windows start menu 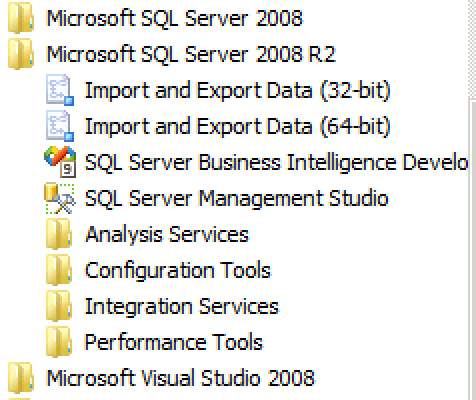 [Note: my Server is UK English, if you have an USA locale installation then your DDL command will be like ]

After running this script, navigate to RCU.bat and wait for RCU screen to pop up and then follow on screen instructions until you reach the screen “Database Connection Details” 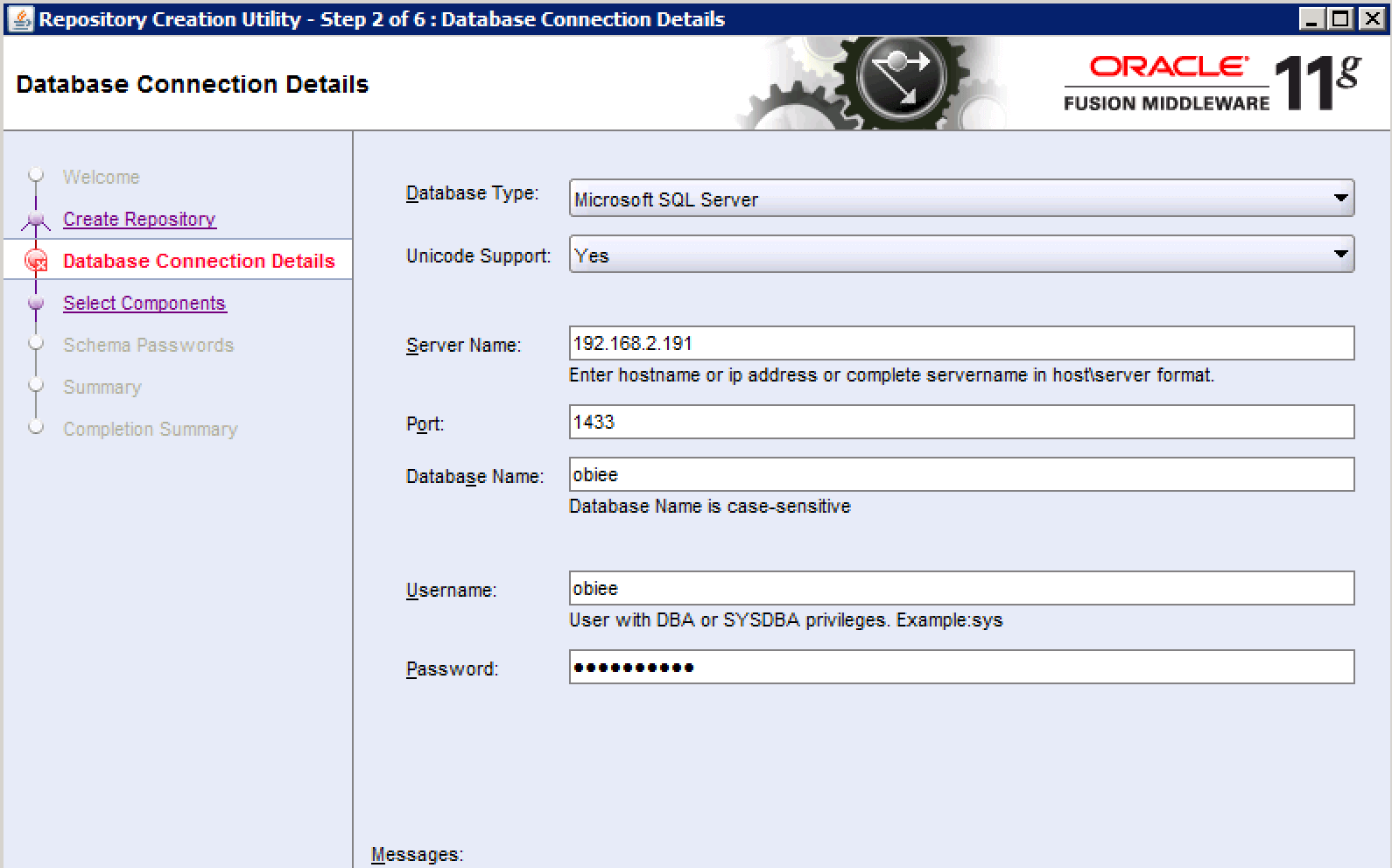 Once RCU checks all the pre-requisites, it should look like the following screenshot 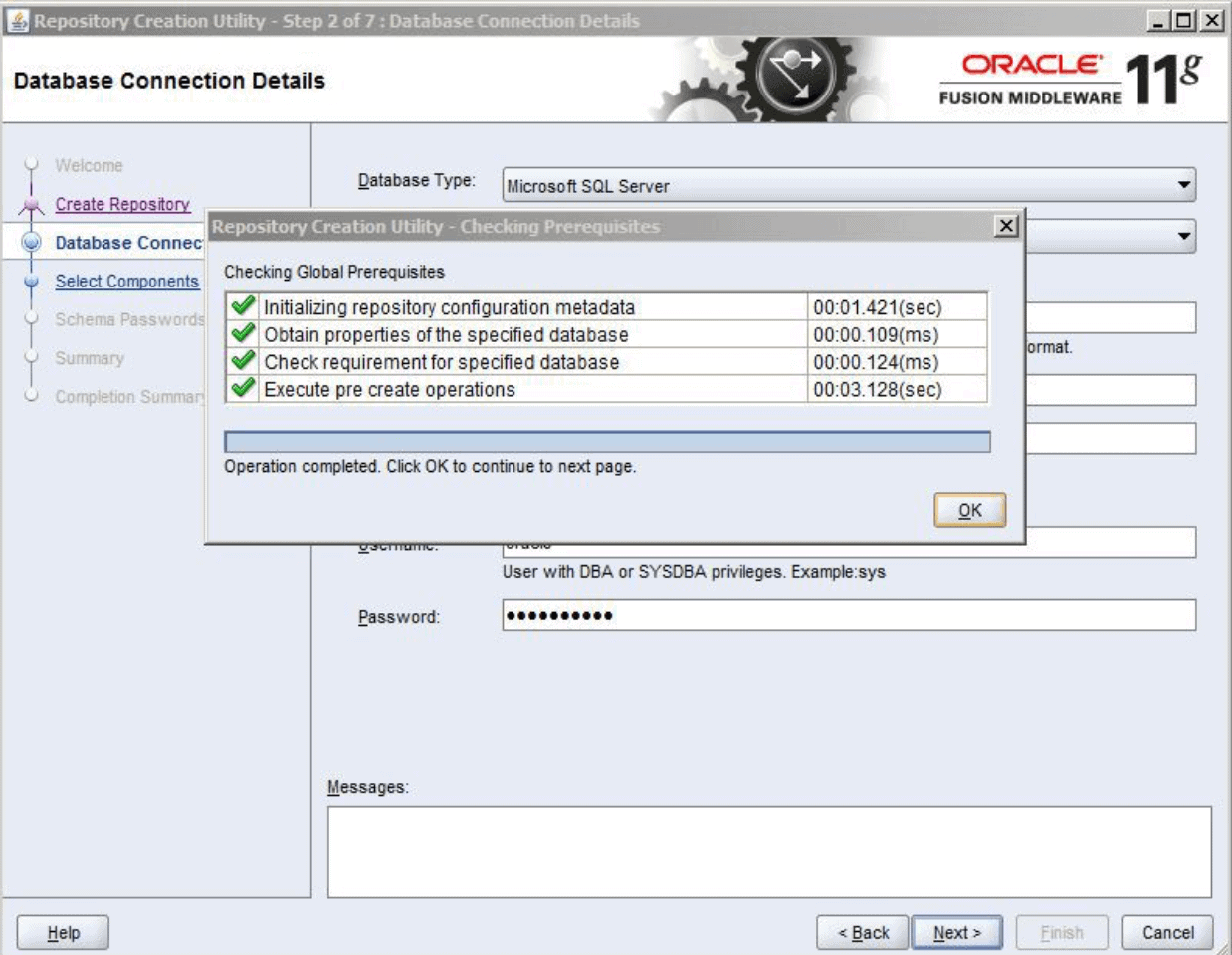 Once the RCU has successfully installed required schemas, it should look like following screenshots. 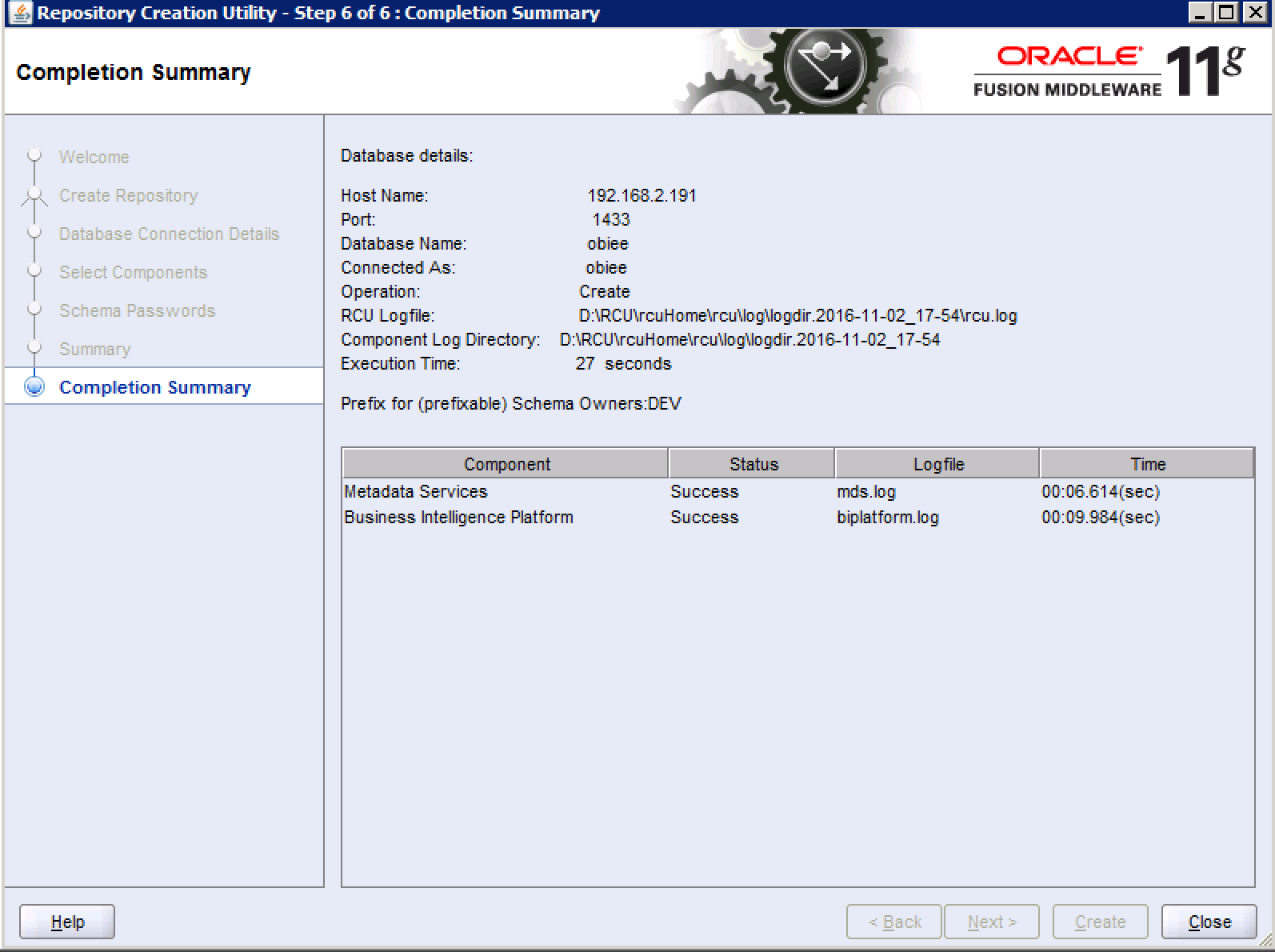 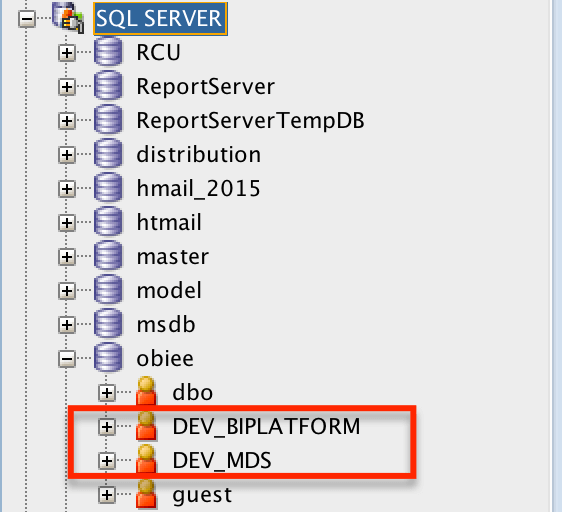 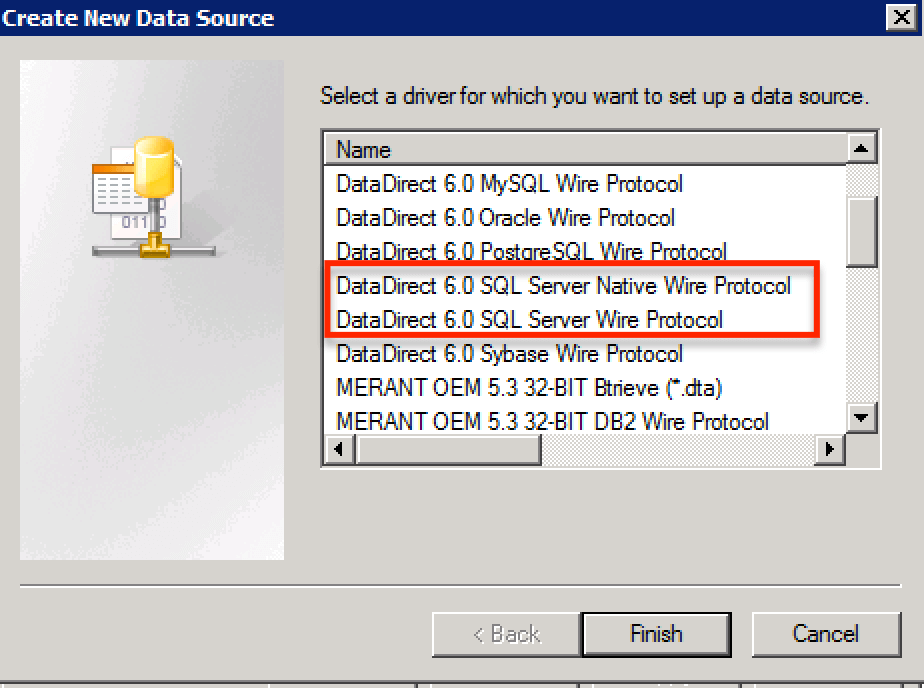 There is another kind of connection available via JDBC but only available from OBIEE 12c and not fully documented and supported by Oracle.

Connection to OBIEE 11g/12c is fairly straightforward too – the SQL server 2008 R2 driver (as shown in the above snapshot), which comes with OBIEE, works fine, with the connection process involve creating an Open Database Connectivity 2.0/3.5 (ODBC) Data Source Name (DSN) to SQL server database and then importing all the tables into the Repository 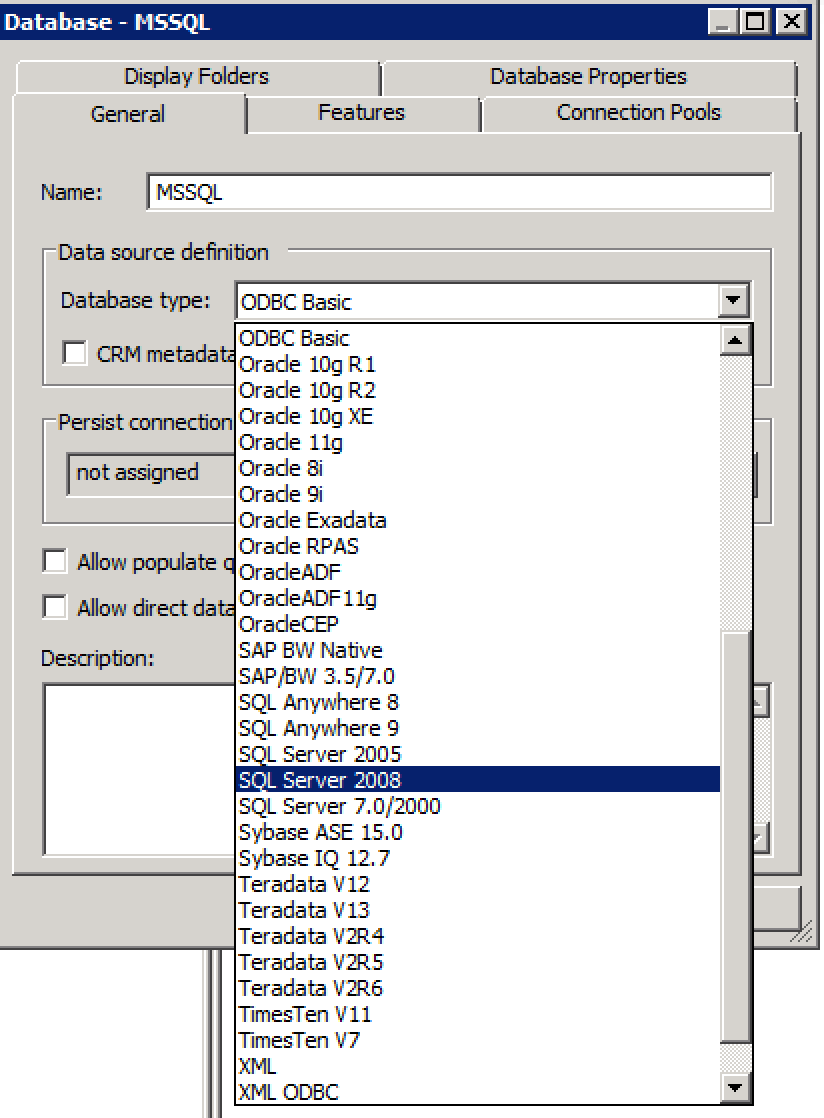 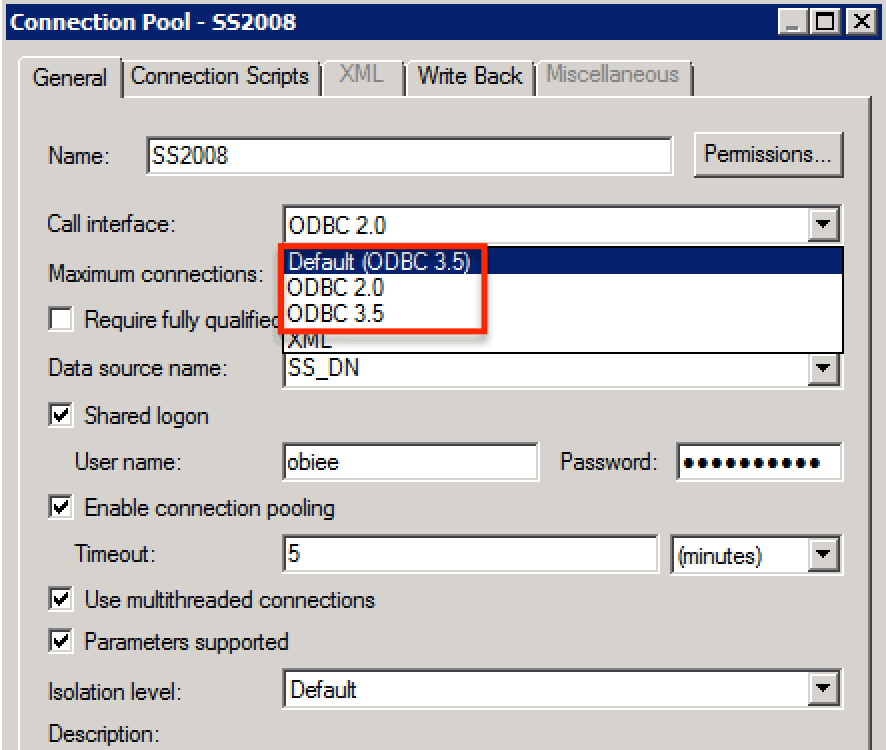 For time being we will ignore Extract Transform and Load (ETL) element, and will focus on the cost of SQL Server Database setup on three above environments.

So SQL Server 2008 R2 will probably appeal to the customers who are looking for Oracle Business Intelligence (OBIEE) 11g as a reporting tool with a cheaper underlying Database.

OBIEE Connection’s performance to SQL Server 2008 R2 worked fine with Sample data and three concurrent users, but obviously you would need to test more rigorously with a workload closer to your setting. 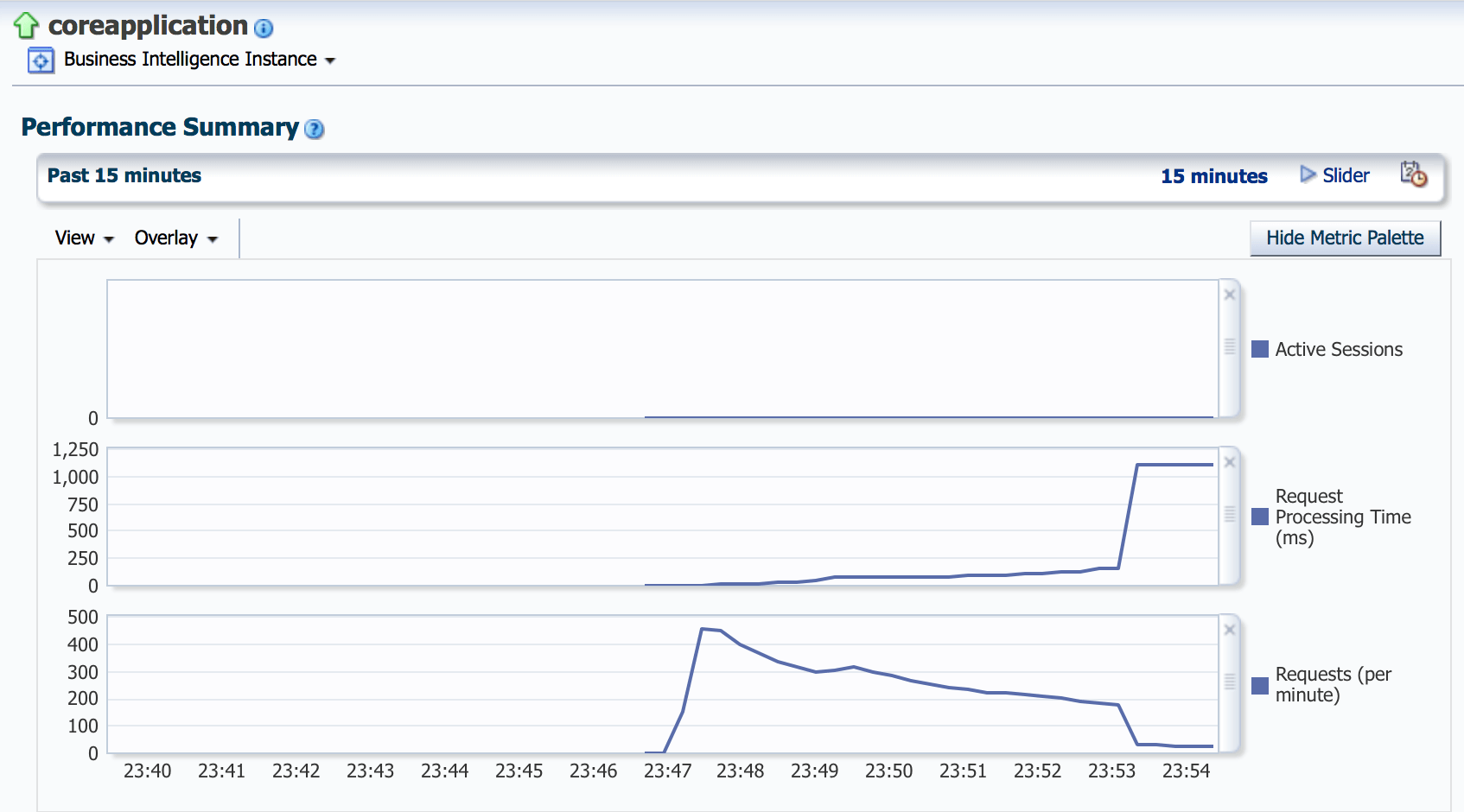 So far we have been discussing the cost of running OBIEE more or less “on premise”. However there are a variety of Cloud (PaaS, IaaS, SaaS) options available to integrate with OBIEE. The advantages of using the Cloud-based options are that there is no local installation, administration is simpler, and you have no hardware cost: Some services would also result in less on-going cost. In simple terms, the structure of cloud architecture could be similar to this: 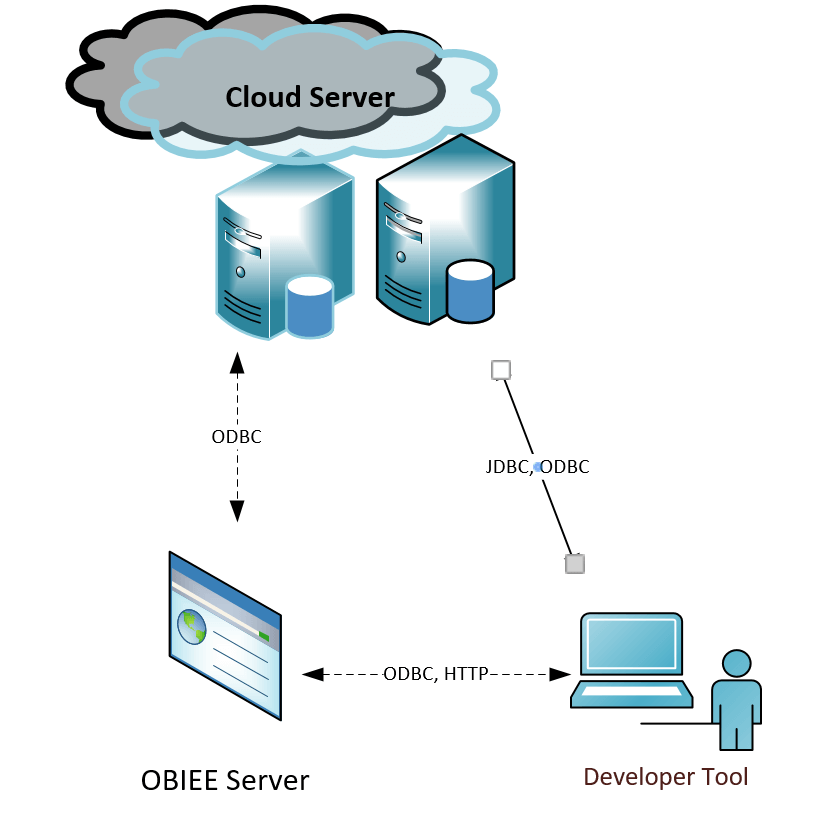 In this case, instead of charging for software and support upfront you are charged monthly or hourly based on instance size. Extreme performance Package will cost $5.28/hr or $46k/year, or $138k/year for the three servers, which is still lower then the Oracle “on premise” maintenance cost.

In most cases, cloud services will appeal to the most of the companies where there is temporary BI requirement, budget constraints, or where it is important to avoid the initial cost of hardware.

Connecting to cloud based database is same as connecting to regular “on premise” database via SQL Developer/Toad for Oracle or in Repository – the direct ODBC driver that comes with OBIEE works fine with most of the known cloud services. 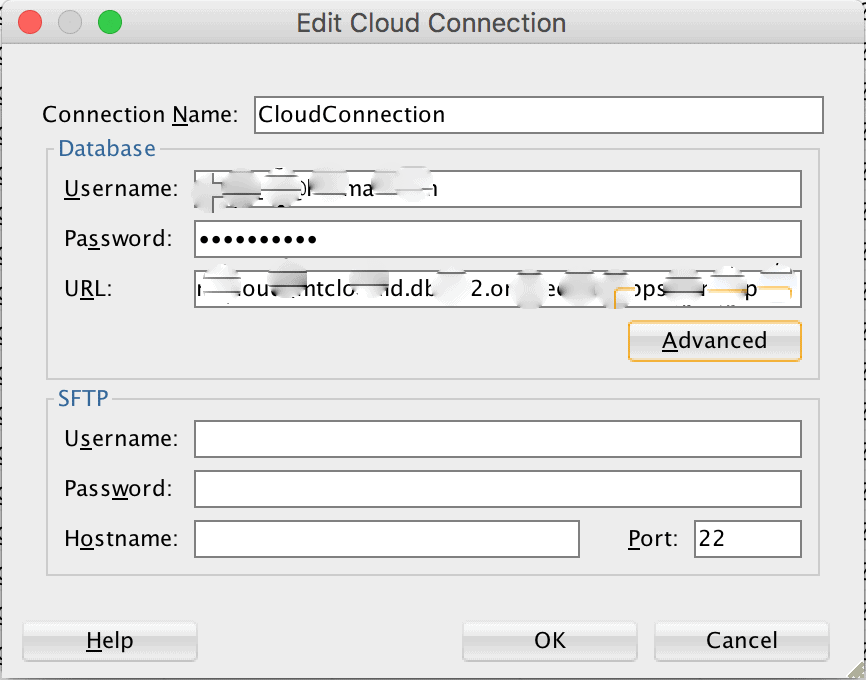 With all the comparisons in hand, what should we conclude? Oracle Business Intelligence Enterprise Edition (OBIEE) 10g+ seems to allow us to design database systems that fit the company’s budget and its requirement for integrating heterogeneous systems. Obviously, Oracle cannot support non-Oracle products but it is more of a problem that support for SQL Server is so meagre, bearing in mind that MS SQL support for 2008R2 will finish in March 2019. Hopefully, by then Oracle will have gotten around to certifying more recent versions of SQL Server!

Looking to the future, it is good to see that OBIEE integrates with a variety of Cloud databases via PaaS, IaaS and SaaS. OBIEE also integrates with Business Intelligence Cloud Services (BICS) There are two major advantages of moving to BICS:

Now as a disclaimer, I am mainly an Oracle person and I cannot speak in depth about the Microsoft product, but it could be that you would lose a feature that you already rely on if you switch to a different RDBMS: This might be something like Parallel query, bit map indexation or cost-based optimization. However Oracle and SQL server are generally comparable in their features, and many Small Medium Enterprise (SME) companies may not require to use all the unique features of Oracle.

In the third article of this series, Sanil Mhatre demonstrates how to perform a sentiment analysis using R including generating a word cloud, word associations, sentiment scores, and emotion classification. … Read more