The Walrus and the Manager

Why do Phil's eyes water whenever he hears the poem 'The Walrus and the Carpenter'? Is it the voice of his conscience or memories of struggles selling software services to large companies? Why does he identify so strongly with the eldest oyster? 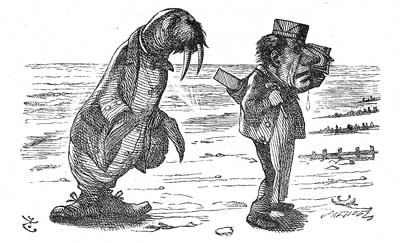 I once worked for an international company who did a study to find out why so many of its suppliers had disappeared. The subsequent report made disturbing reading. The report revealed what could best be described as the “Walrus and the Carpenter” effect. Even today I can’t read Lewis Carroll’s poem, The Walrus and the Carpenter, without a lump in the throat.

Much of the work of a manager in a manufacturing company is to create and foster relationships with suppliers. It is true of any IT departments too, where many applications and services are bought in, rather than created in-house. Who’d want to write and maintain their own payroll package, for example? However, in such a relationship, there is a lot of work to do to make sure both sides obtain maximum benefit. If you get it wrong, it can cause real suffering.

The poem introduces the walrus and the carpenter walking along the beach at night. To me, the Walrus represents the complacent corporate organisation. The lethargy, and the layers of blubber, speak volumes. The Carpenter is obviously a project manager.

The Walrus and the Carpenter

Were walking close at hand;

Such quantities of sand:

“If this were only cleared away,”

They said, “it would be grand!”

“If seven maids with seven mops

Swept it for half a year.

Do you suppose,” the Walrus said,

“That they could get it clear?”

“I doubt it,” said the Carpenter,

And shed a bitter tear.

Note the subtlety of the dialogue; the naÃ¯ve trust of corporate reasoning that projects that are ‘slipping their dates’ just need additional headcount to ensure that they come in on time, and the wise riposte of the Carpenter. In IT, such a practice usually leads to tears.

I learned very early on in business that it is safest to enter into commercial relationships only with companies of a similar size to your own. This is why IT salesmen who sell applications and services to corporates always trot out their revenues and projected growth at the start of their PowerPoint Presentations. An experienced manager will be nervous of buying from a small company – ‘The Oyster’: But not these two characters, it seems.

“O Oysters, come and walk with us!”

The Walrus did beseech.

“A pleasant walk, a pleasant talk,

Along the briny beach:

We cannot do with more than four,

To give a hand to each.”

The corporate is, suspiciously, encouraging the ‘oysters’. For a small supplier, the idea of forming a relationship with the IT department of a large company is beguiling. Once you are in place, with a good maintenance contract, the future looks rosy. Many IT managers in large businesses will encourage this idea of “synergistic” business opportunities with smaller partners, as they know that it will generally give them the “upper hand” in most of their dealings. However, the oysters should be very wary of placing their fortunes and future completely at the mercy of the company. Suddenly we meet the old ‘Phil Factor’ oyster. He has already seen the consequences.

The eldest Oyster looked at him,

But never a word he said:

The eldest Oyster winked his eye,

And shook his heavy head–

Meaning to say he did not choose

Tie up the resources of a growing company in a commercial relationship with a single large one? Get distracted from developing other commercial links by the promise of easy money from this single source? What happens when the contract is renegotiated, and you’ve let other revenues atrophy? The oyster will want to neglect the natural predatory instincts of the walrus, but he does so at his peril. Sadly, the temptation is just too great for the less experienced.

But four young Oysters hurried up,

All eager for the treat:

Their coats were brushed, their faces washed,

Their shoes were clean and neat–

And this was odd, because, you know,

They hadn’t any feet.

Out of their natural element they go, beguiled by the false expectations of doing business with a large company, and deaf to the warnings of the old oyster, Uncle Phil. From the description, it is the sales reps who make the running. Wiser counsels are usually forgotten in the stampede for corporate sales.

The problem is that small companies often require a large investment just to survive the ups and downs of negotiation over a contract, which can be protracted. They generally don’t have the funds readily available and so take out loans in expectation of the revenue streams to come. Even if they succeed, and win a contract, they often have to expand just to service that contract.

Four other Oysters followed them,

And yet another four;

And thick and fast they came at last,

All hopping through the frothy waves,

And scrambling to the shore.

And how the talking can go on…and on. Meeting after meeting, with always the promise that this last presentation will close the deal. Then the manager is changed and you have to start again.

“The time has come,” the Walrus said,

“To talk of many things:

And why the sea is boiling hot–

And whether pigs have wings.” 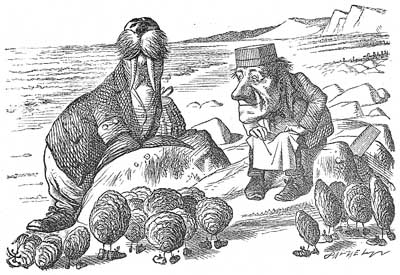 ‘The time has come to talk of many things.’

The weeks turn to months. Then come the changes in requirements, the changes in scope and the delays. Sometimes these delays are for no better reason than the manager has lost the file or is distracted by things that seem more important at the time. I knew a sad senior manager who called in salesmen from potential suppliers for meetings, merely because they were the only people who were ever pleasant to him.

It is fine for a medium sized or large business to take on a large account. The resources are there, they have people specially trained to do account management. The small businesses, on the other hand, are forced by their size to field people without the training for the ordeal.

“But wait a bit,” the Oysters cried,

“Before we have our chat;

For some of us are out of breath,

“No hurry!” said the Carpenter.

They thanked him much for that.

And then there is the awful moment when it dawns on an over-extended small company that a synergistic relationship was never on the cards. The large company has beguiled them into doing a free business analysis, received a great deal of specialised information, and will often have got them to write all the documentation for them.

A loaf of bread,” the Walrus said,

“Is what we chiefly need:

Pepper and vinegar besides

We can begin to feed.”

“But not on us!” the Oysters cried,

“After such kindness, that would be

A dismal thing to do!”

“The night is fine,” the Walrus said.

“Do you admire the view?

Eventually, the banks who have loaned the money to the small company realise that a deal isn’t on the cards and call in the loan. The company will have put so much energy into the deal that it will make them very vulnerable. Even if the deal goes through, the Oyster suddenly realises the dangers of shedding all those fixed assets that have been put in place purely for the project, if the deal is terminated or renegotiated.

“I weep for you,” the Walrus said:

With sobs and tears he sorted out

Those of the largest size,

Before his streaming eyes.

“You’ve had a pleasant run!

Shall we be trotting home again?’

But answer came there none–

And this was scarcely odd, because

They’d eaten every one. 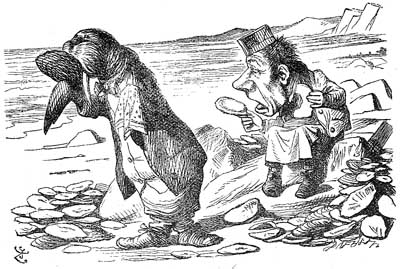 ‘You’ve had a pleasant run’

There was, certainly a great deal of hand-wringing amongst the senior management of the company when they discovered why ‘answer came there none’ from their suppliers. The company was suffering for the sins of its own management, who had exploited their positions. A great deal of regret was expressed. Practices were tightened up; even the one of using one’s suppliers as unofficial banks by being late in payments was banned.

The carpenter seems surprised at the demise of the oysters. Indeed, many project managers in government or large corporate have no idea of the damage their delays and dithering can do to a smaller company. The walrus, however has deliberately planned their destruction even whilst protesting his regret and compassion. It isn’t entirely a mistake.

Oysters may be eager to join the big boys at the dinner table but responsible organizations will only dine with those of a similar size to themselves. On the seashore of commercial life, it is harder, after all, to absent-mindedly eat a walrus than an oyster.

Phil Factor’s first Ebook ‘Confessions of an IT Manager’ is a free download to anyone who registers for Joel Spolsky’s, and Neil Davidson’s, Business Of Software 2008 conference. This Conference should be of interest to anyone who is, or has been, in the business of software, whether they are programmers, product managers, development managers, marketeers and project managers. It will be held in Boston MA on September 3rd-4th. Neil’s Blog will keep you up to date.