Windows Server 2008 R2 SP1 has introduced what Microsoft calls 'Dynamic Memory'.The start-up RAM VM memory assigned to guest virtual machines can be allowed to vary according to demand based on the workload of applications running inside. Fine, but it requires careful setting up for certain applications. Jaap explains.

In Windows Server 2008 and Windows Server 2008 R2 assigning memory to virtual machines is a static process. When you assign 4 GB to a virtual machine it uses these 4 GB, no more, no less. When not all of this memory is used than it’s bad luck. Once assigned it cannot be used for other purposes. So, when you have a Hyper-V host with 32GB of memory, you can create 15 virtual machines each configured with 2 GB of memory. The last 2 GB will be used by the parent partition itself.

Some people think VMware’s and Microsoft’s approaches to dynamic memory is exactly the same. In this article I explain both the similarities and the differences.

The challenge here is designing the Virtual Machines for the proper amount of memory. For There are plenty of guidelines, both from 3rd party software vendors as well as independent consultants. But all parties remain on the safe side; rather recommending too much memory than too little, because the latter could cause performance issues.

Windows Server 2008 R2 SP1 solves this issue by introducing dynamic memory. With dynamic memory a minimum amount of memory is assigned to a VM, but when the VM needs more memory the parent partition can assign more memory to the VM. Memory can grow while the VM is running, so it’s a fully dynamic solution. On the other hand, if the VM doesn’t need the amount of memory anymore, the parent partition can reclaim a portion of that memory from the VM and use it for other VM’s. So it really is a dynamic solution.

Note. When creating a VM the memory is set to ‘static’ by default, so you have to manually turn on dynamic memory, you cannot do this while the VM is running.

An addition to this, the virtual machines need to be configured with the integration components of the parent partition, i.e. Windows Server 2008 R2 SP1. Unfortunately this is not true for all versions of Windows running in the VM. When running Windows Server 2008 Standard Edition in a VM the system needs a full installation of Service Pack 1. 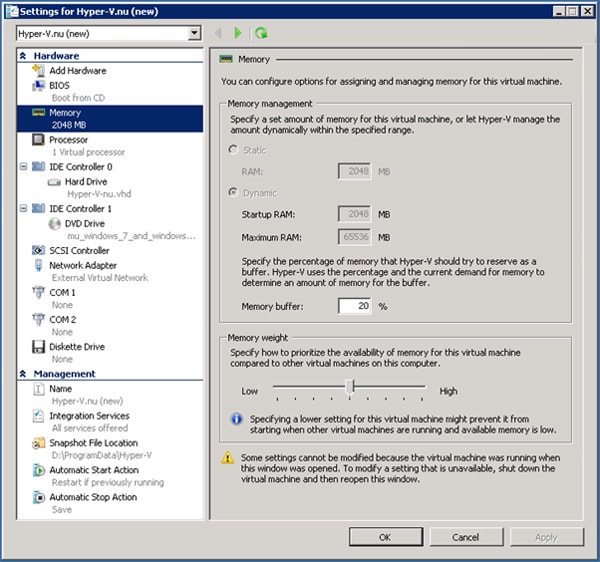 Memory weight is another setting used by Hyper-V for determining which virtual machine is more important than others when it comes to reassigning memory between virtual machines.

In this example the Hyper-V.nu Virtual Machine has 2048MB of memory assigned as “startup RAM” but only 1085MB is actually used. It should be possible to lower the amount of “startup RAM” on this particular VM.

The amount of memory that is requested by the virtual machine depends of the usage profile. We all know that Exchange Server is always in urgent need of memory and so is SQL Server. But running a webserver or a file server is a different story. I’ll get back to the (supported) scenario’s later in this article.

Dynamic memory is an interaction between the parent partition and the virtual machine. This is achieved through the use of the Integration Components. Integration Components in general consist of a server part, the Virtual Service Provider (VSP) and a client part, the Virtual Service Client (VSC). The latter is the one running in the virtual machine. The VSP and the VSC are connected via the VMBus structure. The VMBus is an in-memory bus structure, allowing the parent partition and virtual machine to communicate at very high speeds.

With SP1, new components are added to the VSP and the VSC to allow the use of dynamic memory. The VSC reports the memory requirements of the virtual machine to the VSP in the parent partition. The Memory Balancer coordinates all requests from all virtual machines and allocates memory to, or reclaims memory from the individual virtual machines.

When the parent partition needs to reclaim memory, a mechanism called ballooning starts to reclaim these memory pages. When there are no free pages available inside the virtual machine, it starts paging to disk to reclaim memory to the parent partition. Basically this continues until the startup memory limit is reached. Setting this limit too low for virtual machines will result in paging and therefore in a performance decrease. 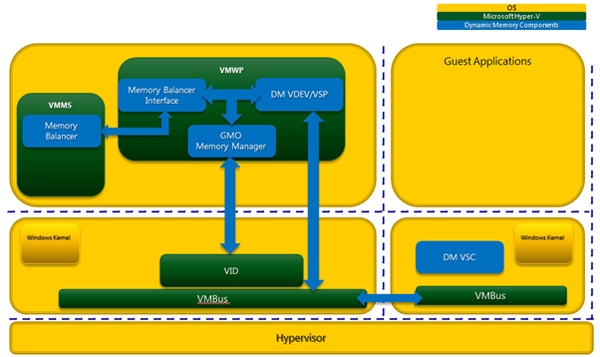 Dynamic memory is often referred to as “Microsoft’s answer to VMware’s overcommit” but by now it should be clear that this is not the case. Memory can only be assigned once to virtual machines, and when the limit is reached additional virtual machines fail to start. Of course it is still possible to set the startup memory limit way too low, but you don’t have to be a guru to see that this approach doesn’t work.

Microsoft also doesn’t use memory page sharing between virtual machines like VMware does. Microsoft doesn’t do this from a security perspective, but also the added value using page sharing is very limited when using large memory blocks like Hyper-V does. Page sharing works absolutely fine as long as ‘normal’ 4KB memory pages are used, but when large memory blocks are used, the efficiency decreases rapidly since the parent partition has to find identical 2MB memory blocks and calculate its hash value. More information on this can be found on the VMware site: http://communities.vmware.com/message/1262016#1262016

0 19
Having gotten us up and running with the basics of Office365, Jaap Wesselius now dives deeper, walking us through the setup process for Lync Online, the Office365 component which provides cloud-based Unified Communications. He even shows us how to integrate it with our on-premises systems in quick, easy steps.… Read more
0 19

0 31
A Hyper-V replica installation provides rapid disaster-recovery by asynchronously replicating a VM running at a primary site to a replica site. Know how to prepare for something to go wrong at the Primary Server/Site? In this article Nirmal Sharma presents the Replication options for a Replica Virtual Machine with a focus on Hyper-V Failover. … Read more
0 31