Rick Rainey shows how you can incorporate checking group membership in Azure Active Directory Claims in the fourth edition of his series on JustAzure.

In the last post I showed how you can use the Active Directory Authentication Library (ADAL) to build a native client application that calls the CloudAlloc.WebAPI introduced in earlier posts of this series. As part of that post, I demonstrated how the Web API could be exposed to other applications using ouath2Permissions that I defined in the manifest which enabled me to assign these permissions to my native client application as shown in Figure 1.

Being able to assign read and write permissions in this way provided an easy and useful way to control an application’s ability to invoke various operations using the claims that were issued by Azure Active Directory for an authenticated user. However, the level of granularity for which authorization decisions can be made in the application code is pretty coarse with this approach. In my example, it was the simple read and write permissions I defined and if the native client application was configured to allow write permissions, then any authenticated user would be able to invoke such operations. While that may be sufficient for some applications, others may require additional information about the user before making such authorization decisions. For example, you may want to restrict write operations to users in a specific security group. As you can see in Figure 2, the claims provided by Azure Active Directory for our authenticated user John Doe just don’t provide that level of detail about the user (yet). Other than some various identifier claims about John Doe, we’re currently limited to the values in the scope claim to make authorization decisions.

Figure 2: Claims at the application level

A common need for many applications is the ability to make authorization decisions based on a user’s membership in a specific security group (or groups). In this post I’m going to show how you can take advantage of some recently released features of Azure Active Directory to do just that.

Just a few days after the previous blog post in this series, the Azure Active Directory team announced the preview release of two new features: group claims and application roles. Before this release, you would have had to use the Azure AD Graph API to determine a user’s membership in a group. Now, you can just look for it in the Claims collection for the authenticated user provided you enable the group claims feature for your application in Azure AD. Let’s see how this would work for the application we’ve been talking about and only allow users to invoke the POST method if they are in the “Dev/Test” security group.

Enabling the group claims feature currently requires that you update the manifest for the application in Azure AD. This is exactly the same process I showed you in the last post where I set the oauth2Permissions for the application.

The application manifest is just a JSON file that you can edit with the simplest of editors (ie: notepad.exe). By the way, if you’re curious what the GUID in the filename is about when you download the manifest, it is the Client ID that was assigned to the application when it was registered in Azure AD. Scrolling down the manifest file I will find the groupMembershipClaims property which will be set to null as shown here in Figure 4.

I’m going to change this value to SecurityGroup and then save the changes as shown in Figure 5.

All that remains now is to upload the modified manifest file which I did using the MANAGE MANIFEST button.

With that change in place, I will now start getting group claims in the token for users of my application. As mentioned above, I’m interested in checking for the user’s existence in the Dev/Test security group. So, before I show you the code changes needed to do this, let’s review my security groups and where our John Doe user lands in these groups.

Locate the Object ID for the Dev/Test Security Group 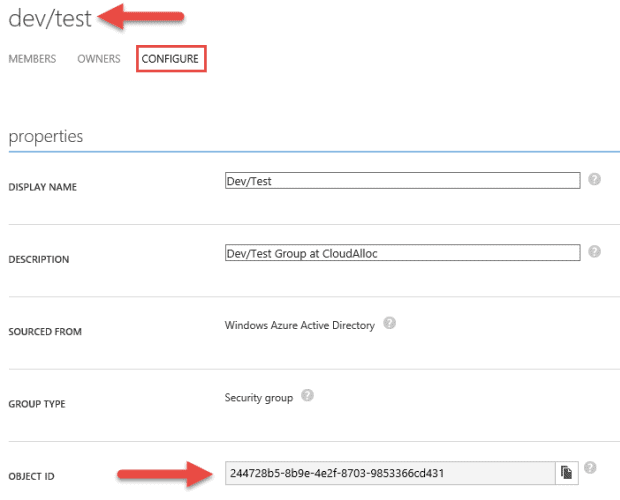 Figure 6: Getting the ObjectID for a Security Group

Now that I have the Object ID for the Dev/Test security group I am ready to make the necessary code changes.

Update the POST Method to look for Dev/Test Group Claim

Note: As I pointed out in my last post, it is a good idea to organize code like this into a custom AuthorizeAttribute class or some other common class so that your application logic and authorization logic are not mixed together. I’m intentionally leaving that as an exercise to you the reader though.

That’s all there is to it! Now, let’s observe the results of these changes by examining the claims collection for the authenticated user (John Doe).

I ran the application under the debugger and set a breakpoint in the POST method so I could show you the new group claims in the claims collection. As shown here in Figure 7, you can see there are two groups claims present for John Doe.

The value for the first groups claim should look familiar – it is the Object ID for the Dev/Test group I discussed earlier. The second one happens to be a “Developer” security group in my directory for which John Doe is a member. Figure 8 shows the membership for both security groups. 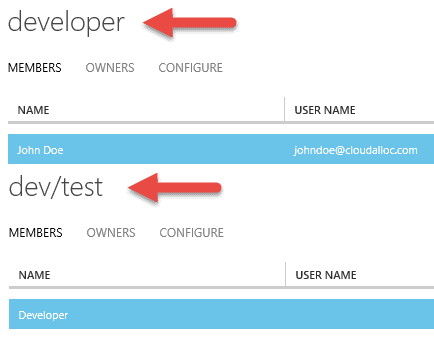 As you can imagine, in a real world production environment a user is likely to be a member of many different security groups. When you enable the group claims feature the tokens issued for users will contain the group claims for all of these groups which could greatly increase the size of the token. Therefore, there are limits on the number of group claims that Azure AD will place in a token as follows:

Currently there is not a way to filter the group claims that Azure AD places in a token. So, if users in your directory could potentially exceed these limits you will need a different solution.

For the scenario mentioned above, the Azure AD Graph API could be used to look up the security groups a user belongs to or to check if a user is in a specific security group. The latter is particularly applicable in our scenario here and could be achieved using the IsMemberOf function. To execute this query you need only the Object ID of the user and the Object ID of the security group. The query will execute in Azure AD (server side) and simply return true or false. Prior to the release of the group claims feature in Azure AD discussed in this post, this was the only way to check group membership for a user. In situations where the number of groups a user is in could potentially exceed the limits above, it is still available to you. In the next post I’ll talk more about the Azure AD Graph API.

In this post I showed how to take advantage of the new Azure Active Directory group claims feature and apply it to our scenario to determine a user’s membership in a particular security group. I also discussed the group claims limit as it applies to JWT and SAML tokens issued by Azure AD and how you can fall back on the Azure AD Graph API’s IsMemberOf function to query the directory and determine the same.

In the next post, I will introduce you to the Azure AD Graph API and some handy client libraries you can use to access the graph in Azure AD.

Rick Rainey is the Principal Program Manager in the Azure Customer Advisory Team.

Prior to starting CloudAlloc, Rick worked at Microsoft for 12 years. While at Microsoft, he worked closely with Microsoft Premier customers, ISV’s, and Microsoft Engineering to onboard customers to the Azure platform. He has a deep developer background using Microsoft Developer tools and technologies with emphasis on Azure Websites, Identity, and Azure Active Directory.

Rick is a Microsoft Azure Insider and Advisor, Microsoft Certified Trainer (MCT), and active contributor to the technical community through his blog at http://rickrainey.com where he writes extensively about Microsoft Azure. You can follow Rick on Twitter @RickRaineyTx or connect with him on Linked-In at www.linkedin.com/in/rickrain/.

View all articles by Rick Rainey