Sandrino continues his multi-part series on Azure Cloud Services. In this article he covers how to customize your VM and the lifecycle a VM goes through.

By now you should start to see the advantages of deploying your application to a Platform-as-a-Service environment like Cloud Services. You just take the code, upload it and the rest (like setting up the virtual machines) is done for you. But depending on the complexity of your project this might not be enough. You might need to customize the Web/Worker Role Instance before it starts. For example you may need to configure IIS, install an IIS extension using the Web Platform Installer, install a monitoring agent, join a domain, etc.

In a traditional environment you would simply start a Remote Desktop connection or execute some Remote PowerShell scripts to customize your environment, but that won’t work here. Remember that we’re working with a “disposable infrastructure”. Machines can be added or removed at any time, we might need to delete a deployment (which also removes the instances within that deployment) and then redeploy it. Or if something goes wrong and a few machines become unhealthy the Fabric Controller might even need to deploy the application to other machines. Oh, and remember that the changes made to our instances are not even persisted.

Luckily the Cloud Services platform allows you to control the lifetime of an instance: you’re able to do something when the instance starts, when it’s running and even when before the instance is being shut down. If you’re doing work on an instance (maybe reconfiguring it or updating something) you can even communicate with the load balancer to let it know that the instance is busy.

Tapping into the lifetime of the instances means that our customizations, whatever they might be, are included in the Service Package and are part of the deployment, allowing us to make sure that every instance is configured in exactly the same way.

When creating Web and Worker Role projects you might have noticed a file being added to your project: WebRole.cs or WorkerRole.cs. These classes inherit from the RoleEntryPoint class and runs in a dedicated process (WaIISHost.exe and WaWorkerHost.exe). During the lifecycle of the instance the Fabric Controller will call 3 different methods on the RoleEntryPoint:

Figure 1 shows an example of a Worker Role which logs every call to OnStart/Run/OnStop to table storage (using the Azure SDK version 2.5).

After running this code in the emulator we’ll be able to follow the lifecycle of the Role Instance as you can see in Figure 2.

The OnStart seems like the perfect way to configure your Instance, and in many scenarios it is. But there are times where you’ll need to run a script or a process and doing this from within your code might not be the easiest way to do it.

Before the OnStart method is called you’re able to run “Startup Tasks”, which can be scripts or processes you can execute to configure your Instance. Depending on what your task will be doing you’ll have different execution contexts and types to choose from.

The execution context defines if your task runs with administrator privileges or not:

Anything you would need to do to configure IIS or Windows will typically require you to use an Elevated execution context.

There are also different Startup Task types available allowing you to choose when they should be executed and how they impact the way the Instances starts and stops:

There is one special requirement when it comes to running scripts as Startup Tasks. You’ll need to save the script without encoding in the ANSI format. Using Visual Studio this can do this using the Advanced Save Options (Figure 3).

Besides the execution context and the type you can also use environment variables in your Startup Tasks. These can be values you define in the Service Definition file or XPath queries against the Web/Worker Role Schema. These values can be used to find the path to a local resource in which you could store some log files or to verify if you’re running in the emulator or not.

Figure 4 shows the definition of a Startup Task with a custom environment variable I’m using to define the filename of the log file and the XPath queries to find the path to a local resource and some additional information about my instance.

The example in figure 6 shows a pretty complete Startup Task: everything is logged to a local resource, the script is only executed once, an external PowerShell script is executed (for which the output is also logged) and we’ve added some error handling to the script.

Before using startup tasks in your services you might want to take a look at the following whitepaper on MSDN: Best Practices for Startup Tasks.

Figure 7 shows a high level overview of the Role Lifecycle (a detailed overview can be found on Kevin Williamson’s blog). The gray blocks in the figure only apply to Web Roles. 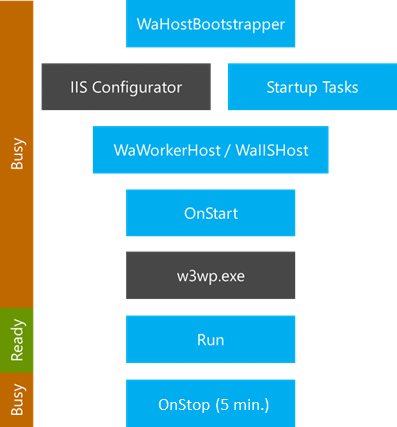 One word of caution when configuring IIS through startup tasks is the possible race condition with the IIS Configurator (which will configure IIS properly). You might notice issues with your Startup Tasks because IIS might not have been configured yet or the IIS Configurator is still busy. There are different approaches to solve this, but the easiest way to do so is by running your IIS customizations from the OnStart method, where you’ll be sure that IIS Configurator has already finished.

By using the ServerManager class and setting the execution context of your Role to Elevated you can do pretty much anything with IIS from within the OnStart method. Part 2 of this series shows a short example in Figure 10 where we changed the Idle Timeout of the application pools to 2 hours.

Throughout this series we’ve talked about WebRole.cs and WorkerRole.cs files and the OnStart/Run/OnStop methods that come from the base RoleEntryPoint class. The packaging process will create file (__entrypoint.txt) in the package that points to the assembly which contains the entry point. This is the default behavior.

But the Service Definition file also allows you to customize this by specifying a custom entry point:

The way infrastructure should be

Even though the Web and Worker Role instances are not managed by us, we still have lots of flexibility to configure the machines the way we want it. Since nothing is persisted we’re forced to script everything, we can’t rely on changes made through Remote Desktop. And this is a good thing! Gone are the days that only a few people in the team know how to properly deploy and configure the application. Deployment is handled by the Azure platform and the custom configuration can be found in Startup Task or the OnStart method.

If we scale out or if the Fabric Controller needs to deploy new instances to replace unhealthy instances the new instances will be configured in exactly the same way as the instances that are already running. There’s no room for error if we script everything.

And as always, the samples we covered in this article are available on GitHub: https://github.com/justazure/JustAzure.CloudServices , or you can download it from the link below.

Our instances are now ready, so in the next part of this series we’ll cover the deployment, debugging and monitoring aspect of Cloud Services. Don’t miss it!

You’ll find him on StackOverflow or on his blog: http://fabriccontroller.net.

How Essential Are Azure Policies

0 1
Policies in Azure are like Wally. They are there, but not obvious to find, hidden in the middle of many services, waiting for someone recognize their importance. Why do we need Policies Billing The billing control in Azure has by itself many different reasons to enforce policies. You, with your single Azure subscription, may think … Read more
0 1

0 1
Log Analytics is a basic tool for the entire Azure environment, I wrote about it before. The possibility to access log analytics data from a tool for analysis, such as Power BI, only increases its importance. There are some options to make this access and we expect these options to improve very soon. Using Notebooks … Read more
0 1

0 14
Matt Milner provides a great Azure BizTalk Services Introduction for BizTalk Developers in this first of a series of articles.… Read more
0 14