Docker technology is Linux-based. Although the concept of a container isn't new, the common toolset, packaging model and deployment mechanism of Docker has made the use of containers far simpler. As a quick introduction to the technology for Windows users, Krishna shows, step by step, how to set up, and configure a Docker Daemon in Azure within a VM, and install a MySQL image in a container from the Docker Repository.

In this article, I’ll first touch on why containers are important, and how they can be a better solution for some software development tasks than using virtual machines. I’ll then explain some of the jargon around Docker. With that out of the way, I’ll give you a step-by-step guide to setting up, and configuring a Docker Daemon in Azure within a VM, using Docker VM Extensions in Azure. Finally, I’ll show how to manage a functional MySQL Database inside a Docker container.

Why Containers are important for Software Development

Before the advent of Virtual machines and containers, developers generally preferred to develop client-server based applications on their own systems. Then they would test them on staging servers before deploying them on the production servers. This process has been rendered more complex by the increasing intricacies of the steps that are involved in building, configuring, and testing the application. Before software can be shipped, there are also such issues as the hardware cost, dependences and portability.

To avoid hardware provisioning becoming a problem during the software development cycle, increasing use is being made of virtualization. Virtualization allows several applications to be hosted concurrently, each of them using a small proportion of the physical resources that are available, on the same physical machine. Several guest machines, can be deployed on the host machines as Virtual Machines (VMs), whatever their operating system. VMs can also help to automate testing by allowing a range of test environments to be created by a script, used to run tests, and then removed. By using VMs on servers, you can make better use of existing hardware, scale them more easily, and make deployment simpler.

The hypervisor, it turns out, isn’t the most efficient way of using resources. Each virtual machine needs dedicated resources like such as CPU, Memory, Disk etc. but a majority of these resources are used by the hypervisor and the guest machine operating system itself, leaving only a minority available for use by applications.

To overcome some of the limitation of VMs, Containers have become increasingly popular. Like VMs, they can be used locally within an intranet, or in the cloud like Azure. Containers are quicker to start up, and avoid most of the the processing and storage overhead by instead using the process and file system isolation features of the Linux kernel to expose only kernel features to a container that is otherwise isolated from other processes. Containers allow developers to build applications directly on the host operation system without the need of the Hypervisor or VMs. To the application, the container seems to be a fully-isolated and independent OS. Although containerization has been a part of Linux for a long time, it is only fairly recently that, by creating a common toolset, packaging model and deployment mechanism, Docker has made it far simpler to containerize and distribute applications that can then run anywhere on any Linux host. 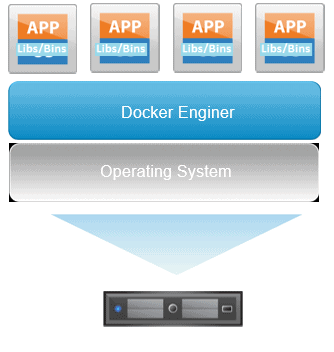 Figure 1. Docker on the host machine

Docker is not a hypervisor and does not need dedicated physical resources. The Docker Engine provides application platforms called containers which isolate code, runtime, system resource, supporting/dependent binaries and libraries to run the applications. The container itself is the small basic version of Linux OS which runs on the host machine. Containers can be installed with any necessary supporting tool, libraries, code to run the application. These containers allows developers to build applications, image, and ship to any other host machine to run independently. Because it has all the supporting tools and libraries within the image, there will be no configuration required on the new host machine.

Before we take a more practical approach, there is some jargon that I’ll need to introduce:

To get to the point of being able to install Docker containers on Windows Azure, you must have a Docker that can host containers for your applications on Azure. Before we can do that, we need to create an Azure Docker VM extension to the Azure Linux Agent. There are two ways to create Docker VM Extension using Windows Azure:

The Docker VM Extension can be easily created using the ‘Docker on Ubuntu Server’ Azure Marketplace image. This image contains Ubuntu LTSserver with Docker VM extension and latest Docker Engine pre-installed. This imaged is created and published on the Azure Marketplace by Canonical in collaboration with Microsoft. Creating Docker VM Extension using Azure market place image is quick, easy and it can be done in just few steps:

Download the latest version of Docker from http://www.docker.com and start the installation using the Docker Toolbox Setup Wizard as seen in Figures 6 and 7. 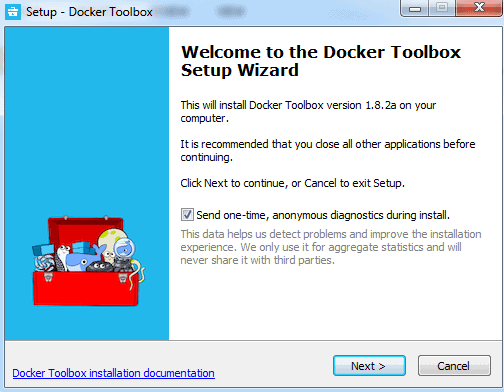 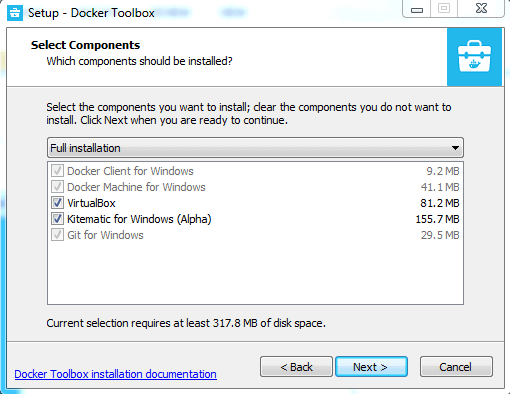 Once installed, it creates three shortcut icons on the desktop:

Oracle VM VirtualBox is a virtualization software which allows to install and manage multiple flavor of operation system. By default it is installed and configured with Docker on a Linux machine. This Docker machine can be connected and managed locally or remotely. 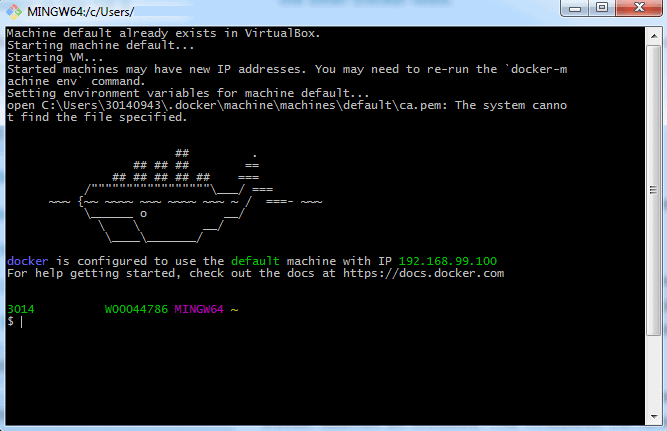 Connecting to the Azure Docker Machine and validating the installation

With the Docker Quick Start Terminal, we can  connect to the Azure Docker VM server using an SSH command in the format of: ssh username@dockervmname.cloudapp.net (for example: ssh krishna@dockervm-mcgwl02j.cloudapp.net). Once the command has been executed, it will connect to the Azure Docker machine and display the message “The authenticity of host <hostname> can’t be established”. When asked if you want to continue connecting, type yes and press enter; you will then be prompted to enter your password to authenticate. Once you have done this, it will connect to the remote machine and display the system and other necessary information. Finally, it will display the user prompt to manage the Docker machine. 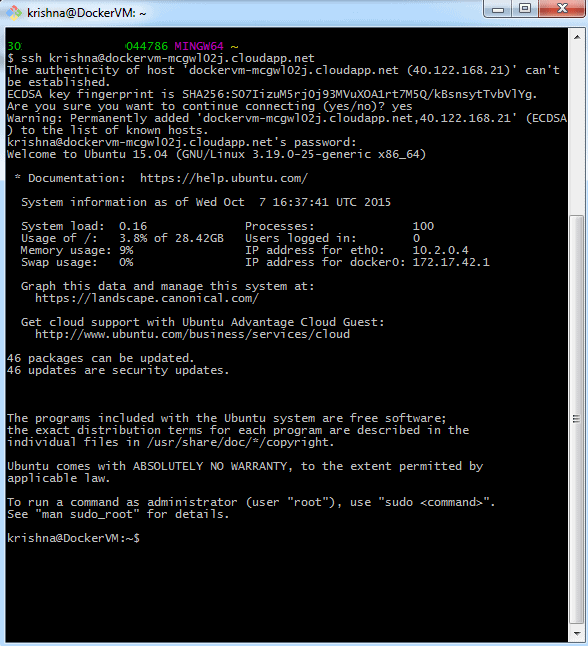 Getting Information about the Docker Machine

Once you have conntected to the new Azure Docker VM server, you can validate the target server by executing some of the commands specified below:

sudo docker run hello-world will cause Docker to try and find the hello-world image locally and when it cannot find anything, it will instead pull from the Docker hub. It then creates a new container from the image and finally runs the command. The Docker Daemon streams the output ‘Hello from Docker’ to the Docker Client which then sends it to the user terminal. 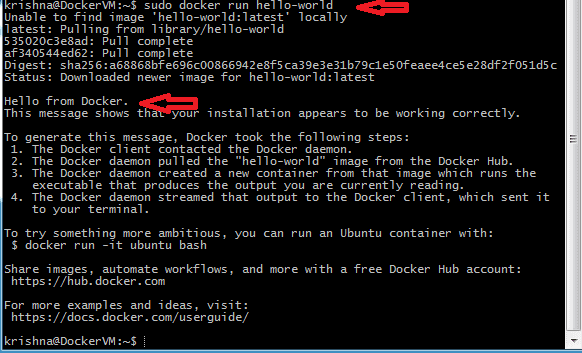 Communicating with the remote Docker Machine

Multiple users convenient tools can be used to connect to the remote Docker machine. By default, Azure Docker configures SSH on TCP port 22 to allow clients to connect and manage them remotely.

To convert the same, start PuTTygen.exe tool and then click on Load button to select the Docker private key file at %USERPROFILE%\.ssh\id_boot2docker. Then click on Save private key button to save it to the local drive. This new private key can be used by PuTTY.exe to connect to the remote Docker machine. 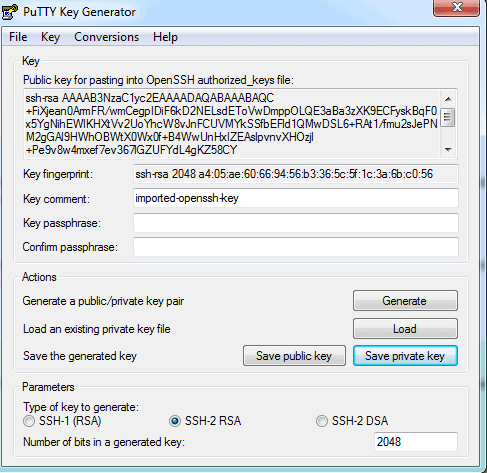 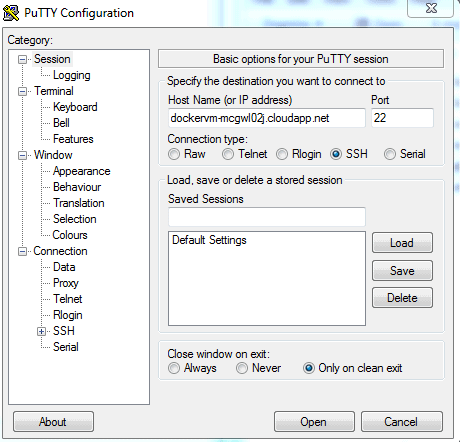 Scroll down at the category hierarchy and click on Data. Then specify the Auto-login username. 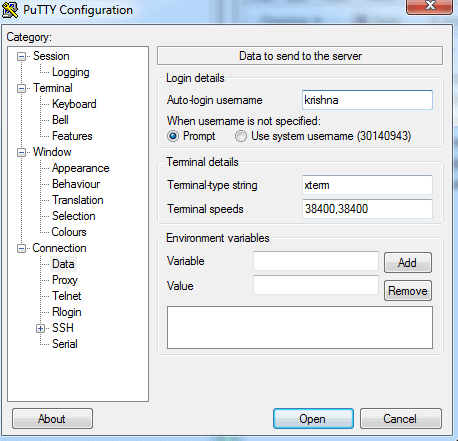 Figure 17. Configuring PuTTY with user name to send to the server when connected

Further scroll down the Category to expand SSH under connection and select Auth. Click on the Browse button under Private key file for authentication: and select the new Private Key file generated using Putty key gen. Click on the Open button to connect to the target Azure Docker VM. 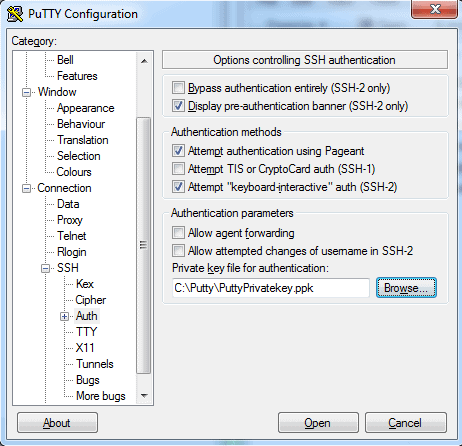 It prompts for PuTTY Security Alert, click on Yes to continue. Finally, putty connects to the Azure Docker VM and prompts for authentication. Key in the password and press Enter to connect to the remote machine. 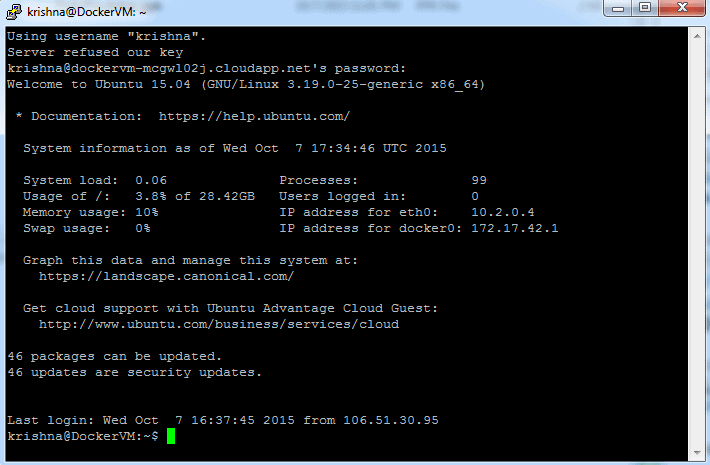 To take this to the next level, let us download and install the latest MySQL image from the Docker Repository on the Azure Docker VM and connect to it from the application. MySQL is the open source database which provides good performance, reliability and is easy to use. Docker Repository has multiple supported version of MySQL images which can be downloaded. In our scenario, let us download and install the latest version MySQL 5.7 image into the Azure Docker VM. Below are the steps to perform this.

Docker Containers offer some great features and flexibility. However, it is important to consider the security aspect to protect the application environment from possible threats. Dockers require root privileges on the host machine to run containers, hence it is necessary to make sure that only authorized persons are handling Dockers daemon. Use root permission under Dockers carefully and try to run services under non-root privileges whenever possible. Download Dockers images only from the trusted source whenever necessary.

Krishna Kumar R is from Bangalore - the Silicon city of India - and is working in the Messaging Engineering Team of a leading international Financial Organization. He's been in the technology industry for 8 Years, and in that time has earned himself a Masters degree in Information Technology (Msc IT) and is a Microsoft Certified Technology specialist. He specializes in Exchange, Powershell and VB Script, and is a strong believer in the values of Automation and lateral thinking. Always keen to keep up-to-date with the latest technology, Krishna also maintains a personal blog at smtpport25.wordpress.com, and participates in Tech talks on Exchange and Powershell, as well as contributing in Technical Forums.

View all articles by Krishna Kumar

10 things everyone needs to know about Azure Cost management

0 1
1 – Azure Hybrid Benefit Azure services related to servers and direct infrastructure reservation require software licenses, such as Windows Server and SQL Server. Microsoft offers what’s called Hybrid Benefit. When the software license is required, the service provisioning process asks if you would like to use the hybrid benefit. If you already have on … Read more
0 1

0 1
Azure Cost Management is in constant evolution to help manage the cost of services in the cloud. Microsoft provides the Azure Cost Management Power BI App to manage cloud costs, but this app only works with Enterprise Agreement accounts. This was a considerable limitation, since many companies use the cloud using Customer Agreement instead of … Read more
0 1

0 25
In the past, working in .NET for non-Windows platforms has been dependent on third-party frameworks like Mono. Now, with VS2015 and DNX Microsoft have stepped up to provide everything you need to code multi-platform apps straight out of the box. Clive Tong introduces this new .NET technology.… Read more
0 25