Windows Azure started out purely as a PaaS (Platform as- a Service). Since then, it has responded to market demands by introducing Windows Azure Virtual Machine (WAVM) in which the virtual machine is persistent.

This article looks at the journey Windows Azure has taken from when it was first launched as a PaaS, to the newly announced IaaS offerings. In the later part of this article, I’ll also provide a quick, hands-on tutorial on how to set up a Windows Azure Virtual Machine.

As many of you might be aware of Microsoft started Windows Azure with PaaS (Platform as- a Service) model, generally available in February 2010.

With PaaS, Web and Worker Roles were introduced, customers only had to take care of the application and data, not the operating system and infrastructure. The stateless Virtual Machine (VM) concept was also brought into the picture. This means at the runtime, each VM should not store the data locally as it’ll be gone if the VM is reincarnated due to unexpected events, such as hardware failures. Instead, data should be stored in persistent storages such as SQL Database or Windows Azure Storage.

One primary advantage of this model is scaling in and out could be easily done. In fact, it’s just a matter of changing a parameter and within a few minutes the VM(s) will get provisioned.

Although since its launch many customers have adopted Windows Azure as a cloud platform, there have also been many unsuccessful deals because of various stumbling blocks, especially when migrating the existing applications to the PaaS model. The following summarizes two major challenges:

When talking about the effort involved in migration, a lot of it depends on the architecture of the application itself. I’ve written a series of articles on moving an application to the PaaS cloud model.

If you’ve decided to migrate your application to the PaaS regardless of the effort, what about bringing them back to on-premise? It might take more effort again. Alternatively, you could maintain two copies of your application source code.

Although there are some techniques to install third-party software on Windows Azure Stateless VM, the installation could be only done when setting up the VM; any changes at runtime wouldn’t be persistent. This restricts customers to install and run state-full applications on Windows Azure.

With feedback from customers and communities, an initiative of supporting Infrastructure as a Service (IaaS) was finally announced on 7 June 2012 at the Meet Windows Azure event. This is an interesting move by Microsoft bringing more powerful capabilities to the platform and also competing with other cloud providers.

Typically, the support of IaaS is implemented with Windows Azure Virtual Machine (WAVM). The major difference between this newly launched IaaS VM and PaaS so-called “Cloud Services” VM is the persistence. Yes, the IaaS VM is now persistent. Meaning that, any change that we perform at runtime will stay durable although the VM is reimaged. Aside from WAVM, the IaaS offerings are also supported with various new networking features. They offer a rich set of capabilities to establish connection amongst cloud VMs and also between cloud VM and on-premise network infrastructure.

Disclaimer: at the time this article was written, Windows Azure IaaS offerings including Virtual Machine are still in Preview. As such, any changes might be applied till the GA (general availability).

Windows Azure Virtual Machine utilizes the  backend Windows Azure Storage. As such, it inherits the highly-available benefit so that the VM image is replicated for 3 copies.

The VM is represented in a standard and consistent form of VHD file. Thus, the VHD can be effortlessly moved from an on-premise virtualized environment (Hyper-V) to Windows Azure or the other way around, or even to other cloud providers. This gives the customer lots of mobility, portability, and no lock-in experience. 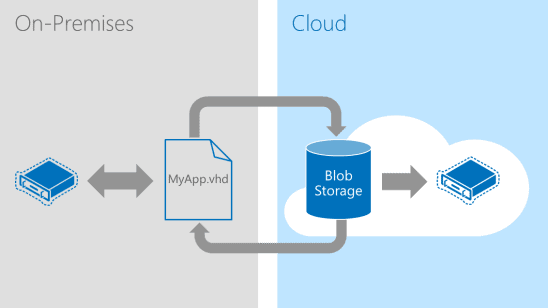 Windows Azure supports several versions of Windows Server and several distros of Linux as can be seen in the figure below:

Some of you might be surprise to see Linux distros are on the list. This proves that Microsoft is now heading in an open direction to reach more Microsoft and open-source customers. 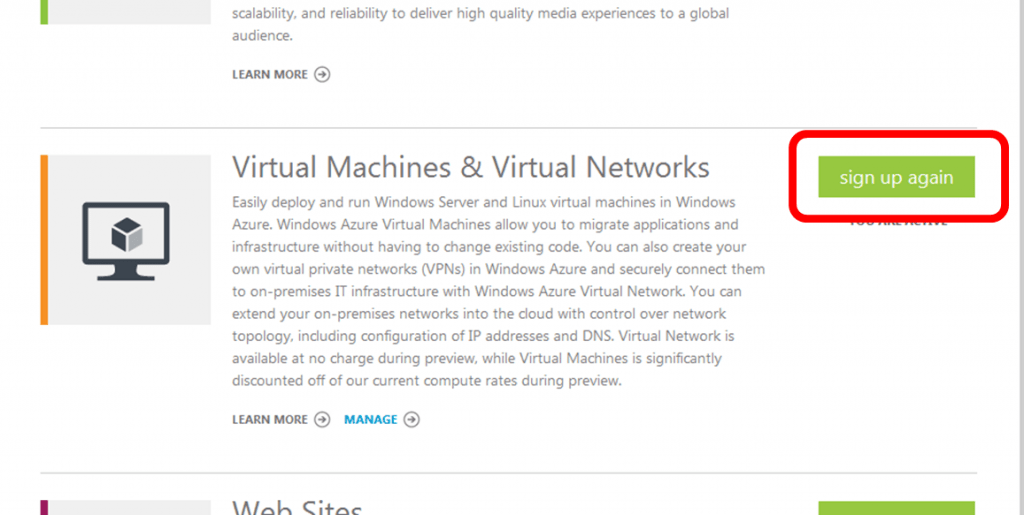 1. If you are ready with the subscription and preview features, log on to new Windows Azure Management Portal with your live ID and password. You will see the following screen if you’ve successfully logged in to the portal. 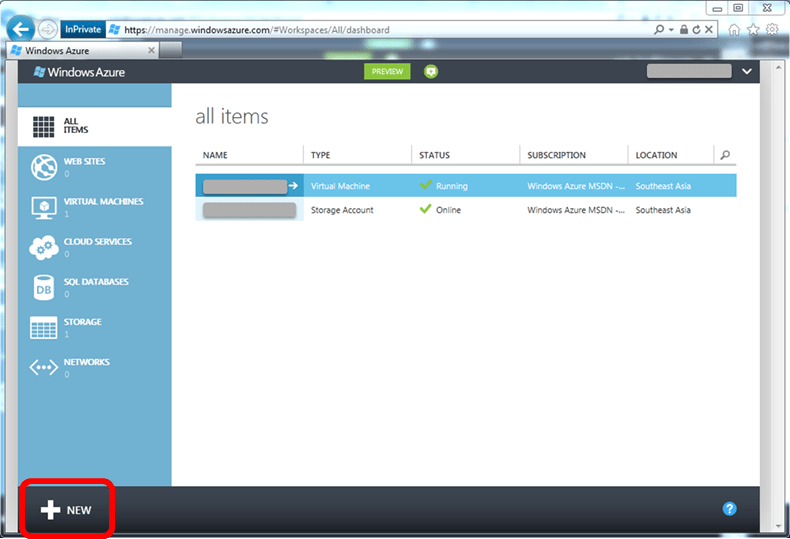 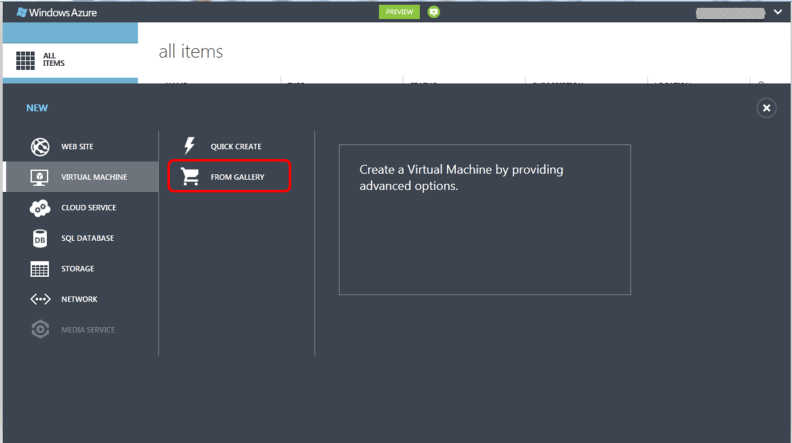 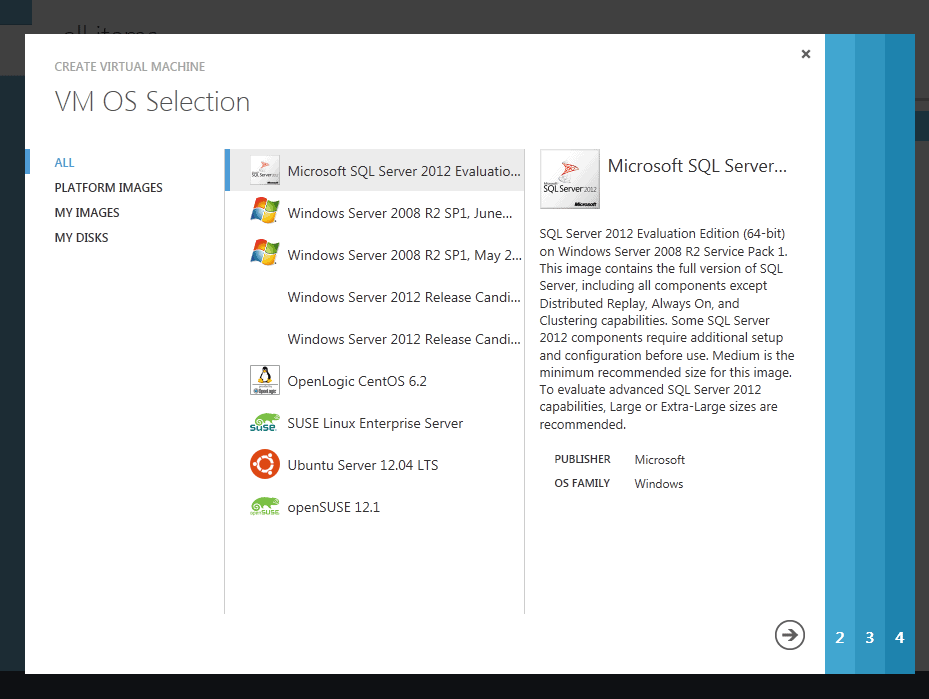 4. (VM Configuration Screen) The subsequent step requires us to fill in the VM configurations. Please remember your password; you will need to use it again in later steps. 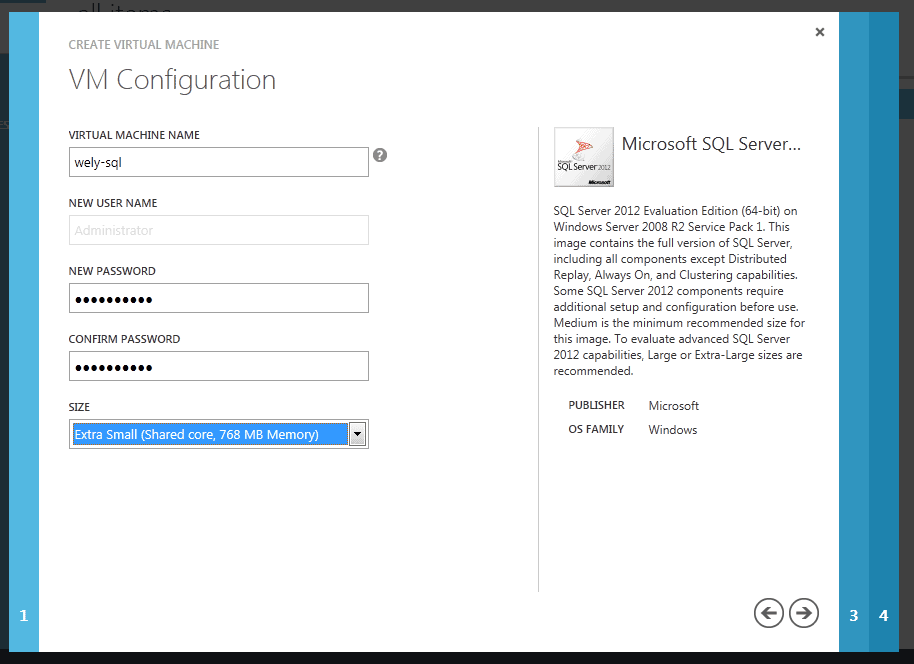 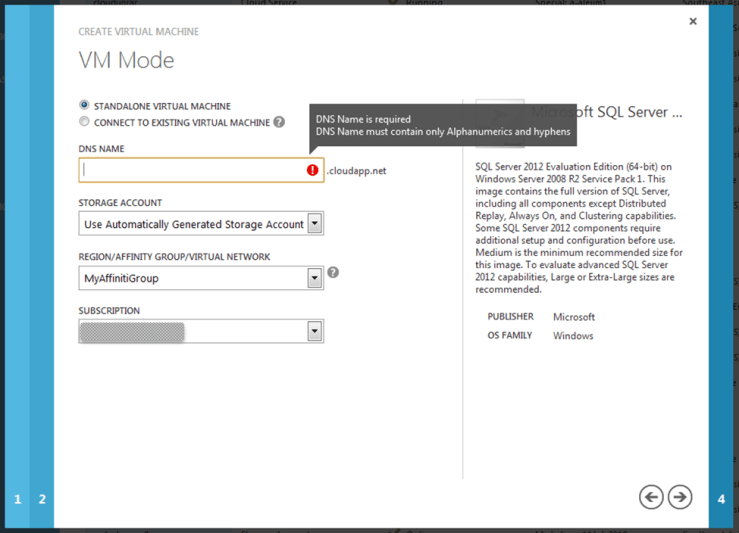 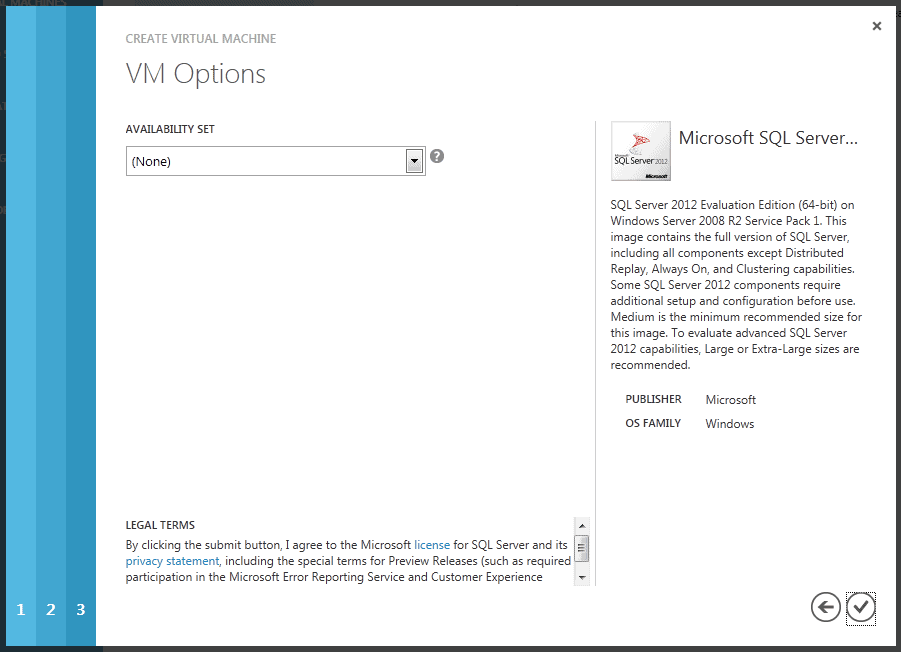 7. If everything goes well, you will see the VM is being provisioned. 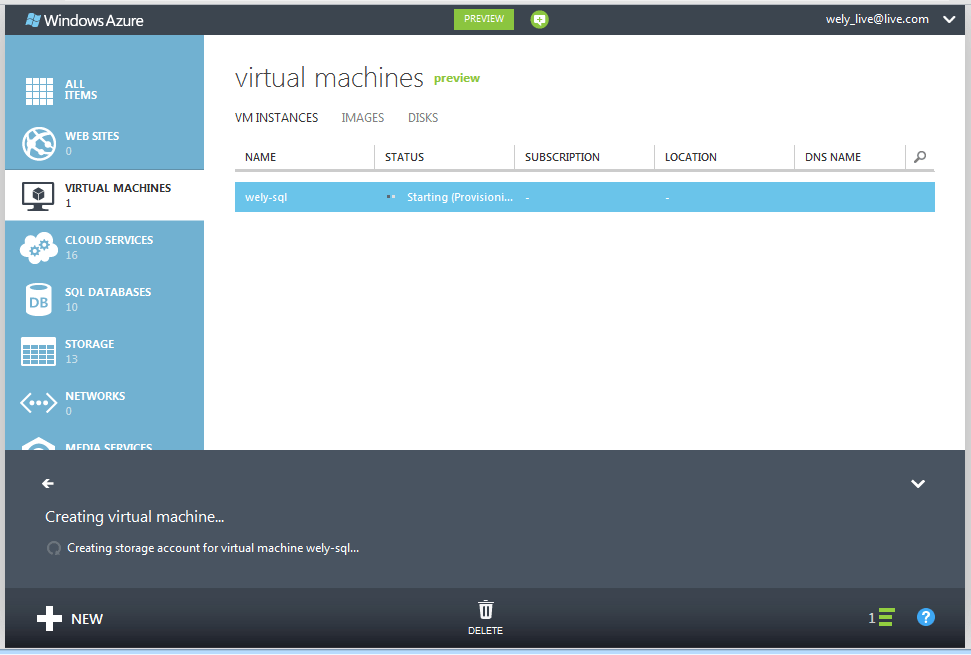 It might take few minutes for the VM to be ready; you will see the status change to Running. You can then click on the VM to see the details. 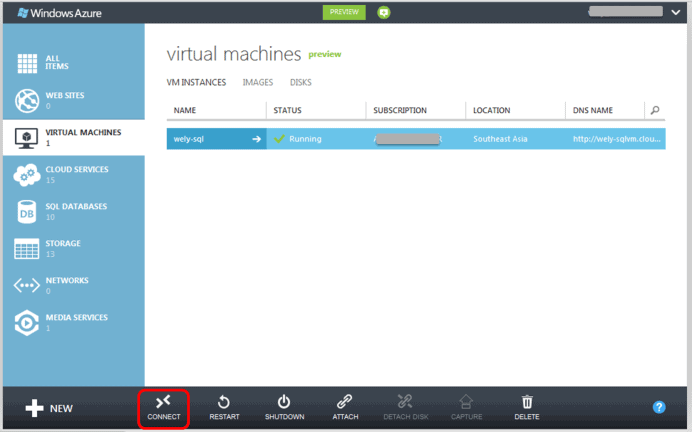 8. Clicking “Connect” will download a RDP file. Open the RDP file and you should see the Windows Security pop up. Enter the password that you specified in step 4. 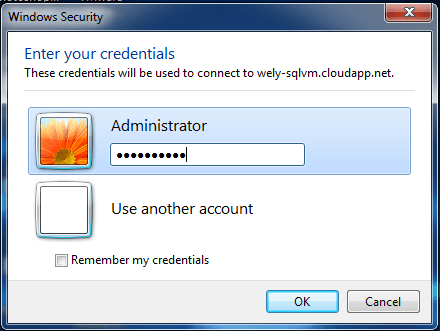 9. When it prompts you with the certificate error, just simply accept it by clicking “Yes”. 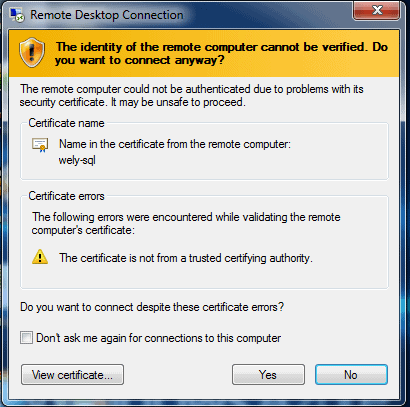 10. As can be seen, I’ve successfully RDP-in to the VM. Most importantly, any changes that we do now (at the runtime) will be persistent. 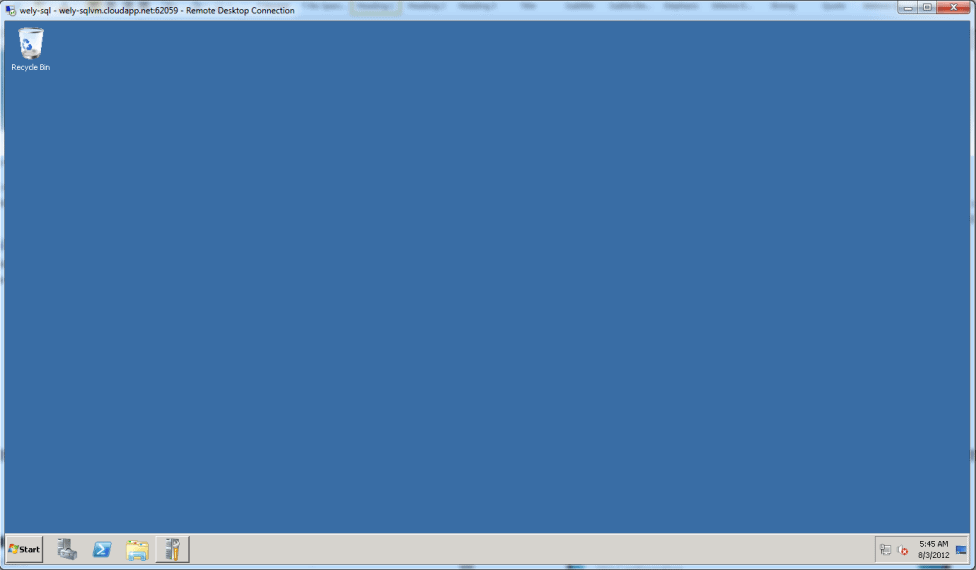 You can also see that SQL Server 2012 is pre-installed for us. 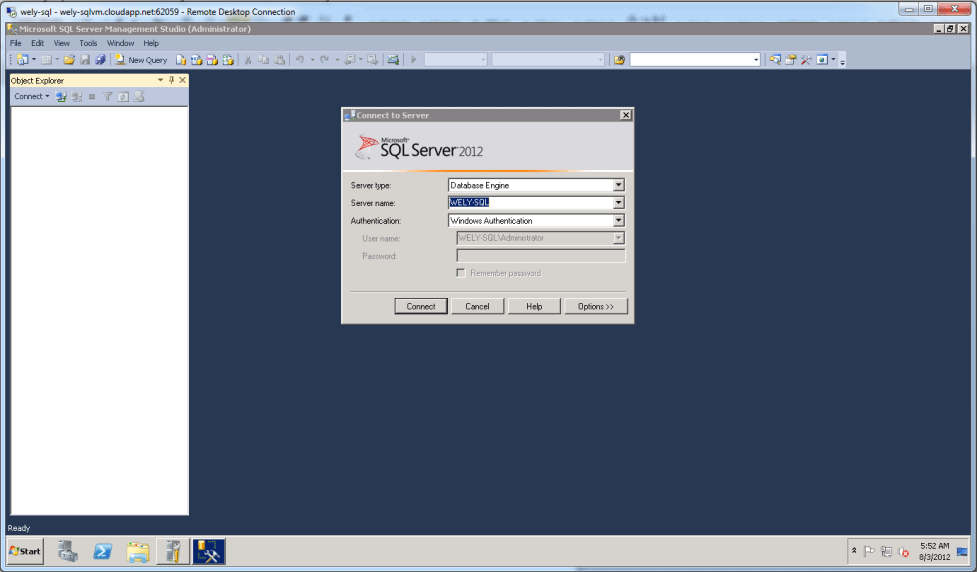 In the next article, we will continue to look at Windows Azure Virtual Machine in more detail, including disk and images concepts, networking features, the combination of PaaS and IaaS, and so on. Stay tuned.

How Essential Are Azure Policies

0 1
Policies in Azure are like Wally. They are there, but not obvious to find, hidden in the middle of many services, waiting for someone recognize their importance. Why do we need Policies Billing The billing control in Azure has by itself many different reasons to enforce policies. You, with your single Azure subscription, may think … Read more
0 1

0 1
Log Analytics is a basic tool for the entire Azure environment, I wrote about it before. The possibility to access log analytics data from a tool for analysis, such as Power BI, only increases its importance. There are some options to make this access and we expect these options to improve very soon. Using Notebooks … Read more
0 1

0 9
The whole point of using a cloud service is to be able to use it intensively for a brief period just when it is needed and then clear out all your work when you've finished. This means automation to make the process as quick and easy as possible. It is likely to mean creating a VM, provisioning it from scratch and spinning it up using PowerShell. Relax, grab the popcorn, and let Adam Bertram show you how he does it in Azure.… Read more
0 9

Azure, Cloud, Infrastructure as a Service