Recently I’ve been doing a few demos of ANTS Performance Profiler 6 at user groups, and last week I did a talk entitled “Real World Performance Profiling” at The Developers Group Meeting down in London, for which I’ll publish my notes later.

For both the demos and the talk I’ve been using an ASP.NET application, which my colleague Alex wrote some time ago: a simple Digg clone called Shovell. Originally this application used MS Access 2003 and ran in Cassini, otherwise known as Web Development Server, however I hastily converted it to use SQL Server and IIS, so that I could showcase the new SQL support in ANTS Performance Profiler 6.

I’ve been planning to publish the application for a while, and have finally got round to posting it up here, along with full installation and usage instructions. These are available in the readme included in the zip file, but I’ve also posted them here because it means I can put up some screenshots to point you in the right direction with IIS and SQL Server settings.

You’ll obviously also need ANTS Performance Profiler 6.0 if you want to profile the site, which is the main point of it. You can download a 14-day fully functional free trial from http://www.red-gate.com/products/ants_performance_profiler/index.htm. If you want to see information about what’s happening on SQL Server you’ll also need to be running on Windows Vista, Server 2008, or later. I’ve tested the application on Windows 7 64-bit Enterprise Edition.

The code for the site contains two different methods for choosing the list of articles to display:

You can choose which method is used by tweaking a setting in the web.config file (see below). You can also change the number of articles that will be displayed in the same way.

You may well find that IIS is not available by default on your system. If so you’ll need to enable it via Start > Control Panel > Programs and Features > Turn Windows features on or off. You must also ensure that ASP.NET support is enabled. Figure 1 shows the settings I’ve used. 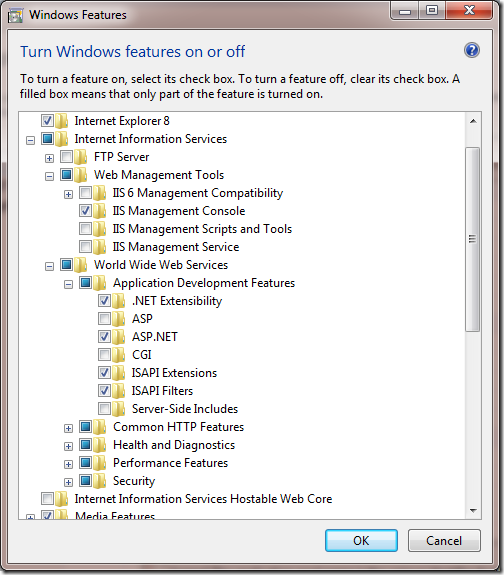 Figure 1. Enabling IIS. Note that for all unexpanded notes I’ve just accepted the defaults suggested by Windows after I checked the top level “Internet Information Services” node. I drilled down and checked “ASP.NET”, which also enables a number of other features, manually. Unless you’ve any particular reason to turn on any other features I’d leave them switched off because it’ll minimise system startup time, and also reduce the potential attack surface exposed by your machine.

Once you’ve enable IIS, you’re ready to install Shovell itself. There are a fair number of individual steps here, but they’re all pretty simple (NB. these are for IIS 7.5/SQL Server 2008R2, but you should find they’re good for IIS 7/SQL Server 2008 as well; earlier versions may require you to slightly alter these actions): 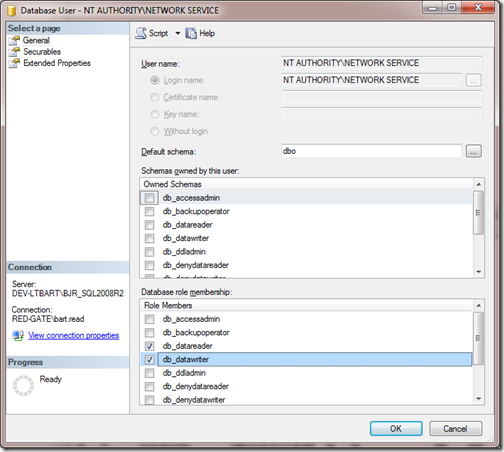 Figure 2. Assigning roles to user for IIS in ShovellDB database. 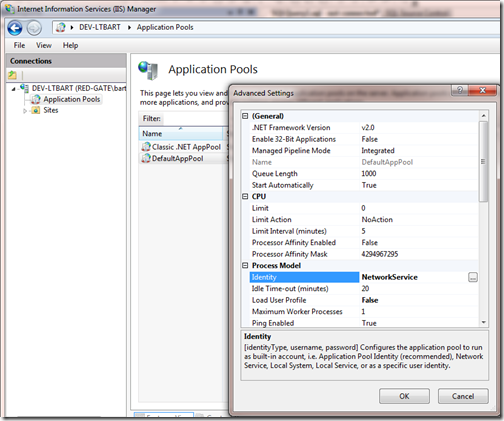 Now you should be ready to go. To test that everything’s working properly open your web browser and navigate to http://127.0.0.1/ShovellComplete/Shovell/. After a few seconds the web site should appear.

Note that there is also a web service and associated client that can be used to add articles to the site, but I haven’t used these as part of my demo so they are completely untested since the port to SQL Server. I have included them in the download, so if you fancy a play, go ahead. I have also included the original Cassini/MS Access version of the application in an enclosed zip file, should you wish to use them instead.

I mentioned that there are two modes in which the web app can run – naive and efficient. To switch between these modes:

You should find that in the naive mode it takes significantly longer to display the list of articles than in the efficient mode, and you should also be able to easily identify the bottlenecks with ANTS Performance Profiler 6. You should see that in the naive mode, whilst the biggest overhead is the sort, the SQL query also takes around 3-4 times longer to run, in general, than in the efficient mode.

PS. Apologies for the daft list item numbering – it’s down to Community Server, which just ignores/strips any attempt by me to restart numbering at any value other than 1. Inlining the images with the list items unfortunately doesn’t work either because it screws with the formatting.