.NET to iOS: From WinForms to the iPad

One of the great things about working at Red Gate is getting to play with new technology – and right now, that means mobile. A few weeks ago, we decided that a little research into the tablet computing arena was due, and purely from a numbers point of view, that suggested the iPad as a good target device.

A quick trip to iPhoneDevCon in San Diego later, and Marine and I came back full of ideas, and with some concept of how iOS development was meant to work. Here’s how we went from there to the release of Stacks & Heaps, our geeky take on the classic “Snakes & Ladders” game.

I’ve played with many operating systems in my time: from the original BBC Model B, through DOS, Windows, Linux, and others, but I’d so far managed to avoid buying fruit-flavoured computer hardware! If you want to develop for the iPhone, iPad or iPod Touch, that’s the first thing that needs to change.

If you’ve not used OS X before, the first thing you’ll realise is that everything is different! In the interests of avoiding a flame war in the comments section, I’ll only go so far as to say that a lot of my Windows-flavoured muscle memory no longer worked.

If you’re in the UK, you’ll also realise your keyboard is lacking a # key, and that ” and @ are the other way around from normal. The wonderful Ukelele keyboard layout editor restores some sanity here, as long as you don’t look at the keyboard when you’re typing.

I couldn’t give up the PC entirely, but a handy application called Synergy comes to the rescue – it lets you share a single keyboard and mouse between multiple machines. There’s a few limitations: Alt-Tab always seems to go to the Mac, and Windows 7’s UAC dialogs require the local mouse for security reasons, but it gets you a long way at least. 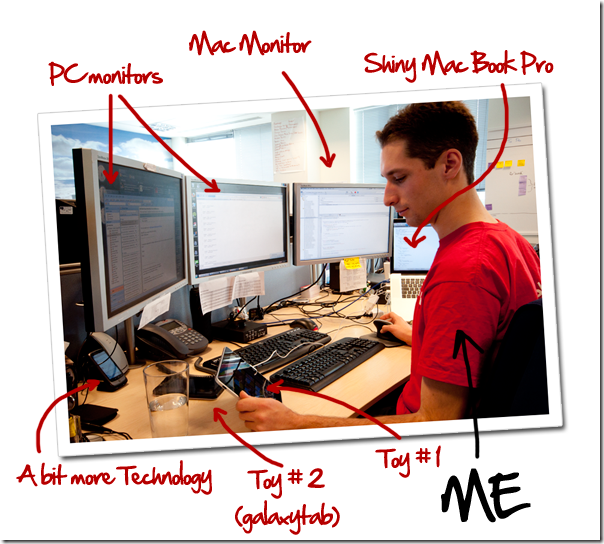 Step 2: Register as an Apple Developer

You can register as an Apple Developer free of charge, and that lets you download XCode and the iOS SDK. You also get the iPhone / iPad emulator, which is handy, since you’ll need to be a paid member before you can deploy your apps to a real device.

You can either enroll as an individual, or as a company. They both cost the same ($99/year), but there’s a few differences between them. If you register as a company, you can add multiple developers to your team (all for the same $99 – not $99 per developer), and you get to use your company name in the App Store. However, you’ll need to send off significantly more documentation to Apple, and I suspect the process takes rather longer than for an individual, where they just need to verify some credit card details.

Here’s a tip: if you’re registering as a company, do so as early as possible. The approval process can take a while to complete, so get the application in in plenty of time.

Objective-C is the language of the iPad. C and C++ are also supported, and if you’re doing some serious game development, you’ll probably spend most of your time in C++ talking OpenGL, but for forms-based apps, you’ll be interacting with a lot of the Objective-C SDK.

Like shifting from Ctrl-C to Cmd-C, it feels a little odd at first, with the familiar string.format(.) turning into:

Thankfully XCode’s auto-complete is normally passable, if not up to Visual Studio’s standards, which coupled with a huge amount of content on Stack Overflow means you’ll soon get to grips with the API.

You’ll need to get used to some terminology changes, though; here’s an incomplete approximation: 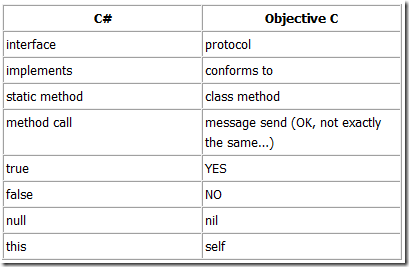 Coming from a .NET background, there’s some luxuries you no longer have developing Objective C in XCode:

Less specifically, I found that there’s more chance of code failing at runtime rather than getting caught at compile-time: using the @selector(.) syntax to pass a method signature isn’t (can’t be) checked at compile-time, so the first you know about a typo is a crash when you try and call it.

The solution to this is of course lots of great testing, both automated and manual, but I still find comfort in provably correct type safety being enforced in addition to testing.

Step 4: Submit to the App Store

Assuming you want to distribute to more than a handful of devices, you’re going to need to submit your app to the Apple App Store. There’s a few gotchas in terms of getting builds signed with the right certificates, and you’ll be bouncing around between XCode and iTunes Connect a fair bit, but eventually you get everything checked off the to-do list, and are ready to upload your first binary!

With some amount of anticipation, I pressed the Upload button in XCode, ready to release our creation into the world, but was instead greeted by an error informing me my XML file was malformed. Uh. A little Googling later, and it turned out that a simple rename from “Stacks&Heaps.app” to “StacksAndHeaps.app” worked around an XML escaping bug, and we were good to go.

The next step is to wait for approval (or otherwise). After a couple of weeks of intensive development, this part is agonising. Did we make it? The Apple jury is still out at the moment, but our fingers are firmly crossed!

In the meantime, you can see some screenshots and leave us your email address if you’d like us to get in touch when it does go live at the MobileFoo website.

Actually, that wasn’t the idea here: Stacks & Heaps is free; there’s no adverts, and we’re not going to sell all your data either. So why did we do it?

We wanted to get an idea of what it’s like to move from coding for a desktop environment, to something completely different.

We don’t know whether in a year’s time, the iPad will still be the dominant force, or whether Android will have smoothed out some bugs, tweaked the performance, and polished the UI, but I think it’s a fairly sure bet that the tablet form factor is here to stay.

We want to meet people who are using it, start chatting to them, and find out about some of the pain they’re feeling.

What better way to do that than do it ourselves, and get to write a cool game in the process?