Greetings from Tech Ed Orlando. What do Orlando and Microsoft keynotes have in common? Lots of hot air. Boom Boom! I’m sure I’m not the first or last to crack that lame gag.

The Orange County Convention centre is huge. I mean massive. I’ve been here at least twice before but I always seem to forget how big it is, and the misery of discovering that your next session is in a different “wing”.

This morning the taxi dropped us off in South wing and it was a full 20 minute slog over to the West wing keynote hall. And it is hot here, with humidity levels to warp the mind.

So was it worth the long and sweaty trek? Well, yes and no. After the two and half hours of Sunday night drudgery at Tech Ed 06 in Boston, my expectations weren’t high, but things kicked off in a lively enough fashion with a ‘Back to the Future’ skit featuring Christopher Lloyd. Chris and Bob M travelled back in time to revisit some previous Microsoft “visions” that failed to get off the ground or were just plain irritating.

Chris exhorted Bob to stick to the “real world” and things everybody could do right now. He departed with a threat to be back on stage to interrupt any “Vision-Speak”, or as he quite amusingly termed it, “MSVSBS”. 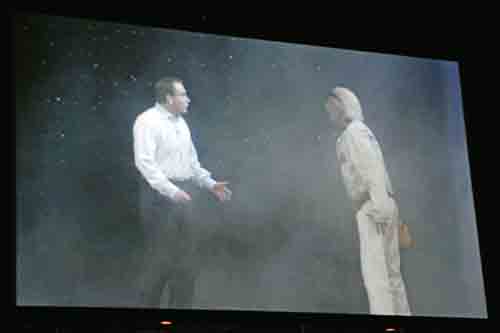 However, as the seemingly inevitable “People-ready” slide popped up, I was suddenly transported back in time myself, to the horror of the Boston keynote, but to be fair things never got quite that bad this time.

There was talk of providing “optimization models” to MS developers so they could discover opportunities for improving infrastructure, business productivity and application platform. Tom Bittman, VP of Gartner, emphasised the importance of agility as a key business differentiator in times of increasing, but increasingly short-lived, online business relationships.

The audience were perturbed. Who on earth could step in and make us all more agile before it was too late? By lucky hap, Microsoft was ready to step into the fray. Over the next hour or so, a variety of MS bods came on stage to explain what was coming in terms of:

I rather expected Christopher Lloyd to reappear one more time for a grand send off. It didn’t happen. Bob thanked us all for being here and we all headed out on a rather muted note.

How don't go mad with schema compare in SSDT

Eliminating the Fear of Missing Out (FOMO)

Many are finding the quarantine a net gain for mental health. Here’s why… The FOMO has been eliminated. There is no longer a “fear of missing out”. For the first time in memory, that type of FEAR is gone. There are no events, no places to be, nowhere to go…everyone is in the same boat. Our worlds are … Read more