It Takes a Crazy to Recognise a Crazy

Red Gate recently attended the Microsoft Professional Developers Conference in Los Angeles, CA, and when we weren’t consuming copious numbers of oysters and steaks, we found a lot of time to chat to attendees. I always seem to find myself having similar conversations with people during the course of a week. No bad thing of course, but it definitely means that the more interesting conversations always stand out.

The one that most definitely stood out for all of us was Joey deVilla. A Developer Evangelist for Microsoft Canada, Joey regaled us with some sweet, sweet music on his… accordion. To be precise, Joey serenaded a rather dazed and confused crowd around the Red Gate booth with a particularly unique version of Britney Spears debut single ‘… Baby One More Time’.

Alice could hardly contain herself, so we had to get a picture to remind ourselves of the musical masterpiece. As the saying goes, it definitely takes one to know one, and in this case it just had to be our very own Red Gate crazy that picked out another crazy from a crowd of thousands! 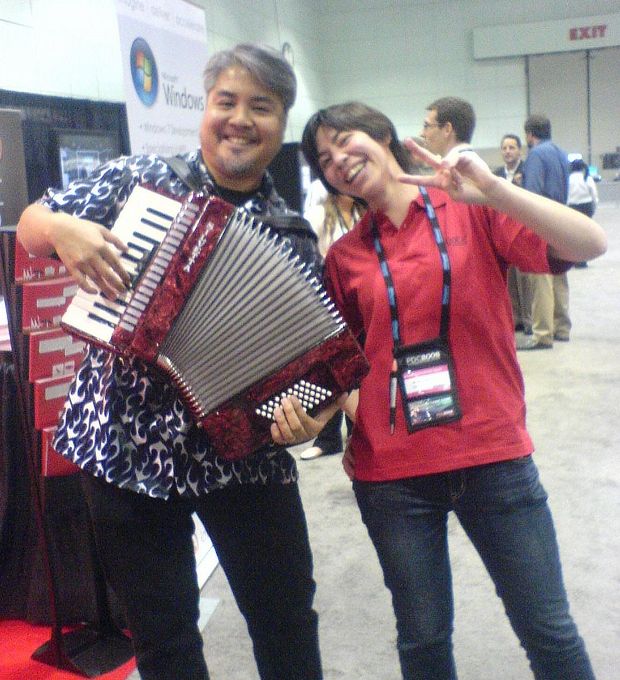 Joey deVilla, his accordion and Alice Easey at the Microsoft PDC

It’s worth noting that according to Joey’s business cards he will ‘play for beer’. I hope Alice kept his card. I think I might find out if he’s free for my birthday next year during Microsoft TechEd Developers …

View all articles by red@work

This new year start with the death of PASS, the professional association that for so many years supported the SQLFamily around the world and helped so many to achieve their professional goals. You can still read the communication, but PASS is ‘going dark’ on January 15, meaning none of its features and resources will be … Read more