Redgate DLM Automation and ReadyRoll, which feature in this article, have now become a single tool - SQL Change Automation. Find out more

Since writing this article, a number of Redgate product development changes have taken place. Some of the references in the article are now out of date, so here’s a summary of the changes that have taken place:

If you have any questions about automating the deployment of Database Projects using the latest versions of our database lifecycle management tools, please contact the DLM team for more information or an online demo: dlm@red-gate.com.

Generally, when users are implementing continuous delivery for their databases, using Redgate tools (SQL Source Control, SQL Automation Pack, Deployment Manager – see here for an overview), they are using Redgate’s own script folder format, working in SSMS, so that the database can be source controlled and managed as part of the delivery process.

However, we have users who are also using Microsoft’s Database Projects format, using SQL Server Data Tools (SSDT) in Visual Studio. Can these users implement Continuous Delivery for their database changes if using Database Projects format? Even if some on the team are using SSMS, and others Visual Studio? Yes they can! Hopefully this post will help any users trying to implement this strategy.

Pre-requisites – I’m using the following for my setup:

I won’t be going through the setup of these pre-requisites – setting up TFS 2013 is reasonably straightforward, as is, for example, provisioning a Windows Azure SQL Database through the Azure management portal. The Redgate tools can all be downloaded from the links in the first paragraph, and each have setup instructions.

There are a few other installations that need to be carried out along the way (for example, installing .NET 3.5 on the TFS build agent if absent) – I’ve included these in the steps below, to make clear why and where these are needed. Also, there are a number of gotcha errors that can occur – I’ve mentioned these, where appropriate. We’re currently working on significantly improving the TFS setup and install process – please get in touch if you’d be interested with helping with this research at ben.rees@red-gate.com.

Finally, this process can be just as easily implemented with different source control systems (for example, Git, Mercurial, SVN), build servers (e.g. TeamCity, Jenkins, Bamboo) and SQL instances – please get in touch if you hit problems with these configurations.

First of all I’m going to create a very simple database project in Visual Studio, with a single table.

Creating a Build Step in TFS to run Continuous Integration

Now that we’ve got our database under source control – in SSMS and Visual Studio – the next step is to create a CI process that kicks off whenever check-ins are made.

Setting up the build process in TFS is a little long-winded. We’re working heavily right now on improving the set up process (such that this post will become obsolete!). If you’re interested in helping with this work, possibly testing early versions, please get in touch: ben.rees@red-gate.com. 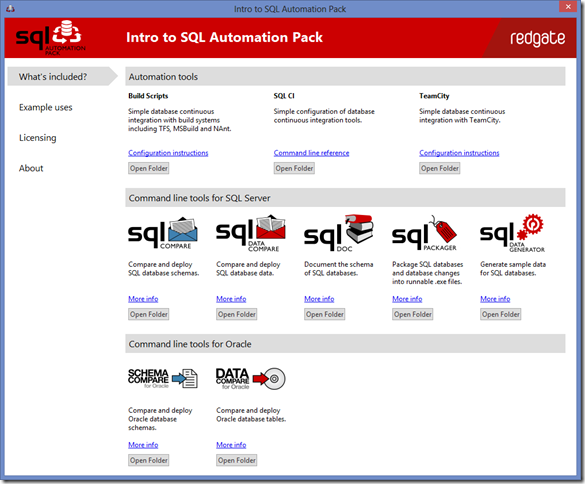 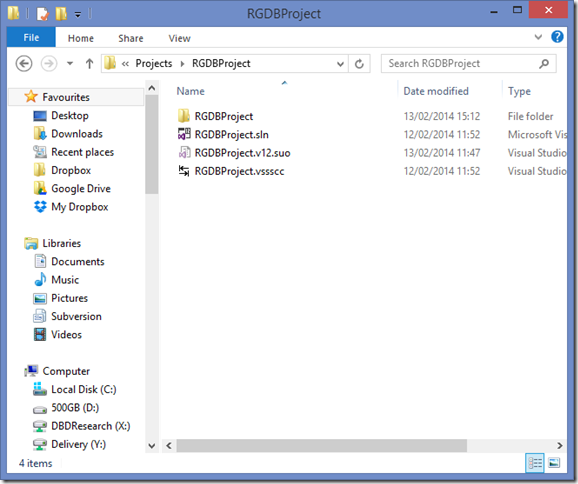 We now need to copy all of the files from the sqlCI folder (opened in step 2 above) to the root folder opened above. This will leave you with something like the following: 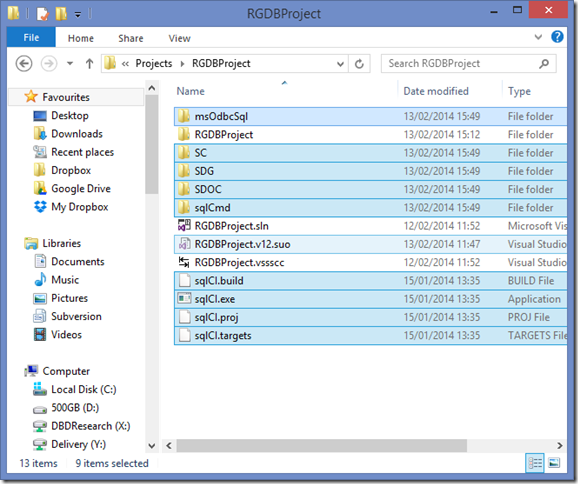 These files now need to be added to source control and checked in. The quickest way I found to do this was from the Team Explorer window. Under the Pending Changes tab, at the bottom, under Excluded Changes, is a link showing Detected: 265 add(s): 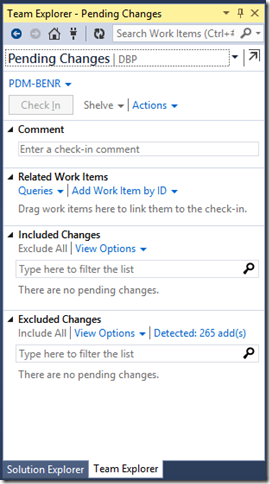 Clicking on this opens the following dialogue and allows you to promote the file to source control: 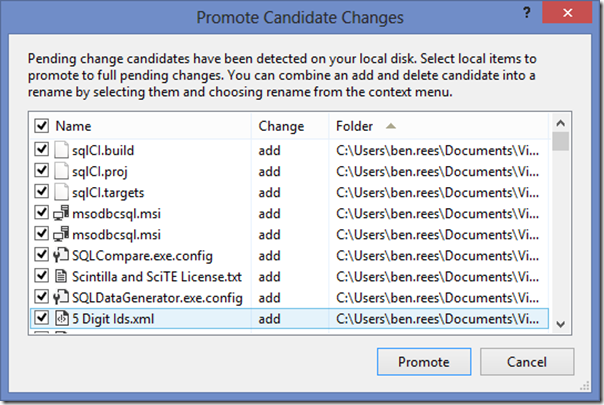 Once promoted (by clicking the Promote button), these files can be checked in by clicking on the Check in button in the Team Explorer window. Now we need to create a Build step in TFS. First, in Team Explorer (in Visual Studio), click on Builds: 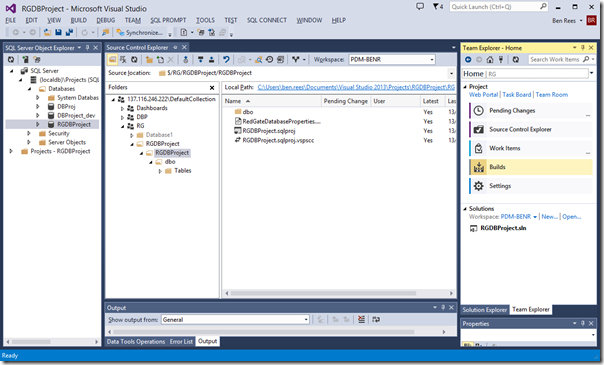 Then click on New Build Definition. This shows the following screen, with the build definition name pre-populated. For now, click the “Disabled” check-box – we’ll re-enable this later: 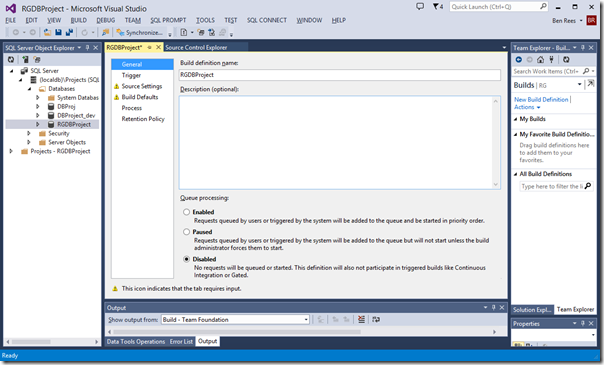 Then click on Trigger to go to the next step and here click “Continuous Integration – Build each check in”: 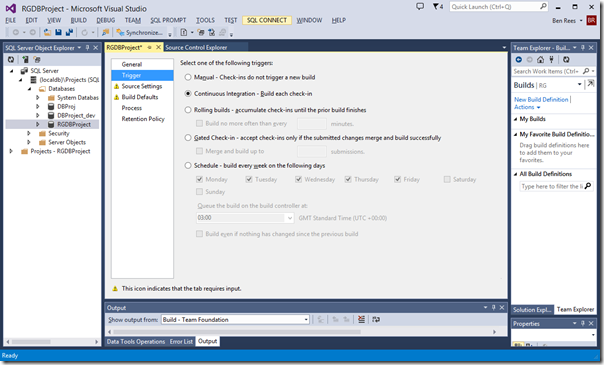 At the next step (Source Settings), enter the following: 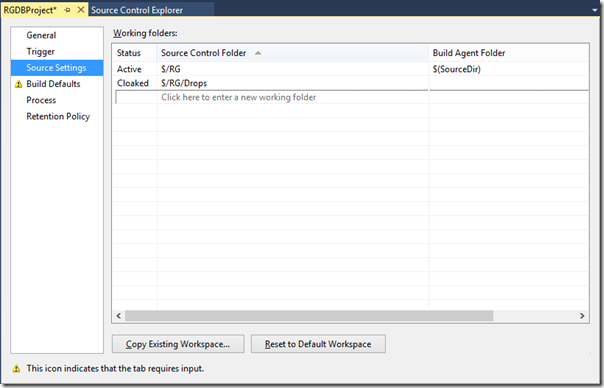 Next the Build Defaults. I’ve used a drop folder on the TFS Server called “\\localhost\Drops” (which I created on the server first): 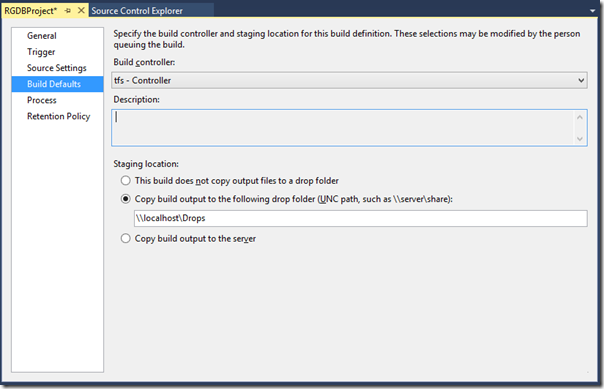 Next, the Process step. Here, you need to use an alternative build process template. This is so that build numbers can be correctly passed from TFS through to Deployment Manager package names. I’ve also added the template that I’m using to Dropbox here: 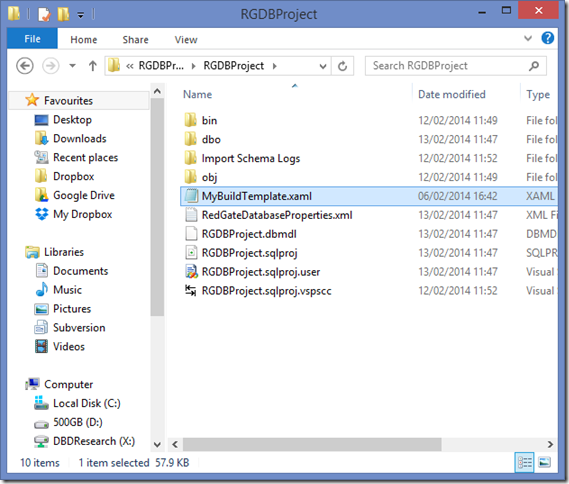 Then, this file needs to be added to source control and checked in. As before, I do this via the Team Explorer window. Under the Pending Changes tab, at the bottom, under Excluded Changes, is a link showing Detected: 1 add(s). Clicking on this opens the following dialogue and allows you to promote the file to source control: 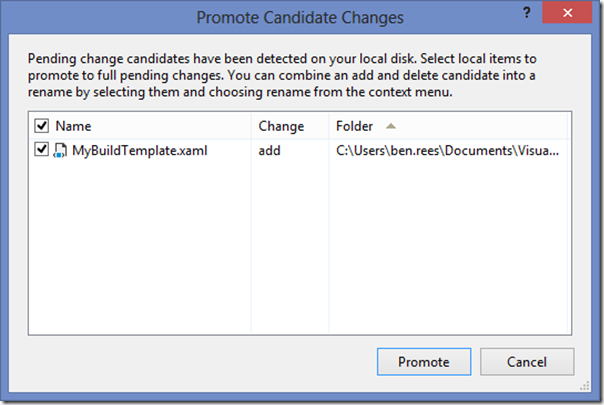 Once promoted, the file needs to be checked in (by clicking Check in). Once checked in, we need to return to the build setup (that we skipped out of, earlier) and select this file. In the build setup, in the Process step, click on the New… button to add in the template: 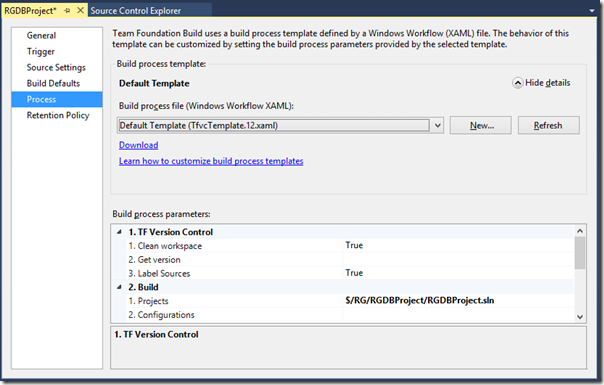 In the next pane, select the relevant file as shown below: 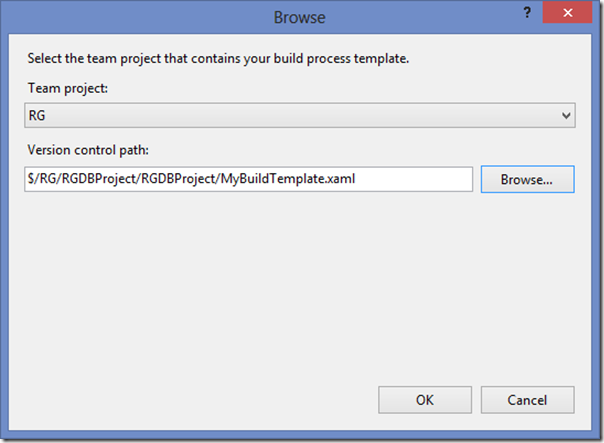 Returning to the build steps, this file should now be selected: 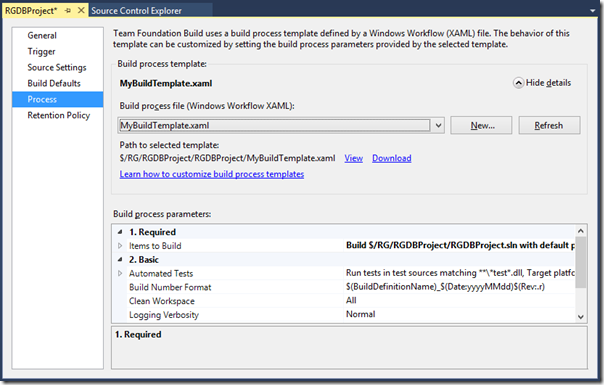 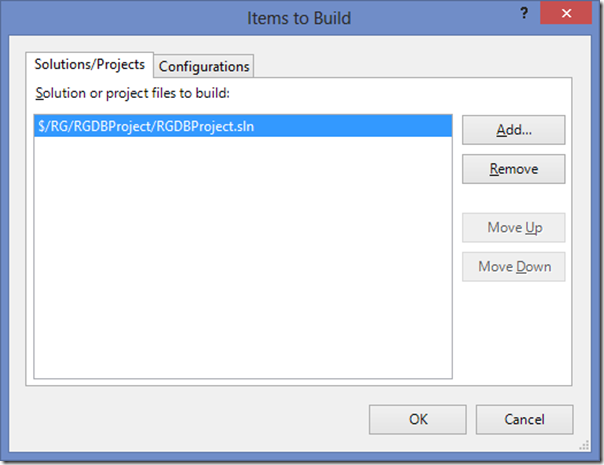 Remove this default item (the RGDBProject.sln file), and then click the Add.. button. In the resulting pane, select the sqlCI.proj MSBuild Project file from the appropriate folder. NB: you need to select “MSBuild Project files” from the “Items of type” drop-down: 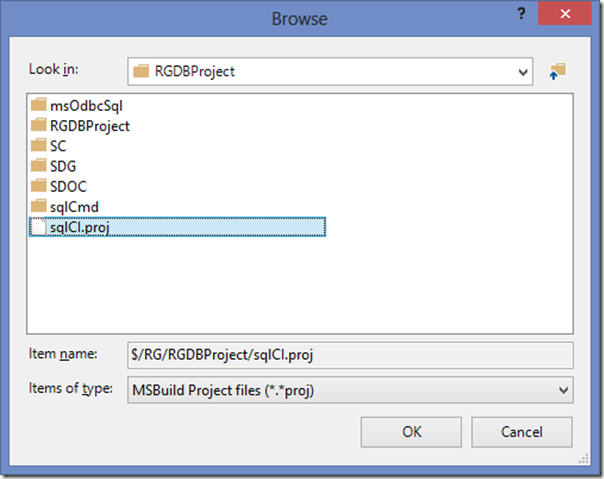 Click OK, then OK to set this in the build step. Press CTRL-S to save the build template.

Setting up the mock “Staging” and “Production” Environments

In addition to the (two) development environments set up above, I’m also going to create a “Staging” environment – which is going to be automatically updated by the CI process every time a change is checked-in – and a “Production” environment which I’ll update using one-click deployments from Deployment Manager.

For this, I’m using a SQL Database on Azure, though obviously you can use any environment accessible by the TFS build agent. E.g. you can’t have a TFS server hosted somewhere, on a different domain (or on an Azure VM, as I’m using), then use your local database instance – it won’t be able to see your local instance.

On your instance (or Azure SQL Database), create two new database called DBProject_Staging and DBProject_Prod. For this, I used the following commands in SSMS against my SQL Database instance:

I use Redgate’s Deployment Manager to manage the deployments from Staging to Production. NB: This is, obviously, a very over-simplified version of the setups and environments most customers have – often there are dev machines, integration machines, QA boxes, pre-production and production environments.

The following process installs and sets up Deployment Manager. I’ve installed the software on the same Azure VM that’s hosting my TFS server – this is generally no problem.

I’ve not gone through the full process here of installing the product. There’s an install guide here. I’ve set DM up with a single user, “administrator”, and I’m not using Windows Authentication.

Once installed, note down the URL for Deployment Manager – you’ll need this later. For example, mine is installed on http://tfs:81/.

We’ve created the build definition, but we still need to configure the sqlCI.targets file to configure the MSBuild task. This file contains all of the configuration data for the CI process to work – where the databases are, what tasks to run (unit tests? Data generation? Upgrade tests? and so on), and whether to create deployment packages or not. 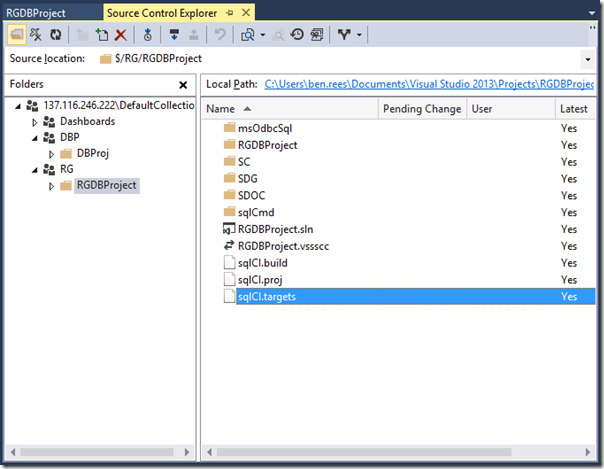 Trying the Build – and Debugging

This section will work through getting a build working on every database check-in. However, because there are one or two errors that can occur (if the build process isn’t set up correctly, as well as other errors), I’ve included these error messages to help others who might hit these problems – along with solutions. Of course if your environment is correctly set up from the start you won’t see these errors (and of course you could pre-empt and avoid these, by working through these resolutions first). 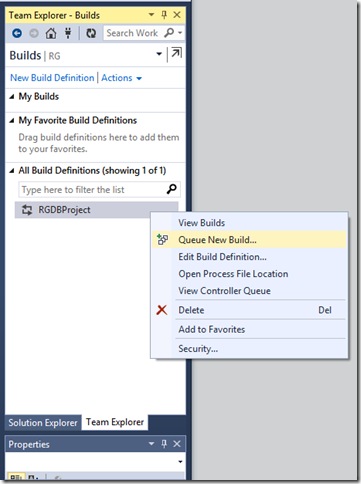 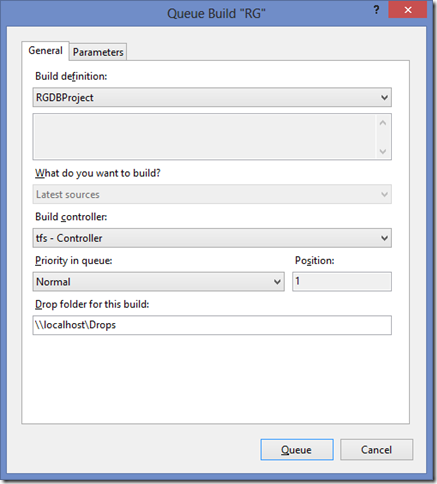 ‘sqlCI.exe’ is not recognized as an internal or external command

To fix this we need to add the sqlCI.exe and other executables to source control. Open Source Control Explorer in VS, right click the project and “Add items to folder”: 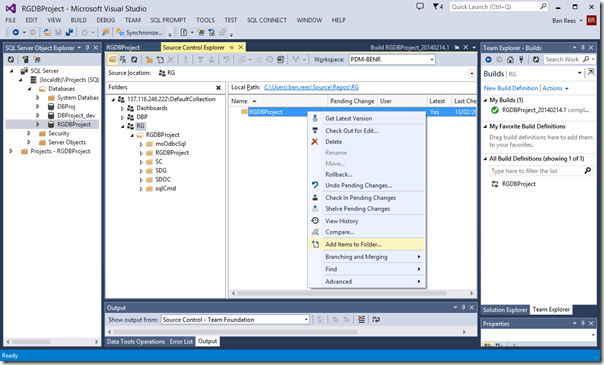 In the next screen, select everything (CTRL-A), then click Next: 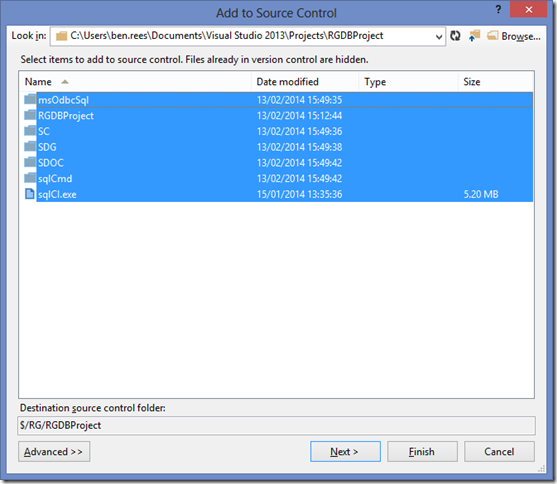 In the next screen, still a number of items won’t have been added. Click on the Excluded items tab at the top and again, CTRL-A to select all items. Then click the “Include item(s)” link at the bottom-right: 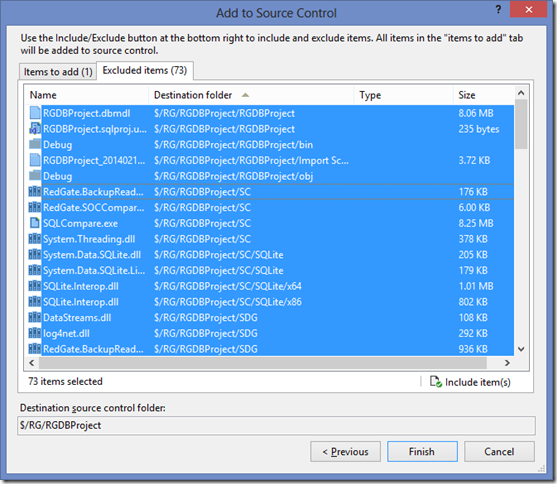 Click Finish. You then still need to check these items in to source control, by clicking on Pending Changes in Team Explorer and clicking Check in.

Finally, you shouldn’t need to re-queue the build at this specific point – the check-in above should re-run the build for you!

Making Changes to the Schema then Deploying to Production

So, the initial release has gone through. But the key functionality we’re adding is the ability to continuously integrate changes from both of our devs (one in SSMS, on in VS) on the Staging environment. 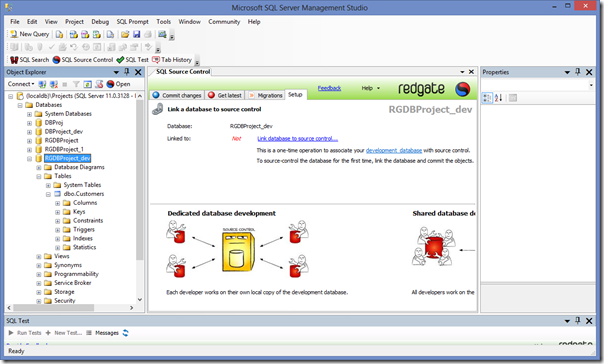 This is as much as I will cover in this post. As I say, this setup process is a little long – and we’re working on making this considerably easier – if you’d like to help with that process, let me know on ben.rees@red-gate.com.

There’s also much more that can be done, including:

And so on. But hopefully this enough to get you started running a continuous delivery process for Database Projects, using Redgate tools.

View all articles by Ben Rees