I sit next to this guy called Stephen Chambers. He is the Usability Engineer working on our next version of our code profiler, ANTS Performance Profiler 4. He is completely revising the UI of ANTS Profiler, and spends most of his time phoning developers asking what they would like to see in the next version, and then designing the new UI based on the feedback he gets.

Occasionally, you’ll hear some outbursts such as: “It’s getting hotter and hotter round heeere!” If you ask him what he’s on about, he’ll reply in an apologetic tone, “I can’t help it…. It really is very sexy!” That’s when I realise he’s talking about ANTS Performance Profiler 4 (APP 4) and the new design he’s working on. He’s contemplating the slick interface and clean lines of the profiler, summoning passers-by to come and check out “How god damn sexy it looks!”

So, the other day I asked for more detail. What exactly makes Stephen so animated?

He loves the one-click profiling concept. He spent a lot of time working on the opening dialog. No 52-step wizards – just a single screen. The opening dialog is implemented to allow immediate profiling. That way, users will be more inclined to use the tool a lot more frequently, because it’s so quick and easy. 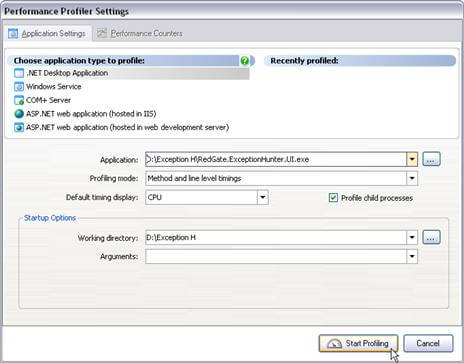 2. Much greater control for the user

The decision to remove the concept of ‘snapshots’ has produced an entirely new way of interacting with the profiler. Why confine the user to ‘snapshots’ when he could just choose any arbitrary period of time? Simply highlight any period of time (e.g. the creation of a Form), and see profiling results for that period.

With snapshots, you must remember to switch back to the profiler to take a snapshot, reset results, etc. The need to switch from a task to the profiler has now been removed. The user can perform any number of actions they wish and retrospectively analyze the performance of each task in as much depth as they wish.

3. Responsiveness of the interface

Stephen has so far organised over 15 hours of testing sessions with users of the Early Access Program of APP 4. I asked him about their feedback. It seems that participants to the usability sessions have been stunned by the speed at which the results for a given region are processed and displayed. This can equally be done while the profiled application is running or after it has exited.

Given the inherent complications of performance profiling, creating a front end that keeps things simple and immediate was a priority for Stephen. The UI went through several iterations and one of the main achievements of the APP 4 development team has been the reduction of options and windows on the main UI. Stephen seems to be getting a satisfying feeling watching a participant in a feedback session of APP 4 install it, set-up a project to be profiled and locate a performance bottleneck within minutes. The power of the profiler is as it should be – hidden under the surface with just the right number of options at the right time to give the user the power to examine the data in any way they feel like.

5. Not throwing the baby out with the bathwater

Talking to existing users of ANTS Profiler 3 revealed a huge amount about not only what features people would like to see in a new version but also what they really liked about the existing version. ANTS Profiler is well-known for its slick line-level timings feature, and some were concerned a new versions may present a ‘change for the worse’. APP 4 represents innovation in many areas, but preserves the features that people found genuinely useful in ANTS Profiler 3. We originally considered dropping the ‘All Methods Grid’, but this decision was quickly reversed upon talking to customers. Instead of a removal or total re-design, a number of subtle tweaks were made to simply freshen up its appearance and extend its usefulness. For example performance bars were added to heighten the visibility of poorly performing methods.

Figure 3: The fresher ‘All Methods’ grid in ANTS Performance Profiler 4

The code view has retained the iconic ANTS Profiler 3 red bars but we have tweaked its functionality by showing the currently selected method.

I find Stephen’s passion for his work impressive. He gets amazing satisfaction from watching users understand the features and options available, and listening to users saying “oh wow, that’s what I call a responsive profiler!” or “very clean interface!” Admittedly, a lot of work went into these things, so I guess, I can understand that…but I can’t help feeling a little uneasy when I see Stephen dancing on his chair, singing “ANTS Performance Profiler, Sexy Software…”!